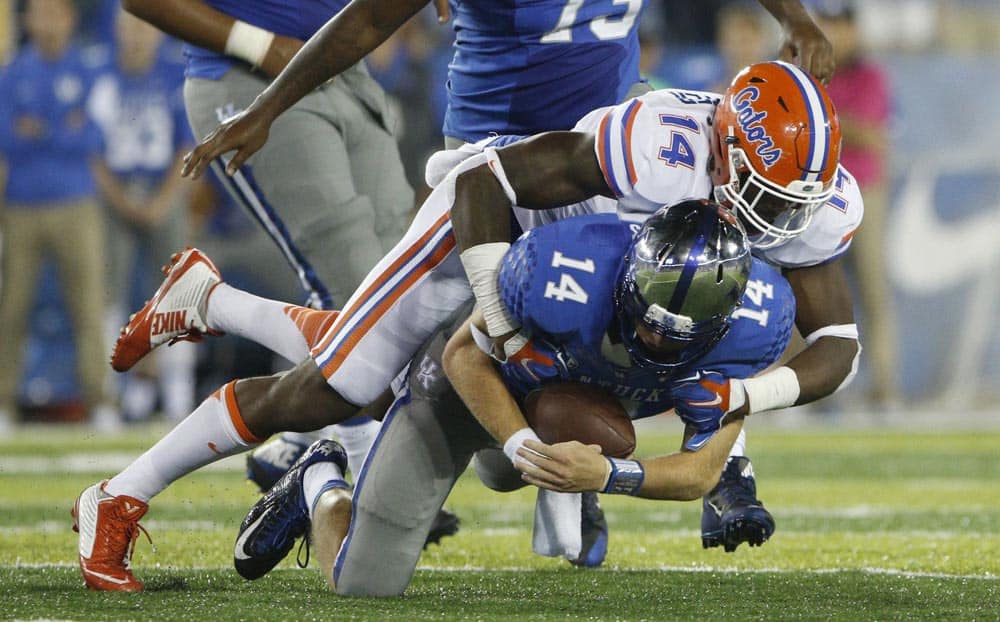 Among the endless number of FBS matchups on offer this season, a full two dozen feature a combination where one team has won at least ten straight games over the other.

Of these, 21, or 88%, are in-conference matchups. All five of the Power leagues are represented as are the American and MAC. That leaves just the C-USA, Mountain West, and Sun Belt devoid of a double-digit streak.

The Big Ten leads the way with five lopsided combos and have two of the top three. The SEC is next with four (including the longest streak on the line in 2018) and the Big 12 and Pac-12 follow with three each. The ACC, American, and MAC all have two apiece.

2006 was also the last season Alabama posted a losing record, finishing 6-7 under Mike Shula. Arkansas went 10-4 in ’06, finishing No. 15 in the AP in what was Houston Nutt’s second-to-last season in Fayetteville. The Hogs have only reached double-digit wins twice since.

2007 was Nick Saban’s first year at Alabama, the loss in Starkville the second of four straight to close out the regular season. The Tide’s 7-6 final record marked the last time they didn’t achieve ten-plus wins and finished out of the AP Top 25. Mississippi State went 8-5 that season, the only winning mark in the five-year Sylvester Croom era.

Not only has Florida State not lost to Syracuse in 52 years, it’s only fallen to the Orange once in history. The Seminoles are 10-1 all-time vs. Syracuse and 5-0 since the Orange joined the ACC in 2013. FSU went 6-5 in ’66, losing to Wyoming in the Sun Bowl. Syracuse, headlined by leading rushers Larry Csonka and Floyd Little, finished 8-3 and lost to Tennessee in the Gator Bowl.

Eastern Michigan has managed a win over Northern Illinois only twice this millennium, also winning the 2000 game 39-32 in Ypsilanti. The ’07 Huskies finished 2-10, their lowest mark since 1998. It led to the end of the Jay Novack era and the dawn of Jerry Kill’s three seasons in DeKalb.

The Bruins win over Stanford in 2008 was their fifth consecutive over the Cardinal. It was also the last time Stanford posted a losing record – a 5-7 mark in what was Jim Harbaugh’s second season. For UCLA, the win was one of only four that year, Rick Neuheisel’s first year on the job.

The SEC didn’t do Tennessee any favors when it made Alabama its permanent cross-division rival. As mentioned above, the 2006 Tide were the last squad to play without Nick Saban on the sidelines. Tennessee, on the other hand, was fewer than three years away from the exit of Phillip Fulmer who would leave after the 2008 season. The Volunteers were ranked at a season-high No. 7 coming into the game vs. Alabama. After dropping back-to-back games to (13) LSU and (11) Arkansas in November, the Vols lost to unranked Penn State in the Outback Bowl and finished 9-4 and ranked No. 25 in the final AP.

The Tigers and Green Wave have only missed being co-members of the same conference once since 1996: in 2013 when Tulane stuck around in Conference USA for an extra season before following Memphis to the American Athletic. The 2000 Green Wave finished 6-5, one of only three times they’ve eclipsed .500 in the new millennium.

Penn State and Rutgers were both independents the last time the Scarlet Knights scored a win. The Nittany Lions finished the 1988 season 5-6, tied for the fourth-worst mark in the entire Joe Paterno era. For Rutgers it was one of two wins over teams ranked No. 15 that season (it beat No. 15 Michigan State in the opener). Despite that, it finished 5-6. Penn State leads the all-time series 26-2, the only other loss was a 26-3 decision 100-years ago in 1918.

Eastern Michigan’s win over Toledo in 2006 was its sole win of the season, coming directly after it played five of its first six games on the road. For the Rockets, the loss led to a 5-7 finish, the first of four consecutive losing seasons. The tide turned in 2010 in Tim Beckman’s second season with an 8-5 mark.  Toledo has managed to stay well over .500 ever since.

UCF’s only-ever loss to Memphis came 28 years ago, also the Knights first season as an FCS team. Despite losing to the Tigers, they went 10-4 and lost to Georgia Southern in the semifinal round of the Division I-AA playoffs. Memphis has never beaten UCF in an FBS vs. FBS matchup.

Cincinnati has won 12 straight Victory Bells vs. Miami, the longest winning streak in the 122-game history of the series. The two schools are located a mere 40 miles apart. The ’05 Bearcats went 4-7 under second-year head coach Mark Dantonio. It was also UC’s first season in the Big East. For Miami, the win was a part of a 7-4 campaign, the best finish to date except for the 10-4 run in 2010.

The last time the Badgers fell to the Boilermakers was also one of only three times since that Wisconsin has failed to finish the season ranked in the final AP. For Purdue, the win was part of a 9-4 campaign, the program’s best finish since 1998. The No. 18 nod in the postseason AP was also the last time the Boilermakers appeared in the final poll.

Kansas’ last win over Oklahoma marked their third consecutive victory over the Sooners, a feat it’s only achieved twice before in history but not since 1924. Oklahoma was one season away from hiring Bob Stoops in 1997, its 4-8 record under second-year coach John Blake the fourth-lowest mark in program history.

USC was ranked No. 3 when it last loss to Cal, the shocking upset the only misstep in a 12-1 campaign that ended with the first of its two consecutive national titles under Pete Carroll. For the Golden Bears, it was the highlight of an 8-6 finish with second-year head coach Jeff Tedford. It was also the last time they beat a member of the Top 5.

It’s been 15 years since Virginia won the Commonwealth Cup, also the only victory over the Hokies in its last 19 tries. 2003 was Virginia Tech’s final season in the Big East, the 8-5 finish failed to put them in the postseason AP for the only time from 1998-2011. Virginia also went 8-5 that year, Al Groh’s second in Charlottesville.

2003 was the same year the Badgers fell to Purdue, part of a late-season, three-game skid that included a 16-7 loss at Northwestern. Minnesota was ranked No. 24 at game time and rose to No. 19 in the following week’s AP before falling at (20) Iowa. It jumped back up to No. 20 after edging Oregon in the Sun Bowl, also the last time the Golden Gophers received mention in the final AP.

Details are sketchy on Louisiana Tech’s only-ever victory over LSU. The game was played on a Sunday in Ruston, just seven days after the two schools met in Baton Rouge, a game the Tigers won 17-0. It must of come as a shock, as LSU won the first three meetings in the series by a combined score of 90-0 and the subsequent five by a margin of 256-0. The Bulldogs didn’t score another point on the Tigers until managing a safety in 1913 and didn’t reach the end zone again until 1929.

Arkansas was ranked No. 12 coming into its loss to Tulsa in ‘76. The defeat was a part of a 5-5-1 finish, Frank Broyles’ final as a head coach before switching full time to his job as Athletic Director. Tulsa went 7-4-1, also scoring wins at Louisville and at Virginia Tech before falling to McNeese State in the Independence Bowl.

(15) Indiana – fresh off wins at (9) Ohio State and at Minnesota – was ranked higher than (20) Michigan coming into the 1987 game. Though the Hoosiers soared as high as No. 11 in the AP, they fell out completely after losing three of their last five including falling to (17) Tennessee in the Peach Bowl. Michigan went 8-4 that year and finished at No. 19 after edging unraked Alabama in the Hall of Fame Bowl.

Indiana’s blowout win over unranked Ohio State was its second-straight victory over the Buckeyes, marking the only time it scored back-to-back wins in the series since 1913. The ’88 Hoosiers went 8-3-1 and beat South Carolina in the Liberty Bowl. Their No. 20 final rank in the AP was their last mention in the postseason poll. Ohio State skidded to a 4-6-1 record under John Cooper, the fourth-worst mark in program history.

The longest winning streak on the line in 2018, Kentucky came one-point shy of history last season in Lexington, losing 28-27 after allowing two fourth-quarter touchdowns. The last Wildcat team to best the Gators finished 5-5-1 and 2-4 in SEC play, the only other win over Vanderbilt. For Florida, the loss was part of a 6-5 campaign, the beginning of the four disappointing seasons that eventually ended the Galen Hall experiment in Gainesville.

Nice write up! I didn’t realize there were so many long streaks.

As a reminder, 2000 was not part of the current millennium.

Here’s hoping that some of these streaks come to a close this year. It would at least make for a more interesting season.