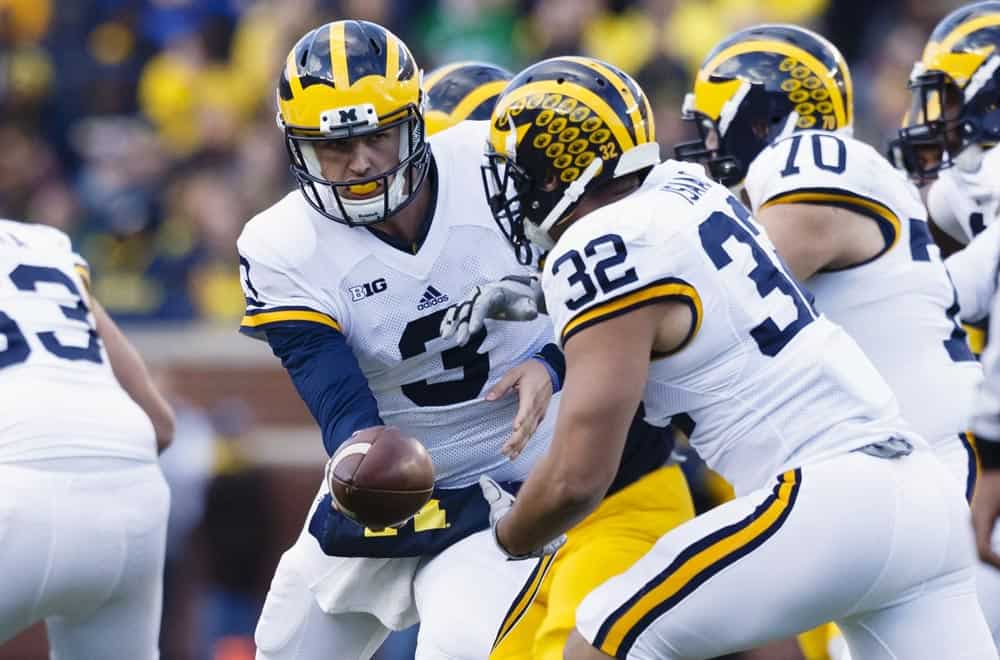 It’s no wonder why so many programs “pad” their schedules with an FCS opponent.

Among the honor roll of FBS teams without an FCS school slated this season, 12 – or 56% – are Big Ten members. This is due to the conference legislating, in 2013, that its programs not schedule FCS opponents. This dictate was modified in 2017 to allow FCS games during years that members have only four league games at home.

That leaves just ten FBS programs that don’t have an FCS opponent scheduled in 2018 without being forced to do so. The Pac-12 leads the way with three such members and the MAC and Big 12 are tied for second with two apiece. That leaves the Mountain West, C-USA, and Independents with one representative each.

No member of the ACC, SEC, American Athletic or Sun Belt will play an FCS-free schedule.

Arizona State also took last season off from playing an FCS school, most recently beating Northern Arizona 44-13 in the 2016 season opener. Before that, it was 2007 when the Sun Devils went FCS-less.

The Big Ten’s partial ban on FCS scheduling is a big change for Indiana, which has played such an opponent 15 of the last 17 seasons. Since 2002, the only years the Hoosiers didn’t book an FCS foe was in 2004 and 2016.

Maryland’s schedule hasn’t been without an FCS program since 2005, meaning the Terps have played 12 straight against the FCS. They’re a perfect 12-0 in those games, including wins over James Madison in 2009 and Towson in 2011. These victories accounted for half the win total in seasons that both ended at 2-10.

One of two MAC members mentioned here, this is Miami’s first FCS-free schedule since 2013. Unlike Maryland, the Redhawks are 2-2 vs. the FCS in their last four; topping Austin Peay last season, falling to Eastern Illinois in 2016, beating Presbyterian in 2015 and losing to Eastern Kentucky in 2014.

Though Michigan hasn’t made a practice of scheduling FCS opponents, it did host back-to-back games with Delaware and UMass (the Minutemen moved up to the FBS in 2012) in 2009-10 and then fell, memorably, to Appalachian State (moved to the FBS in 2014) to open the 2007 season.

Michigan State has a spotty recent history with FCS foes, playing four such opponents in the last 10 seasons. Prior to 2008, it was 1948 when the Spartans played a non-major, hosting Hawaii in the back end of a home-and-home and winning 68-21.

FCS opponents became a fixture on Minnesota’s schedule starting in 1999. The Gophers have only missed playing such a foe five times since then including playing nine straight from 2006-14.

Like Michigan State, Nebraska has had an inconsistent relationship with the FCS. Though the Huskers haven’t had an FCS team on the slate since 2014, they played five straight from 2010-14 and three consecutive from 2004-06.

The second of the two MAC members, Northern Illinois hasn’t played an FCS-free slate since 1997. The Huskies are 15-5 vs. the FCS during that stretch, falling most recently 28-23 to Western Illinois in 2016.

Prior to taking 2017 off from FCS action, 2005 was the last time Northwestern didn’t play down a level. It was a turning point in Wildcat scheduling as before that they hadn’t booked a non-major since traveling to Princeton in 1986 and winning 37-0.

Notre Dame is one of three programs listed that simply don’t schedule FCS opponents. The last time the Irish played a team considered a non-major at game time was in 1941 when they traveled to Carnegie Mellon in Pittsburgh and beat the Tartans (now a Division III program) 16-0.

Ohio State booked an FCS opponent as recently as 2013 when it hosted Florida A&M and blew out the Rattlers 76-0. Before that it was 2007 and 2008 when the Buckeyes opened both seasons with back-to-back wins over Youngstown State.

Like Ohio State, Oklahoma’s most recent foray with an FCS school came against Florida A&M. The Sooners 69-13 win over the Rattlers came in 2012, one year before the Buckeyes’ victory. Prior to that, Idaho State visited Norman in 2009 and got grilled 64-0.

Penn State booked an FCS foe as recently as 2011, beating Indiana State 41-7 to open the season. It was the Nittany Lions fourth-straight FCS opponent and fifth in six years. Before that it was 1984, a visit from William and Mary (who played as a couple) that ended in a 56-18 win.

Purdue’s 51-10 win over Illinois State to open the 2002 season marked the beginning of the Boilermakers’ regular relationship with the FCS. Since then, they’ve faced such an opponent every year with only four exceptions; 2003-04, 2009 and 2017. Purdue hasn’t lost to an FCS school during the stretch. This is especially significant from 2013-2016 when the Boilermakers posted a 9-39 mark. Four of the nine wins during this period – or 44% – were over FCS opponents.

This is Rutgers’ first FCS-free season since 2003, which was also Greg Schiano’s third season at the helm. Like Purdue, the Scarlet Knights have enjoyed a long stretch of success vs. the FCS, winning 14-straight from 2005-17. This included doubling up and beating both Howard (45-7) and Texas Southern (42-0) in 2009.

Though Texas doesn’t make a habit of booking FCS schools, it did host Sam Houston State as recently as 2006, winning 56-3. Prior to that it was 1992 when the Longhorns welcomed North Texas (then a member of the Southland conference) and won 33-15.

Like Notre Dame, UCLA doesn’t schedule FCS opponents. The last time the Bruins played a non-major was 64-years ago, in 1954, when they opened with a 67-0 win over San Diego Navy Training Center. The victory kicked off a 9-0 campaign for UCLA, outscoring their opponents 367-40. The Bruins split the national championship – their only in program history – with Ohio State.

USC is the third of the three FBS programs that don’t book dates with FCS opponents. The Trojans haven’t scheduled a non-major since 1952 when they, like UCLA, welcomed San Diego Navy Training Center. The 20-6 win was a part of a 10-1 finish that included a 7-0 win over (11) Wisconsin in the Rose Bowl.

Though Wisconsin hasn’t booked an FCS opponent in three seasons, it played eight straight from 2006-14. Prior to that it was 2001, a 24-6 win over Western Kentucky, one year before the Hilltoppers won the Division I-AA (FCS) National Championship under coach Jack Harbaugh.

For what it’s worth, Texas probably currently considers itself on the list of teams that don’t schedule FCS teams. As a fan and alum, I remember the Sam Houston State situation. It was the first season after the NCAA had okayed teams playing 12-game regular season schedules and Texas, like many teams, rushed to add whoever they could. Between the game being put on pay-per-view and fans just negatively reacting toward the FCS competition, Athletic Director Dodds assured us that it wouldn’t happen again.

I don’t recall whether or not there was more to the policy than him assuring us, and obviously we are a few ADs removed from Dodds at this point, but I’ve seen nothing to suggest that they are going to change back.

Not one ACC and SEC team. Pansies!!

For the author of this article–you should fire your researchers! Re: Rutgers—Greg Schiano has been Defensive Coordinator at The Ohio State University for the past few years and NOT HEAD COACH of Rutgers. Rutgers Head Coach is Chris Ash, who also coached defense at tOSU.

She just means that 2003 was Schiano’s third season at Rutgers.

I believe she means 2003 was Schiano’s third season at the helm. She is making the comparison that the same thing is happening in Chris Ash’s third season.

When we get to the end of the year and we are analyzing a B10 team vs an ACC or SEC team, this has to matter. Forget that B10 teams in large do not play FCS teams (94% winners), they also play 9 conference games. This equates to the B10 automatically having 7 extra losses spread across the conference, making it exponentially more difficult to go 12-0 or 11-1 than in the ACC and SEC. In my mind, an 11-1 B10, P10, B12 team should get the benefit of the doubt vs. an 11-1 ACC or SEC in nearly all situations. Unfortunately, the college football committee has not caught on to this as the ACC and SEC are the only conferences to never be left out of the CFP, despite playing a less challenging schedule.

I clearly stand behind the experts on the committee then your analyzing ways. I am sure the committee sees & knows all & makes the best judgement. There is a reason why Clemson & Bama make the CFP year in & year out. Less challenging schedule you say, just because the BIG plays 9 conference games does not make them any stronger, some of these FCS teams are better then some weaker teams in the conferences. Of course that is just in my mind I guess.

And winning in the post season, too. I mean, you can’t fake the SEC’s bowl record, nor explain why the Big Ten does so poorly with your standard. The fact is, if the Big Ten were actually better, they’d be winning more bowls.

Clemson plays South Carolina and at Texas A&M. Add in FSU and that is not a easy schedule . Read

You know the big ten hasn’t scored any points in the playoff since 2014 right?

USF has been an annual FCS beater-upper, but it’s gonna get away from that henceforth (opens at home vs. Elon).

Why are there so many Big 10 teams on this list? I really want to compliment them and I like the trend of not playing FCS teams. About half of those 22 teams are Big 10.

Because the Big Ten banned their teams from playing FCS schools. They just recently relaxed the rule and now teams with only 4 B1G home games can schedule FCS teams (basically they can now play FCS teams every other season).

Instead of demanding others lose their jobs, perhaps you should pump the breaks and learn to read and digest the context of an article before commenting. Also since you love to type in all caps here is a fact I checked… SCHIANO CAN’T COORDINATE AGAINST A HAWKEYE OFFENSE!