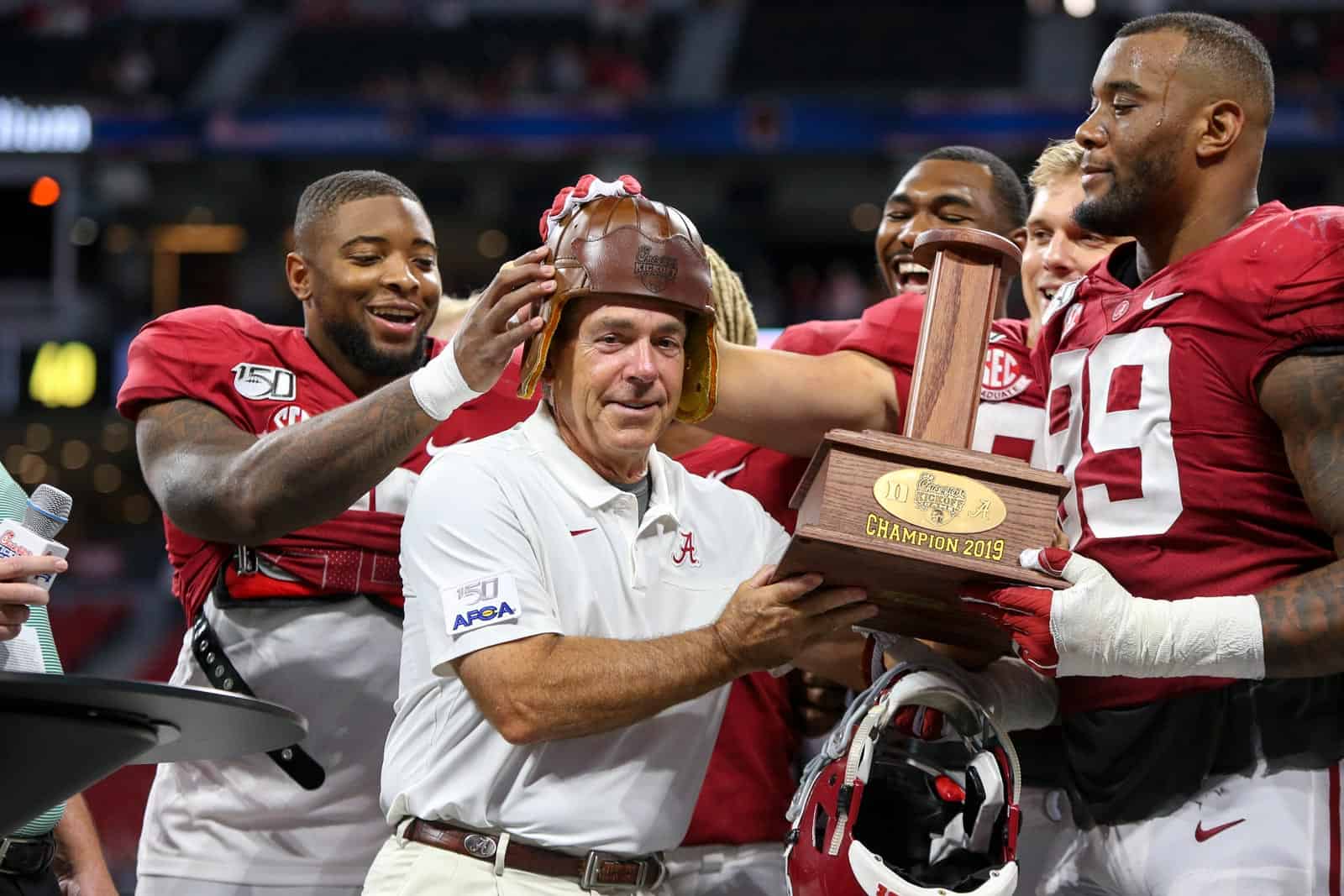 Welcome to Week 1 of 2021 SEC Football Predictions! There are a few games that are really huge this weekend.

There are a few that aren’t. Who cares? College football is back. If it’s okay with y’all, I’d like to go ahead and get in to these 2021 SEC Football Predictions for week one.

New head coach Josh Heupel should lead the Volunteers to an easy opening day win in this one.
PREDICTION: Tennessee 41, Bowling Green 13

If this game were in 2019, I’d pick Rice. The year, however, is 2021, so I’m taking Arkansas. I like what the Razorbacks have going with second-year head coach, Sam Pittman. The brass in Fayetteville like what he’s doing so much that they reset his five-year contract back to the beginning, in essence, giving him a one-year extension.

The Hogs will be an improved team in 2021 and the win over Rice will be a good start.
PREDICTION: Arkansas 42, Rice 17

Alabama is coming off yet another national championship season where it seems that 75 percent of the team and 95 percent of the coaching staff have moved on to the NFL or other opportunities.

Miami is coming off a pretty successful season in 2020, but when they played an elite team like Clemson, the Hurricanes were run out of Hard Rock Stadium.

The fact that D’Eriq King has been a college quarterback since 2017 should give Miami a chance to keep it close. The fact that Alabama’s defense might be as dominant as ever could lead to a blowout in Mercedes-Benz Stadium.
PREDICTION: Alabama 41, Miami 9

I can’t wait to see what Mike Leach has to say after the Bulldogs win. Probably not a ton of excitement other than that during Week 1 in Starkville.
PREDICTION: Mississippi State 45, Louisiana Tech 20

Missouri is one of four teams who have won the SEC East more than once. They may not win the East in 2021, but they will be interesting to watch. The winning season begins at home on Saturday afternoon.
PREDICTION: Missouri 34, Central Michigan 6

Auburn has a few COVID-19 issues, but they shouldn’t have trouble with Akron. If they do have trouble, may God bless new Tigers head coach, Bryan Harsin.
PREDICTION: Auburn 37, Akron 13

There’s a Beamer in Columbia, South Carolina, and Gamecocks fans are excited. Whether it’s rightfully so remains to be seen, but Shane Beamer should kick off his career in Carolina with a win Saturday at Williams-Brice.
PREDICTION: South Carolina 51, Eastern Illinois 10

This could be preview of one of the College Football Playoff games in January. This is already a great rivalry and the fire only burns hotter with both teams ranked in the top five. Georgia is bringing back a talented team on both sides of the ball.

Kirby Smart’s biggest challenge may be keeping the players and fans grounded for potentially 14 more games after getting his biggest win outside of Pasadena since he became Top Dawg in 2016.
PREDICTION: Georgia 34, Clemson 31

Florida plays the Owls of Florida Atlantic in Week 1 in what may be the Gators toughest in-state game of the season. The Gators should start the 2021 season with a win.

Jimbo Fisher said he’s “gonna kick his (Nick Saban’s) a**” this season. Maybe he meant his alma mater. If so, he can make good on that promise Saturday night at Kyle Field.
PREDICTION: Texas A&M 45, Kent State 6

Vanderbilt is playing an FCS team to open the season and it may not be a weak enough team. There are a ton of question marks coming into Clark Lea’s first season as head coach. He might be able to do some good things in Nashville, but if history is any indicator, there’s a rather low ceiling of success on West End in Nashville. Vandy will get the opening night win, but it might create a few sweaty palms inside Vanderbilt Stadium.
PREDICTION: Vanderbilt 31, ETSU 20

This has the potential to be the best game of the weekend. LSU has been through yet another upheaval following a late-August hurricane, but football will be a much-needed distraction from all the drama going on back home.

UCLA already got their feet wet last week in a dominating victory over Hawaii. Chip Kelly owns an uncharacteristically bad win-loss record (11-21) heading into his fourth season as head coach of the Bruins, but he appears to have a team in Westwood that more closely resembles a Chip Kelly program in 2021.

Unfortunately for Kelly and the Bruins, Ed Orgeron needs to make up for a few losing sins of his own after a disastrous 2020 season. Orgeron and the Tiguhs will squeak out an exciting road win inside the Rose Bowl Saturday night.
PREDICTION: LSU 41, UCLA 40

Lane Kiffin will try to score 100 points every weekend and this game is no different. The Rebels will be center stage taking on Louisville in Atlanta to cap off the long weekend of games. Nothing boosts a recruiting class like putting on a show when you’re the one and only game on the television in prime time. Expect a fun shootout with Ole Miss pulling away in the second half.
PREDICTION: Ole Miss 56, Louisville 28

So Eric, the SEC goes undefeated in Week 1. Does any team in the SEC lose a non-conference game this year? I’m gonna go out on a limb and say the SEC loses such a game this weekend, probably LA TECH over MSU although it might be Clemson over Georgia.

Florida is in the SEC ….

Thomas… I want to say I’m no homer, but dang. I do have them going 12-0. I wanted to take LA Tech, but feel Mike Leach will…. well…. yeah. You’re probably right. Ha. And Clemson-UGA is toss-up. I do like my Kentucky over Monroe pick though.

Oh. And look for Florida prediction in the next few minutes. Sorry about that.

If Kentucky plays as well as they have in practice, Kentucky should have a good year, providing no injuries. that will be a game changer for the kats or the virus hit them like last year. Let’s hope Kentucky stays healthy and safe from the virus and injuries.

Ummm, what covid issues does Auburn have? Must have missed that.