2020 Notre Dame-Navy game to be played in Ireland 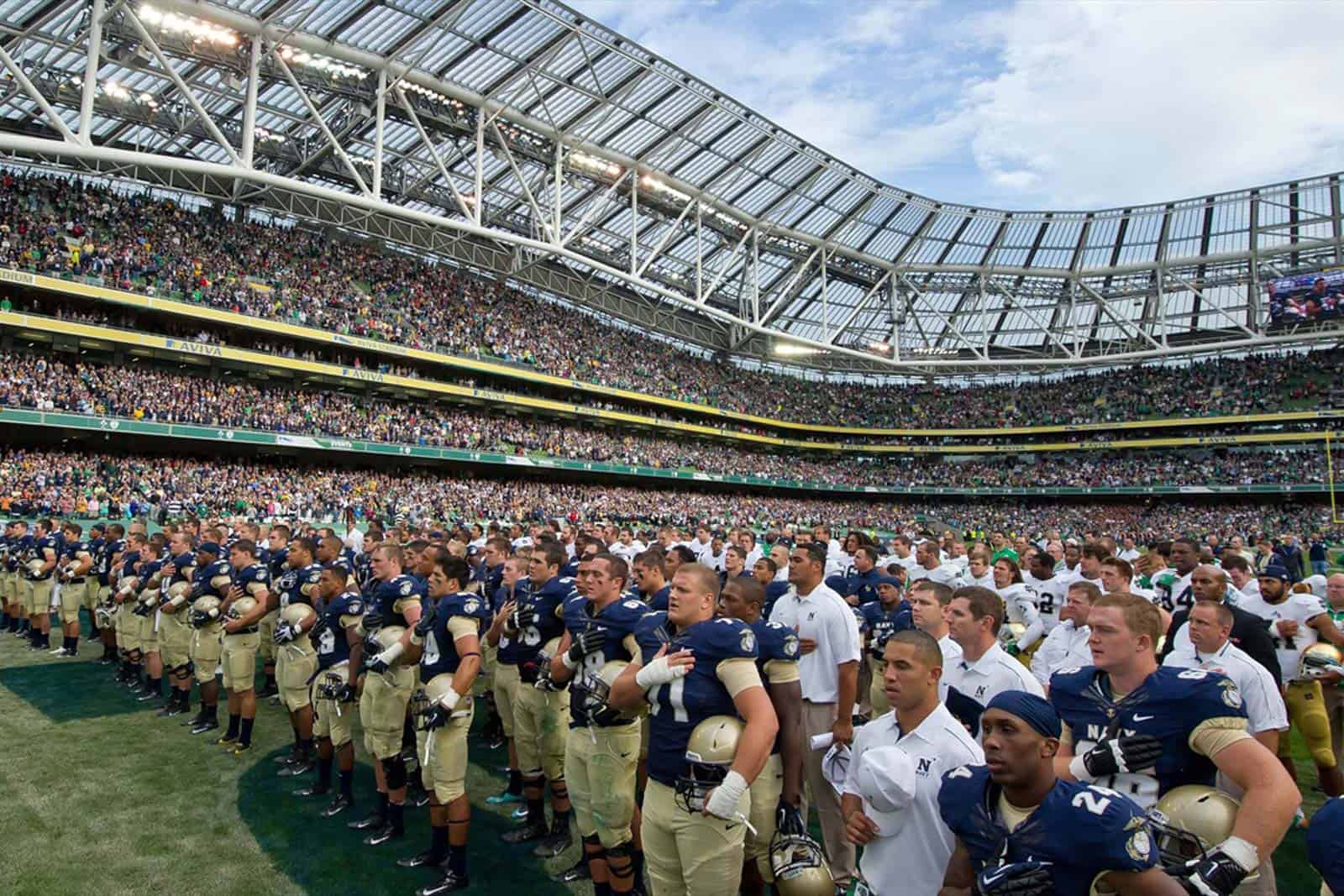 The 2020 Notre Dame at Navy football game will be played in Ireland, both schools announced on Thursday.

The game will be played in Week Zero on Saturday, Aug. 29, 2020 at Aviva Stadium in Dublin, Ireland. The game was previously scheduled to be played at MetLife Stadium in East Rutherford, New Jersey on Sept. 5.

“The University of Notre Dame, our football program, our alumni and fans had such a wonderful experience in 2012,” said University of Notre Dame Vice President and James E. Rohr Director of Athletics Jack Swarbrick. “The people of Ireland were incredibly welcoming and made our time on the Emerald Isle unforgettable. It wasn’t long after our return from that trip that Navy initiated conversations with the hopes of bringing this matchup back to Dublin. Chet and his staff at Navy deserve a ton of credit for making this a reality.

Notre Dame and Navy have met two times previously in Dublin. The Fighting Irish defeated the Midshipmen 54-27 in 1996 and 50-10 in 2012, although they would later have to vacate the 2012 victory.

“We are thrilled and excited to return to Aviva Stadium in Dublin for the 94th playing of the Navy-Notre Dame game,” said Naval Academy Director of Athletics Chet Gladchuk.  “In 2012, it was one of the greatest airlifts in all of sports with more than 35,000 people coming from the United States to witness the beauty of Ireland and the extravaganza that is Navy-Notre Dame and we expect just as many people to return in 2020.  The support and enthusiasm for the game in Ireland is magnificent with the complete support from the Prime Minister and the Irish government agencies. We are looking forward to a great matchup in a country that knows no bounds for hospitality.”

Notre Dame and Navy have met on the gridiron annually since 1927. In their last meeting in 2017 in South Bend, the Fighting Irish defeated the Midshipmen 24-17 and now lead the overall series 75-13-1.

The two schools meet this weekend at SDCCU Stadium in San Diego, California.

Confirmed with Navy that they received a waiver from the NCAA to play Notre Dame in Ireland in 2020 in Week Zero. Neither team plays at Hawaii that season.

How did they get this game in Week 0? Neither school plays Hawaii in 2020. Is it because it is outside of the US?

Confirmed with Navy that they received a waiver from the NCAA to play in Week Zero.

Navy plays army which is in the mountain west, they same conference Hawaii plays in.

Jeff: USAFA is in mountain west, not USMA.