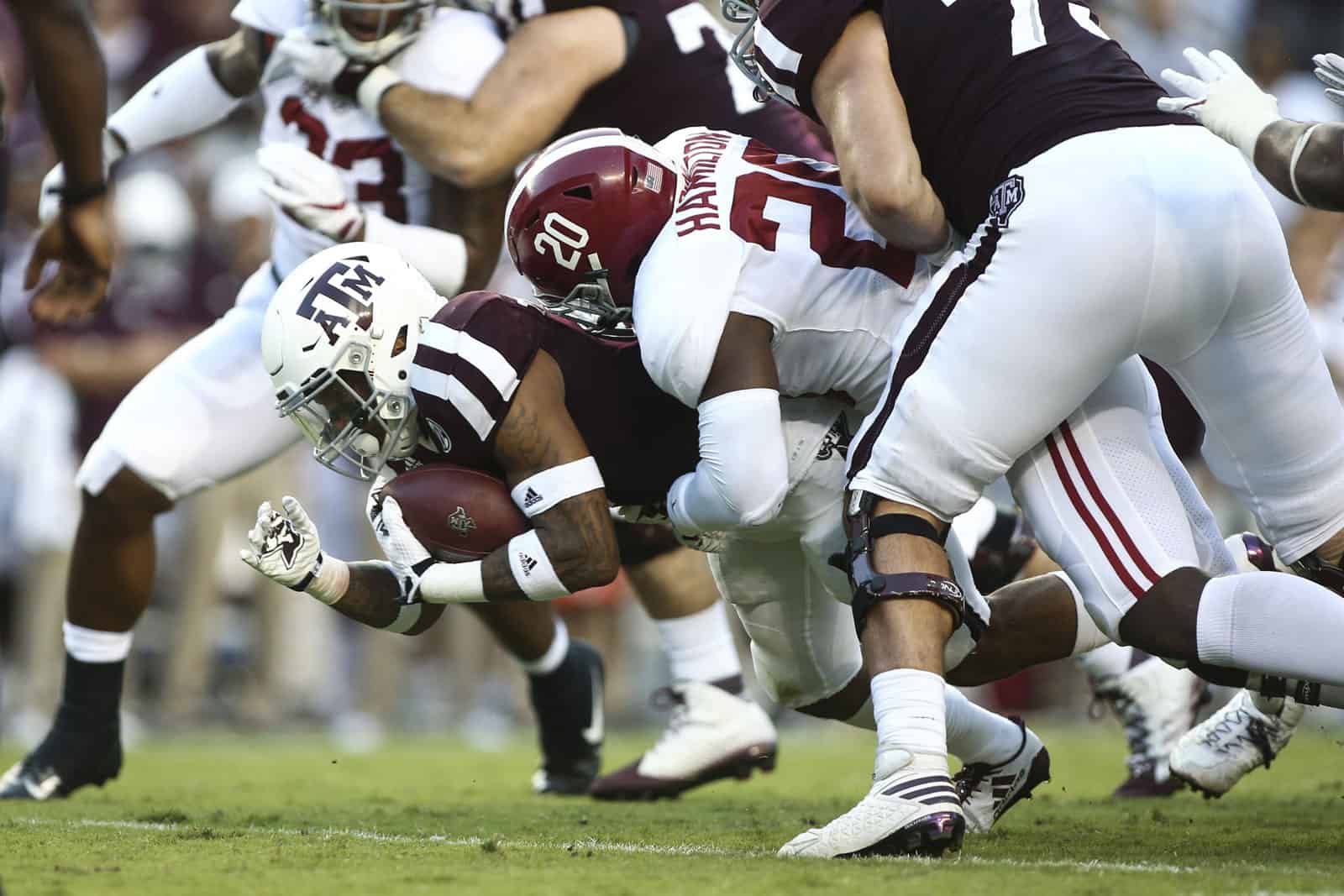 I guess last-second field goals are no longer very fun for the Auburn Family. LSU has gone from overlooked-has been to SEC contender with a No. 6 AP ranking in three short weeks. The Tigers still have games at home against Georgia and Alabama, so we will know all we need to about LSU after the first week of November.

There are a few decent games this week as we dive into the conference schedule. Please join me as we make our way to Week 4 of 2018 SEC Football Predictions.

Quick word of wisdom: It was five years ago that Missouri defeated Georgia, setting up enough momentum to carry them all the way to Atlanta. This is a very different Georgia program today under Kirby Smart. Missouri could possibly have some success early, as they did last year, but Georgia is beginning to run on all cylinders. The Bulldogs should should improve to 2-0 in the SEC even in this potential early kickoff trap game on the road.
PREDICTION: Georgia 47, Missouri 20

Quick word of wisdom: Ole Miss should be pumped for the Flashes of Kent State. Flash… another word for the Rebels offense Saturday night against Alabama. Too soon?
PREDICTION: Ole Miss 45, Kent State 31

Big game word of wisdom: What is the recurring theme of every Alabama loss under Nick Saban since 2008? Out-of-this-world quarterback play from the opposing offense. With that being the case, let’s see how Texas A&M sophomore quarterback Kellen Mond stacks up.

Kellen Mond’s 430 yards against Clemson were the second-most by a Texas A&M passer against an AP top five opponent behind Manziel’s 464 against No. 1 Alabama in 2013. Although 430 yards passing against Clemson is impressive, the fact that Mond threw for 333 of it in the second half was even more impressive. Those 333 second-half passing yards were the most by any quarterback in school history. Oh, and by the way, 206 of those second half yards came in the fourth quarter alone. That’s only 13 yards shy of the school record for fourth-quarter passing yards set by Jerrod Johnson versus Oklahoma State in 2010.

Jimbo Fisher is also utilizing something that Aggies fans may have forgotten existed… the tight end. Redshirt sophomore Kendrick Rogers literally appeared out of thin air against Clemson, scoring the first two touchdowns of his career while catching seven passes for 120 yards. Getting a tight end to sneak a few catches for first downs against Alabama could keep this game closer for a few minutes longer than expected.

Something that could mean trouble for Alabama is a game requiring Tua Tagovailoa to play more than 1.5 quarters. Tua has not only dominated thus far in the first three games of the season, but he has yet to be the exclusive quarterback for a full game in 2018. The national championship game where he only played the second half is still the longest Tagovailoa has played. We assume he can play a game that lasts four quarters, but this is a potential trouble spot (or ray of hope for the rest of the college football universe) for Alabama and it could have a double whammy.

Alabama has not faced a defense that could even be as highly regarded as mediocre in 2018. Neither has the Tide been required to play a game where the result of the next play is high stakes and pressure-filled for more than one or two series in the first quarter.

Although Ole Miss was considered a great offense before Alabama held them to seven points, the Tide defense could be in for a bigger challenge Saturday. The Alabama defense will need to stop the SEC’s leading rusher, Trayveon Williams, and if they do, the young secondary will need to continue the dominance they exhibited against Ole Miss Saturday night after the first play from scrimmage.

Even with all the fluff written above, I still think this game goes the way of the Tide. Tua will elevate his game if the Aggies defense turns the screws a little in hopes of tightening his windows of opportunity for success.
PREDICTION: Alabama 56, Texas A&M 13

Quick word of wisdom: This may be toughest game of Week 4 to predict. Vanderbilt came so close to beating Notre Dame in South Bend, but we’ve all been fooled with that narrative countless times the last three decades. South Carolina is improved under Will Muschamp, but are they really? I put my faith in the Commodores last week and they fell just a little bit short, so when in doubt, take the team playing Vandy.
PREDICTION: South Carolina 23, Vanderbilt 20 in OT

Quick word of wisdom: So much for LSU being a middling team competing for third or fourth place in the SEC West while Ed Orgeron’s backside is set afire on the coaching hot seat. The Tigers are now ranked No. 6 in the country and have a quarterback that can make enough plays without negating said plays with three dumb ones. LSU has already beaten two top-10 teams in the first three weeks of the season, so they’ve earned an “easy” win over a LA Tech team that may surprise a few folks when they keep the game close in the first half.

The Tigers still have Georgia, Alabama, and Texas A&M on the schedule, so they can’t embrace the early success if they intend on keeping pace with a very crowded SEC West.
PREDICTION: LSU 28, LA Tech 13

Quick word of wisdom: Oh, how SEC fans long for the day of Florida-Tennessee meaning so much. Referring to this game as a shadow of its former self is probably on the hyperbolic side of positive. The last time this game was played at night in Knoxville, the Vols won a back-and-forth battle on a 50-yard James Wilhoit field in 2004. This 50-yarder came just minutes after missing a 20-yard extra point.

The 2018 edition, although it’s missing the high stakes of SEC East supremacy, could be one of the most entertaining games of the early season. Both teams are pretty even on both sides of the ball and the East is not required to be on the line for the vitriol to remain thick for one another. Enjoy this one on Saturday night. Neither team will create a commemorative plate or Coca-Cola bottle celebrating the 2018 season, but this game will be remembered for a long time.
PREDICTION: Tennessee 37, Florida 35

Quick word of wisdom: Auburn led LSU 21-10 in the fourth quarter last Saturday. When the game ended, LSU was ahead, 22-21. Arkansas…. Well. Arkansas allowed a North Texas punt returner make everyone think he made a fair catch before returning it 90 yards for a touchdown. Take that crazy play away, and the Hogs only lose 37-17. To the Mean Green of North Texas.

Auburn’s anger and fury can produce more points and pain for the opposition since they have a ton of talent on both sides of the ball. We have to assume Jarrett Stidham isn’t really that human. He’s a completely different quarterback when rushed, but good grief. He will need to better the remainder of 2018 if the Tigers intend on winning the SEC West for a second consecutive season. He won’t be required to become Cam Newton incarnate this week, but a bad game against Arkansas, even in a win, could turn the season into a nightmare.

Arkansas is just figuring things out under first year coach Chad Morris. They won’t be as bad as they were against North Texas every week, but Auburn will not allow the Hogs to figure things out this week.
PREDICTION: Auburn 41, Arkansas 6

What the hell is wrong with Arkansas? It is a shame to see this program dissolve like this.
Eric, you nailed the Bama game, I am going with Bama 45-17 but would not be surprised if they put up another 50+
I will take KENTUCKY in an upset over Miss St barely & Florida over Tennessee.
Georgia boat races Mizz 44-17
Vandy over S.Carolina, BARELY!

Really? 10,579 words about Alibaba vs Atam, 1,763 words about the rest of the games. Yeah your a legit reporter if I ever know’d one. They should FAHR your ask me one question I dare ya.

Your one to talk TOM! What do you know about reporting. Erin does a fine job, leave her alone!

Tom and Walter, let’s get along. We are all on the same team… #NeverForget #911 #HaveYouForgottenBoutBinLaden