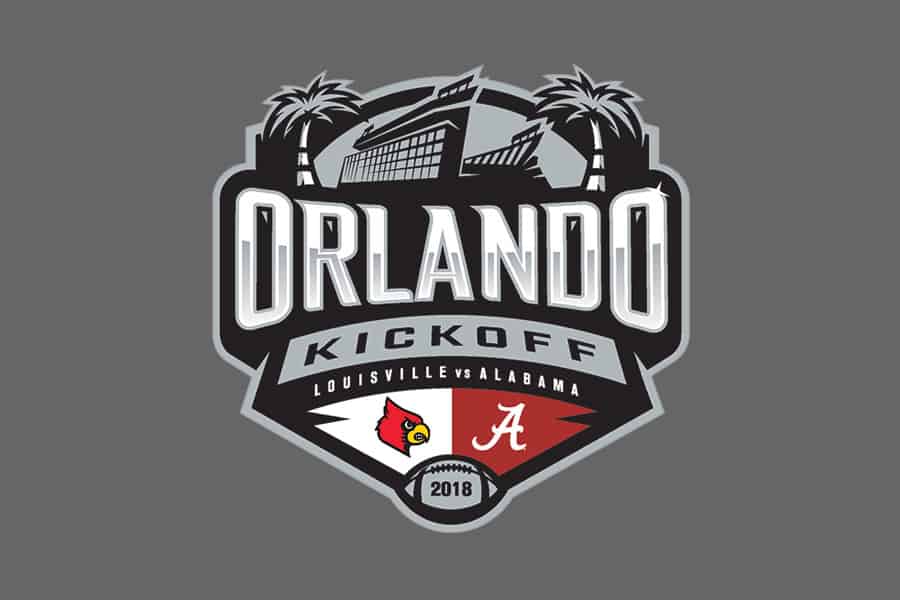 The Alabama Crimson Tide and the Louisville Cardinals will open the 2018 season in Orlando, Florida Citrus Sports and ESPN Events officially announced today.

The game was first reported last week by Brett McMurphy of ESPN.

Alabama and Louisville will meet on Saturday, Sept. 1, 2018 at Orlando Citrus Bowl Stadium in Orlando, Florida. The game will be televised to a national audience on an ESPN network.

“The 2018 game will mark the seventh consecutive neutral-site season opener for the Crimson Tide,” said Director of Athletics Bill Battle. “Neutral-site games have been good for Alabama in national exposure as well as financially under Coach Saban’s leadership. Our first regular-season neutral-site game in Orlando will provide another great matchup of national interest against an excellent Louisville program, but is also a new venue that I believe our fans will enjoy.”

Alabama and Louisville have met three times on the gridiron and the Tide lead the series 2-1. In their last meeting on Jan. 1, 1991 in the Fiesta Bowl, Louisville won 34-7.

“Kicking off the 2018 season with a great opponent like Alabama is a tremendous way to start the season,” said Louisville Athletics Director Tom Jurich. “We continually want to play highly respected opponents each year, and adding a traditional power like Alabama in the opener will certainly be an outstanding challenge. We have a vision to be the best we can be, and to do that, we have to play the best.  We are also thrilled to be headed back to a destination city like Orlando. I know our fan base will respond for this tremendous match-up.”

Alabama now has neutral-site games scheduled for the next four seasons, while Louisville has one in three of the next four.

Alabama is going after that money!! I’m sure their fans would love to see a big match ups like these at home. Instead of FCS and group 5 games. Play a home and home with a power 5 team sometime. They could actually do both in the same year! Just a thought.

Actually, they need to provide some tickets to people other than just season ticket holders. If they could expand Bryant Denny to 150,000 they could sell that out now too. Problem is, Tuscaloosa can’t handle that level of traffic at all.

SEC should invite UL & Clemson into the conference.

Oh yes, and invite FSU and TCU for the SEC-West.

Alabama would schedule H&Hs but they get pretty much a home game by playing neutral site games without having to play at Louisville (or Va Tech, Michigan, Wisconsin, etc.)

Dallas & Orlando is not considered a home game as a neutral site.

Agree, Alabama is ruining the tradition of college football scheduling with these off campus sites, it’s a joke to call them neutral sites (LOL who’s the joker that started calling them neutral?) Tuscaloosa can handle traffic better than Michigan at little Ann Arbor. Lets face it Bama is run by just a creepy bunch of administrators.

In Orlando? HAHA
So if it’s a neutral site near Bama then thats cool. Look at the so called neutral site games in Dallas or Atlanta as reference.

I’m glad this crap doesn’t happen in the NFL. Can you imagine the NFC south teams refusing to play road games in the cold up north? Carolina Panthers called the commish, they refuse to play at Chicago in November. Thats what would happen if the most the SEC athletic directors were in the NFL.

Keep hiding down south with a neutral site game, 8 home games and a bowl game all near home. We see thru it. Spare me your once every 15 year example they may travel away for a true road game. Do it every other year, thanks.

HAHA all you want to.
Magic Nick is extremely smart & knows that states like Texas, Florida & Georgia has some of the best players to recruit from. This is not the NFL so please stop comparing, 8 home games has nothing to do with anything, a bowl game near home is irrelevant, how many bowls are up north? There is a reason for that so please stop hiding behind it. I think Michigan & their fans would rather much be down in Florida for a bowl then playing in Wisconsin in a bowl. Bama is not looking to recruit in states like Michigan or Ohio so what’s the point of playing a home/n/home there. There’s nothing wrong with neutral site games, btw, every great team is playing in them, not just the SEC.

Day,
Alabama is one of the only one’s that consistently do it… The fact that almost every team but the SEC teams plays 7 home games and 5 away games can’t be taken away. It is a harder schedule because you travel to a hostile environment. No one is taking away Alabama’s greatness.

That said, you must admit that they are using (and abusing) the system to make their path to the CFP as easy as possible. No?

No, Alabama is playing according to the guide lines of the NCAA, once again, not all conferences are the same, this is not the NFL where people luv to compare the two. If you want to blame Bama for (abusing the system) then make sure you add Baylor, Iowa & a couple others to that list. As for a hostile environment is irreverent, if the Buckeyes are 4 touchdowns better then Minnesota & they are playing at Minnesota then the crowd does not matter, the Buckeyes are going to win by 4 touchdowns regardless how hostile the crowd is.

I live in Tampa. Alabama is absolutely hated in central Florida. This is brilliant on bama’s part. because it exposes them locally to young talent.. be it, Orlando (florida), dallas (texas) and atlanta (georgia) etc. Look at the hometowns on their roster.

The Ville will play anybody, anywhere, anytime, at anyplace just give us a call, either call me or Tom Jurich. LoL.

Just kidding about the me or Tom Jurich, Mr, Jurich is our Athletic Director here at the Ville. And the greatest A.D. in the country at that.

Also it will be a great honor to play the great Crimson Tide, the University of Alabama. However we are just as excited of our University of Louisville as well. It should a great match up. May the best team win.