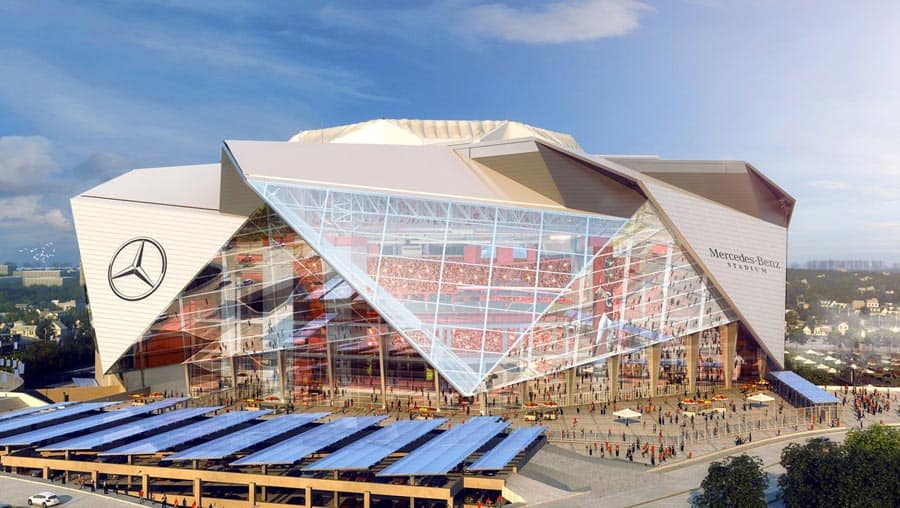 The College Football Playoff National Championship sites for 2018, 2019, and 2020 were officially announced today by the playoff organizers.

Mercedes-Benz Stadium in Atlanta, Georgia will host the College Football Playoff National Championship on Monday, January 8, 2018. The new stadium will have a capacity of 71,000 but will be expandable to 75,000.

The 2019 College Football Playoff National Championship will be played at Levi’s Stadium in Santa Clara on Monday, January 7, 2019. Raymond James has a seating capacity of 68,500 and is expandable to 75,000.

The Louisiana Superdome in New Orleans will host the CFB Playoff National Championship on Monday, January 13, 2020. The stadium has a capacity of 73,208 but is expandable to 76,468.

“It is an exciting day for the College Football Playoff,” said Bill Hancock, executive director of the CFP. “This was an extremely competitive process among the nine wonderful communities. We were pleased and honored by the time and energy that the people in all of the cities put into their bids. Atlanta, the Bay Area and New Orleans have much to offer and will welcome the participating teams and fans with warm support and exceptional facilities. We look forward to bringing college football’s showcase event to these three communities.”

This season’s Championship Game is set for Monday, Jan. 11, 2016 at University of Phoenix Stadium in Glendale, Arizona. Next year, semifinal winners will meet at on Monday, Jan. 9, 2017 at Raymond James Stadium in Tampa, Florida.

If Atlanta gets 1.5 inches of snow on that 2018 date, it should get interesting. Shut the whole city down the other year…. wonder if there’s a backup plan?

I know you’re referring to the Super Bowl, years back when an ice storm hit Atlanta. Lived there for years, not likely snow would hit in early January, but if it does, it would be a mess!

what dose that have to do with college playoffs

Talking about January 2000 in Atlanta, and ice storm hit the city the week of Super Bowl.

Will they add more than 4 teams