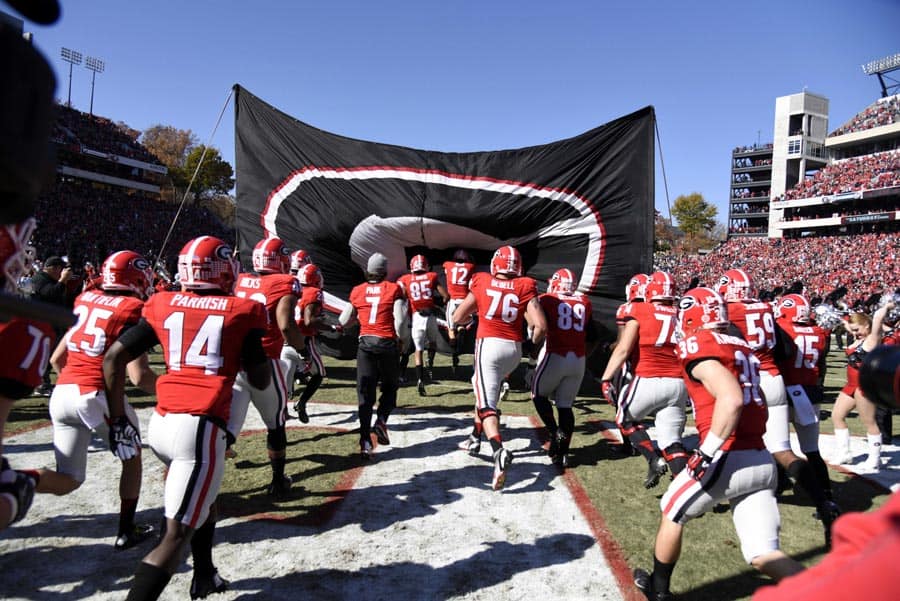 Welcome to Week 5 of SEC Football Predictions. My predictions are going very well thus far. The predictions are actually going better than my typing of the predictions. I had Florida at 2-0 last week when they were 1-1 and I completely forgot to include one prediction in Week 1. Today, I plan on bringing somewhere in the vicinity of 110 percent. That’s on me. I didn’t have my guys ready to play, but it won’t happen again. I’m the guy for this job and have what it takes to get us there. If not me, then Barry Odom.

SEC Football Predictions for Week 5 are hot and fresh out the kitchen. Momma’s rollin’ that body got every man in here wishin’… You know, that old chestnut.

Quick word of wisdom: So Vandy showed Alabama a good time in Nashville last week. The Commodores racked up 78 yards of total offense on their way to a 59-0 loss to No. 1 Alabama. It’s an odd statement to make, but a trip to the Swamp in Gainesville to take on the Gators is just what this Vanderbilt team needs. I don’t think Vandy wins on Saturday, but I know they won’t lose 59-0.

Florida found a quarterback in Luke Del Rio as he led the team back from a 13-point deficit to keep the 31-game winning streak over Kentucky alive Saturday night on the road in Lexington. Although the Gators seem to have found a quarterback, they are literally two plays away from being 0-3 and they need more than just a quarterback. They need an identity. They are not physical on either side of the ball and scare no one on offense or defense.

Expect Florida to get a late play to win this game if they even get the win. This is a noon kickoff and noon kickoffs are great for the road team when playing in an otherwise intense and potentially intimidating environment. Florida gets the win, but it won’t be impressive enough to quiet the McElwain haters in Gator Nation.
PREDICTION: Florida 23, Vanderbilt 21

Quick word of wisdom: Uh oh. Arkansas is coming off another tough loss in overtime to Texas A&M in the battle of coaching hot seats. All the pressure that Kevin Sumlin was under in College Station has shifted and/or spread to Bret Bielema’s chair in Fayetteville. The energy and atmosphere on and off the field in the Ozarks has been dull and flat.

This game has all the ingredients to feed the fire warming Bielema’s seat. The dull and flat atmosphere will more than likely be in full effect Saturday inside Razorback Stadium for an 11:00 a.m. local kickoff  against a less-than-traditional-powerhouse program, New Mexico State. Even the opposition’s nickname seems to be rubbing salt in the wound of the Hogs. The Aggies of New Mexico State will be primed to play an SEC team on the road with an opportunity to bring home a huge victory to a program that is putting up big numbers on offense so far in 2017.

The Hogs will wake up too late to make a comeback in this one and lose to the Aggies in two consecutive weeks.
PREDICTION: New Mexico State 38, Arkansas 28

Big game word of wisdom: This game may answer the question, “When will Tennessee finally just say they are done with Butch Jones?” Tennessee has been stomping on a very thin sheet of ice as of late and the program will finally fall in after Saturday’s loss at home to No. 7 Georgia.

UMass came into Knoxville last week and averaged a bloated 6.5-yards per carry on runs that were not quarterback sacks. The Vols best running back, John Kelly, averaged 4.0 yards-per-carry while the Minutemen’s best back averaged 5.4.

Although the Dawgs can’t be expected to come out on fire like they did against a hot Mississippi State team, I think a steady dose of Nick Chubb and Sony Michel will kill the Vols will to live. It will be a very frustrating afternoon inside Neyland Stadium for those clad in orange.
PREDICTION: Georgia 31, Tennessee 13

Quick word of wisdom: Kentucky can say they are moving past the heartbreaking loss to Florida, but there are people with no ties to the Wildcats program that are still reeling from that epic collapse last Saturday night in Lexington. The Wildcats were :45 seconds away, a couple yards on a missed field goal away, and a hold away on a play that would have put the ball well within kicker Austin MacGinnis’s range from beating Florida for the first time in 31 years.

Quick word of wisdom: After weeks of disdain on The Plains regarding the offense and who’s calling plays and where they’re calling them, Auburn remains ranked at No. 13 and come in to this home game against Mississippi State as a nine point favorite.

Mississippi State dropped to No. 24 after last week’s 31-3 blasting at the hands of Georgia in Athens. The Bulldogs destroyed LSU the previous week by 30 points at home, so this game will tell us whether or not Mississippi State is a September pretender. Win or lose, Mississippi State’s schedule is no pretender. The last three weeks have included a home game against LSU followed by two road games at current-No. 7 Georgia and No. 13 Auburn.

Auburn was written a prescription for “Road game against Missouri” and the medicine worked perfectly. This week will give us a glimpse into whether this was a quick fix or a long-term cure for the internal bleeding Auburn has been experiencing inside the program. Running back Kerryon Johnson scored five touchdowns in Columbia against the Tigers and Jarrett Stidham seemed to be comfortable against a terrible Missouri defense.

Quick word of wisdom: LSU slipped by Syracuse Saturday night at home and will welcome Troy to town this week to hopefully tune up the engine before heading down to Gainesville to play Florida next Saturday. Troy is not a team that will allow you to come out flat and still get the win. Although LSU has more depth that should be enough of a difference maker, this Ed Orgeron team is beginning to look a lot like an Ed Orgeron coached team. Discipline and consistency is severely lacking in Baton Rouge. A Tigers win is important this week against the Trojans from Troy, Alabama, but nowhere near as important as how LSU wins. Les certainly looks like more right now.
PREDICTION: LSU 28, Troy 19

Big game word of wisdom: Texas A&M comes into this game as a 9.5-point favorite and the thermostat has been turned down a notch or two on the seat of Kevin Sumlin’s office chair. The Aggies went to Arlington for its annual overtime game against Arkansas and won yet another one against the Hogs.

South Carolina is coming off a comeback victory against Louisiana Tech thanks to freshman kicker Parker White’s first made field goal from 31 yards out with :04 remaining. This occurred a week after being dominated by Kentucky in a home loss.

Common sense tells us that Texas A&M is heating up and South Carolina is in a tailspin. Therefore, we will take this common sense and do with it what we always do with common sense at SEC Football Predictions — throw each and every ounce of it out of the nearest window. October is within close enough proximity to strike A&M down like it does every season. South Carolina is brilliant in the role of written off team. Kevin Sumlin’s seat will be hotter than a firecracker after losing in front of the home fans and social media savvy regents.
PREDICTION: South Carolina 34, Texas A&M 28

Quick word of wisdom: Rarely will a team follow up a 59-0 win with another dominating performance, but Alabama has begun to play like a team possessed. For ‘Tide players, Ole Miss does not come into Saturday night’s late kickoff as a team decimated by NCAA investigations and coaching exoduses. This Rebels team will be viewed as the team that stormed the field in Oxford in 2014 after coming back to beat Alabama; the team that came into Tuscaloosa and never trailed in another upset of the ‘Tide; the team that lead 24-3 in Oxford last year before Alabama began a comeback late in the first half. This Ole Miss team has a quarterback in Shea Patterson that possesses a Johnny Manziel dynamic resembling the 2012 version that came to Tuscaloosa and ran circles around the Alabama defense on his way to win the game and eventually the Heisman Trophy.

Alabama is coming off of a 59-0 dominance of Vanderbilt and they will carry it over through this game with Ole Miss. Ole Miss is terrible against the run and the ‘Tide is running the ball with a ton of confidence. The Rebels rank 95th nationally against the run, giving up 184 yards a game. Alabama ran for nearly 500 yards with a stable of running backs last week in Nashville and they will do the same this weekend. Maybe they don’t get close to 500 yards, but they will run the ball until people around the country begin to ask if quarterback Jalen Hurts has an injured throwing arm/shoulder.

I will take Bama winning 32-7, more of a let down this game but not really sure what Ole Miss is going to bring to the field. There is no way NMST beats Arkansas…..lol. The Hogz are not that good but can’t see them losing to the Aggies, Bielema will win this one. I will also take A&M over USC, a close one but just think A&M is still a better team.

Eric always picks a flier it seems. He’s a Bama fan, so not all there. ;)

I don’t think the Vanderbilt-Florida game will be anywhere near as close as you’ve forecasted. I just don’t see how Vandy can recover from the humiliating 59-0 home loss against Alabama, and then immediately go to The Swamp and expect to be able to keep the game close.

Luke Del Rio will be starting at QB for the Gators, and I must say, he looked pretty darn consistent last week now that he’s healthy. He identified the protections which was what Franks was unable to do, and hit open receivers for decent gains (don’t even count the two times when the Wildcats got caught napping).

Most importantly, there are two HUGE factors in the running game to remember. Alabama ran the ball for, yes, 496 yards against Vandy last week. On Florida’s end, prior to the Kentucky game, the Wildcats gave up an average of only 58 yards rushing per game. The Gators gouged the Kentucky front seven for most of the game and ran the ball for 186 yards.

Vandy’s offensive line got absolutely manhandled by the Tide’s front seven last week, as you would expect Alabama to do to anyone. In this game against Florida, Vandy may only cross the 50 twice.

I just don’t know how in any way, shape, or form, that the Commodores can keep the game within reach. I expect the Gators to win pretty comfortably, by at least 17.