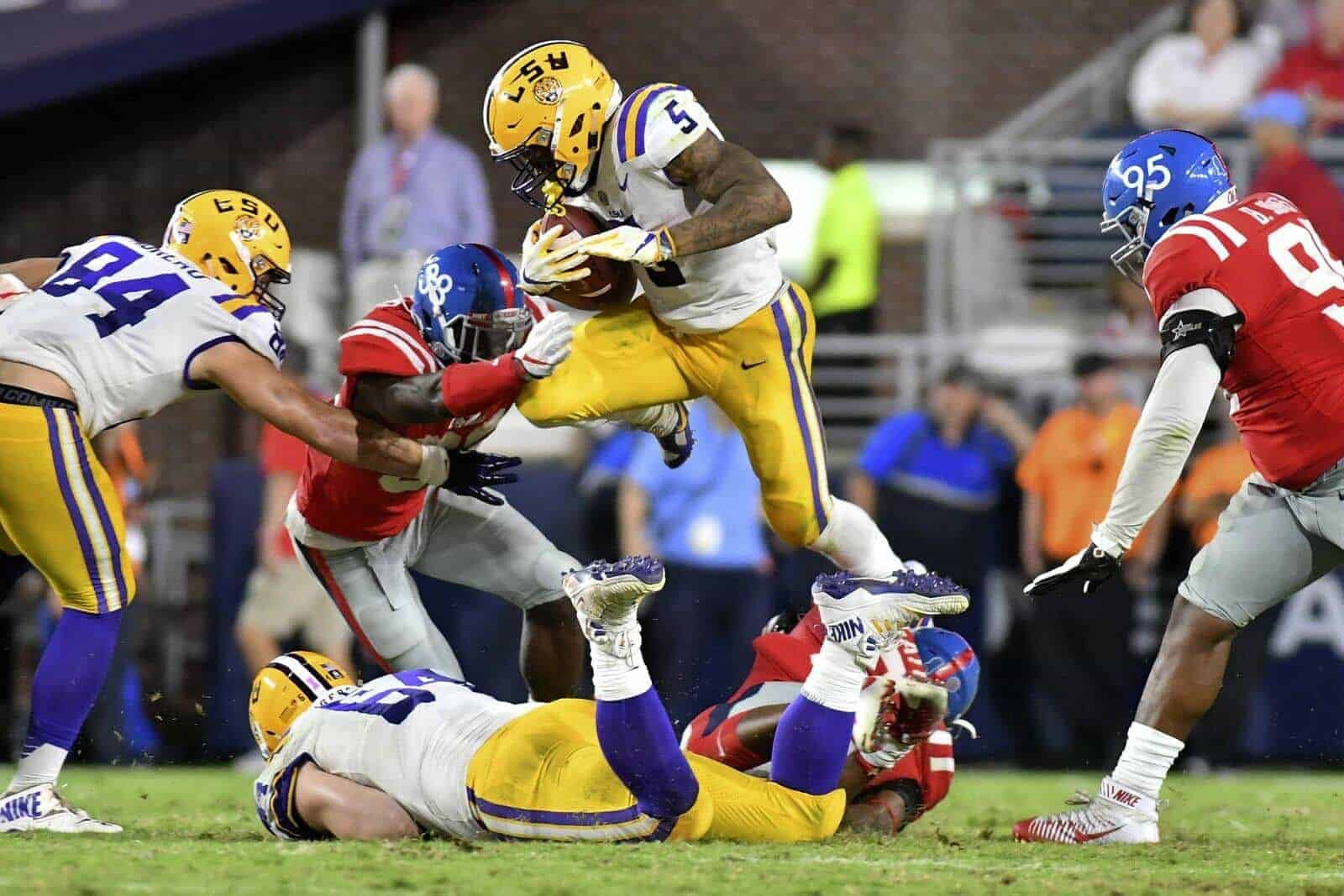 Welcome to Week 10 of 2017 SEC Football Predictions. On the 10th week of the 2017 college football season Jim McElwain was voted off the island while Kirby Smart earned immunity by leading Georgia to a No. 1 ranking in the first College Football Playoff rankings that were released on October 31st.

Week 10 could be very ugly for current Champion of Life titleholder, Butch Jones, but luckily no one in Knoxville will know it because Vols fans are getting sassy with hashtags like #EmptyNeyland.

Believe it or not, there are other big games in the SEC this week besides Southern Miss vs. Tennessee. LSU travels to Tuscaloosa for a CBS night game against No. 2 Alabama, No. 1 Georgia welcomes South Carolina, and No. 14 Auburn takes on Texas A&M in College Station in one of four games that kickoff at noon.

Let’s predict this, the 10th week of the 2017 College Football Season.

Quick word of wisdom: To say this game pits two teams that fit the Jekyll and Hyde description would be an understatement. Both Auburn and A&M — along with their head coaches — have been written off, built back up as the darling team in the West to challenge Alabama this year or in the near future, and thrown back in the mud as teams not worthy of life.

Now, they face each other for an 11 a.m. local kickoff in College Station to determine which team gets the temporary reprieve from fans. If Las Vegas is any indicator, those who put their money where their mouths are have little confidence in Texas A&M. Auburn is a 15-point road favorite as of Thursday morning. Those type of odds seem to hint that Vegas knows something we don’t. I wanted to pick the Aggies, but after Mississippi State destroyed my declaration of love for A&M quarterback Kellen Mond I think I’ll go with the road team in this one.

By the way, this win will put Auburn back in the “this team could win the West” conversation.
PREDICTION: Auburn 38, Texas A&M 14

Quick word of wisdom: My prediction of Malik Zaire getting the start at quarterback was only off by nine weeks. That was in Week 1 when before Florida was beaten by Michigan and when Jim McElwain was still head coach. Randy Shannon is now the head coach and rather than lose the players during a tumultuous time in Gainesville, the program seems to have received a jolt of energy. Malik Zaire will bring enough maturity and excitement to the team and the offense to send Florida out with a win at Missouri this weekend and possibly win out to close out 2017.

I was wrong about Malik Zaire and Florida vs. Michigan in Week 1, so don’t be shocked if my Week 10 prediction is as successful.
PREDICTION: Florida 34, Missouri 21

Big game of wisdom: When someone asks, “what is a trap game?” show them the 3:30pm CBS game. This is a game that we pointed to in September as a big one for South Carolina, and had they not blown the 10-point fourth quarter lead to Texas A&M, it would be even bigger.

Georgia is playing in another stratosphere right now, so they may not be eligible to be trapped at this point. It will be important for the Bulldogs to jump on the Gamecocks early and not allow them to stick around late in the game. The longer this game stays close, the heavier the weight and burden of that No. 1 ranking becomes.
PREDICTION: Georgia 34, South Carolina 17

Quick word of wisdom: A Kentucky loss coupled with a Georgia win will give the Bulldogs their first SEC East championship since 2012. A Wildcats win over Ole Miss in Lexington will keep Kentucky’s slim and fading hopes for an SEC East title alive. I can’t predict every play, but I’m 99.8 percent sure the final play will be some form of a Hail Mary attempt by Ole Miss to end the game. It’s how all games must end in Lexington.
PREDICTION: Kentucky 31, Ole Miss 27

Quick word of wisdom: This game is getting so little attention that it was completely left off the SEC Capsule. We won’t be that rude, but this will be the last sentence about the game.
PREDICTION: Arkansas 45, Coastal Carolina 7

Big game word of wisdom: All this “Hey, Pawwwwwwl… You think Alabama AND Georgia will get in the College Footbaw Playoff?” talk could quickly turn to “Pawwwwwwl…. Do you think they’ll let a two-loss LSU team in the playoff even though they lost to Troy?”

It will take a huge game from LSU to cause these End Times, but it just goes to show you how small of gap there is between “Best team ever” and “Season over.” Alabama could and should win this game and go on to win out on their way to Atlanta. They could also lose this one game and Georgia could lose to Auburn in a few weeks, setting up an SEC Championship Game between a hot two-loss LSU and a blemished Georgia. A lot has to happen for this to come true, but we’ve seen much crazier events occur.

Remember that time Alabama beat Clemson for Nick Saban’s fourth national championship at Alabama in 2015? That would have never been possible if not for a fourth down one-armed backwards lateral made by an Arkansas tight end that bounced twice and landed in the arms of a running back who ran the ball for a first down in overtime against Ole Miss. That first down led to a touchdown and a two-point conversion, giving the Rebels two conference losses. If Ole Miss makes the tackle or the ball bounces a different direction, the Rebels go to their first SEC Championship Game. Sure, Alabama was great that season, but that one play by Arkansas was the difference between Alabama being a really good team rather than a historically great national championship team in 2015.

As far as the actual game that takes place Saturday night, I think Alabama’s run game and ability to stop the run will be the difference. If Matt Canada can get a big play or two on the ground with some misdirection, then LSU has a better chance of getting Alabama on its heels a little bit on defense.

Nick Saban defenses have been great in the past for obvious reasons like speed, agility, and strength, but the most underrated reason Alabama’s defense is so dominant is the NFL-like adjustments that are made in-game. A play may be successful once against the ‘Tide defense and it might work again to a lesser degree a second time, but an opposing offense will not run the same play successfully three times in a game… unless said team has a dynamic quarterback that can pick Alabama’s defense apart, run for first downs, and make every throw to any part of the field.

Senior quarterback Danny Etling has been somewhat proficient for LSU in 2017 (9 touchdowns, 1 interception), but he’s not scaring anyone enough to force a defense not to bring everyone in the box to focus on running back Derrius Guice. Guice is a talented back with breakaway speed and punishing power. The question to answer on Saturday night will be how much punishment can he take before it’s not worth damaging his body? If he’s averaging four yards per carry, then LSU’s coaching staff will do cartwheels and hope for the best as they hand him the ball on first, second, and third down. If he’s averaging one yard per carry, decisions will need to be made for his post-LSU future.

Alabama won in 2016 by a score of 10-0. The score was 0-0 for much of the game, resembling the 2011 Game of the Century. Can LSU’s defense be as effective as they were last year in Baton Rouge? We will need to see exponential improvement from the run defense if the Tigers hope to leave Tuscaloosa with any semblance of a win. Otherwise, the ‘Tide will give Jalen Hurts’ arm a night off. The legs of Hurts, Damien Harris, Bo Scarbrough, Josh Jacobs, and Najee Harris should be enough for Alabama run up chunks of yards on the ground and eat up chunks of time off the clock in a convincing win over LSU.
PREDICTION: Alabama 34, LSU 13

Quick word of wisdom: Tennessee is playing with a lame duck coach and a fan base slinging hashtags around Twitter to get other fans to boycott the homecoming game at Neyland Stadium. Seems pretty counter-intuitive since Butch Jones is all but gone as head coach. Much of the pressure to allow him to finish out the season seems to be coming from Philip Fulmer.

Despite all the above referenced negativity, the Vols players have been playing hard. They aren’t playing that well, but they are playing hard and have not given up. Effort will pay off with a win in games like this one against Southern Miss. Effort alone won’t beat an Alabama, or even Kentucky this year, but it will beat Southern Miss this week in a close one.
PREDICTION: Tennessee 37, Southern Mississippi 31