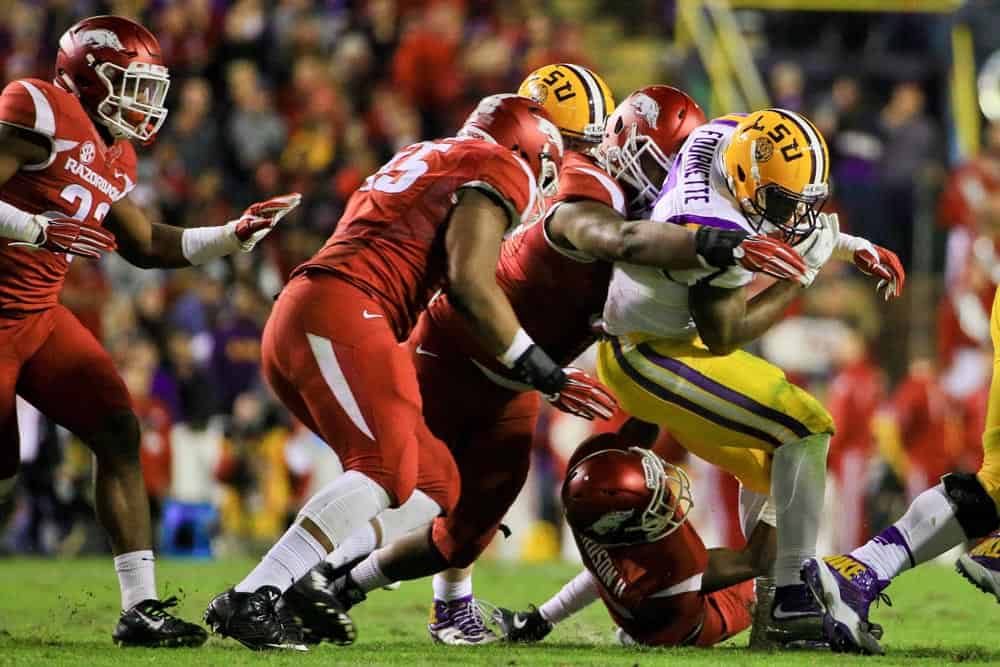 Welcome to the Week 11 edition of SEC Football Predictions. I will refrain from the “Can you believe it’s already Week 11?” because it will be mentioned more than once elsewhere. But seriously, didn’t we just start the season? Hard to believe. Can you believe we are sitting here in Week 11 with only three weeks remaining in the season? Yeah, me neither.

With that being said, let’s get to Week 11 of the 2016 SEC Football Predictions before we look up and it’s already Christmas. It’ll be here before you know it. Am I right?

Quick word of wisdom: Just when we thought we had everything figured out, Texas A&M went Texas A&M and lost a game in November after being highly ranked. The Aggies have now lost two out of the their last three games, taking them from contenders in the SEC West and College Football Playoff (No. 4 ranking when losing to MSU) to late-season pretenders once again. The culprit for this season’s big disappointing loss is this week’s opponent for No. 1 Alabama.

Can Nick Fitzgerald do to Alabama what Danny Etling could not, which is pose any threat whatsoever to the Tide’s stifling defense? Fitzgerald has the makeup to be that type of dynamic quarterback that can throw Alabama’s defense off just enough to give them a puncher’s chance.

The X-factor will be the time the game kicks off. Nick Saban almost always has Alabama ready to play no matter what time the game is scheduled to kick off, but this week’s game has to scare him a little bit. Fitzgerald is good enough to burn a team that expects to sleepwalk their way to victory. Ask Texas A&M.

Alabama is coming off a huge 10-0 win over LSU in Baton Rouge in prime time and is two weeks away from what is setting up to be a game for all the marbles in the West against Auburn. This team is accustomed to games under the big lights of prime time or the creeping shadows of the late afternoon 3:30pm Eastern CBS game of the week.

After four paragraphs of “maybe they can do it” talk, I still think Alabama will be too much for the sleepless in Starkville Dan Mullen and the Bulldogs.
PREDICTION: Alabama 30, Mississippi State 7

Big game word of wisdom: In the second of three Noon kickoffs this week, South Carolina and Florida will play in a game that could muddle up the East beyond recognition. South Carolina is the hotter and much more confident of the two teams entering the game at The Swamp on Saturday at noon. The Gators will be without quarterback Luke Del Rio once again and will be forced to go with redshirt senior Austin Appleby.

A Gamecocks win will give the Gators three conference losses, which will put Tennessee right back in the driver’s seat… if they can win at Kentucky at the exact same time this game is going on.

Get ready, Vols fans. It about to get real in Knoxville.
PREDICTION: South Carolina 21, Florida 13

Quick word of wisdom: If there is a team that does not match up well with Tennessee no matter how good or bad each team is perceived to be, it is the Kentucky Wildcats. Kentucky comes in as a 14-point underdog and after last week’s collapse against Georgia in Lexington I would not be surprised if Tennessee blows right through that point spread. Then again, Tennessee should have defeated South Carolina two weeks ago.

The silver, or orange, lining for the Vols is that they had a large distraction removed from the team two weeks ago when Jalen Hurd announced he was leaving the university. Whether he was right or the coaching staff was correct matters little. The team chemistry had become toxic and acidic, so Tennessee should be able to play for the first time this week without trying to walk on eggshells.

With the likelihood of Florida losing at least one game over the next two weeks, the Vols could and should be playing for a repaved road to Atlanta that appeared to be closed following the loss to South Carolina.
PREDICTION: Tennessee 44, Kentucky 13

Biggish game word of wisdom: Here goes Auburn getting good again at the right time of year. Georgia is limping through year one of the Kirby Smart era. The Bulldogs aren’t overly successful this season, but it has not been a complete failure either.

The near-.500 record is a great representation of how mediocre and average the season has been. No one expected an SEC Championship, so 2016 going as expected has caused many UGA fans to just want to get season one over with in order to get to year two for both Smart and freshman quarterback Jacob Eason.

If Georgia does pull out a victory over Auburn, it would not be the first time a not-as-good Georgia team defeats a we-thought-they-were-better Auburn team. It almost happened in 2013, but that was the beginning of the Malzahn Miracles of ’13.

Auburn has the defense and the run game going too well to lose to Georgia this season.
PREDICTION: Auburn 31, Georgia 17

Quick word of wisdom: Missouri is favored to win by 3.5 points. I don’t think they will. I think Vandy will win.

That is about all we can say about this game at this time.
PREDICTION: Vanderbilt 17, Missouri 10

Quick word of wisdom: LSU is coming off its annual loss to Alabama while Arkansas woke up and manhandled Florida following a blowout loss to Auburn.

LSU appears to enjoy using the same road map as Texas A&M. The season starts out strong, then a loss to Alabama, followed by a huge letdown for nearly the entire month of November.

Although LSU is favored by seven, I’m taking history in this one. Arkansas has always matched up well with LSU and they will match up just fine on Saturday for the win.
PREDICTION: Arkansas 31, LSU 21

Quick word of wisdom: Texas A&M was favored by three touchdowns over Mississippi State and lost in a trip to Starkville, Mississippi. The Aggies are favored by 10.5 points to another team from the state of Mississippi, but at least this game versus Ole Miss will be in College Station.

The Rebels and Aggies both will be playing without their starting quarterbacks, so this game will be a fun preview for the fan bases of each team to get a glimpse of the 2017 offense.
PREDICTION: Texas A&M 30, Ole Miss 24 OT

I’ll take Bama 38-10 over Miss St, if S.Carolina beats Florida then the SEC east is really in term-oil. I think Auburn will win but will be pulling for the Dawgs.

Not saying UT won’t blow out UK, but saying they don’t match up well is completely ludicrous. UT giving up 200 rush yards per game and UK top 5 in the SEC in rushing. That alone will help UK control clock and the game.

Term-Oil. You, sir, have the the most appropriate screen name on the internet because your mastery of the English language has made my day. I do not know your alma mater but I can tell from here that it is the epitome of regional education. I thank you, sir, with full sincerity, for your insightful comment.

No problem, turmoil, is that better? Glad I could make you laugh or at least respond to a comment.

You correctly predicted #1, Alabama would beat a 5 loss Mississippi state team; &, then got everything else wrong. Keep up the good work!