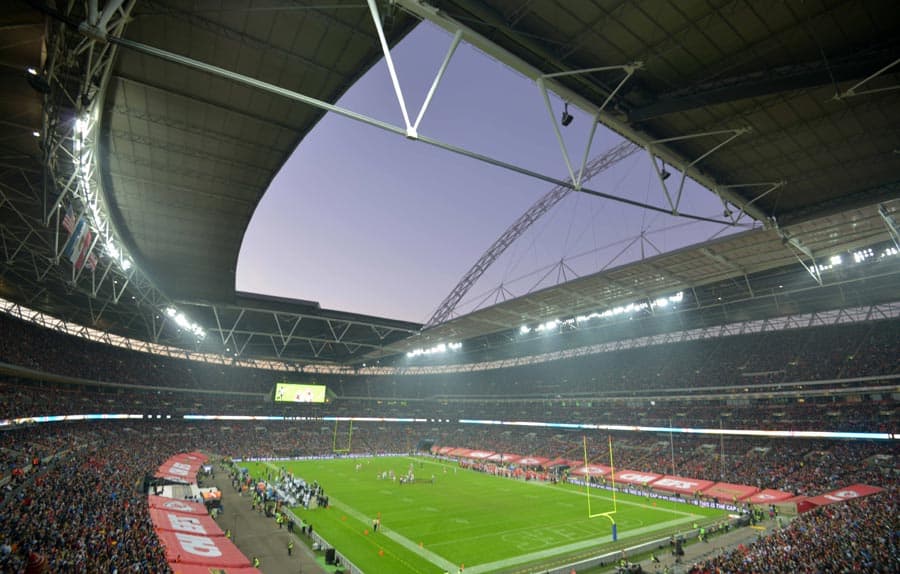 The NFL has announced the 2016 International Series games that will be played at Wembley Stadium in London.

The Jacksonville Jaguars will host the Indianapolis Colts on Sunday, Oct. 2 (Week 4). The game will be played at Wembley Stadium.

In Week 7 on Sunday, Oct. 23, the St. Louis Rams will host the NFC East team that finishes in the same spot in the standings as the Rams do in the NFC West (Update: St. Louis will play the New York Giants). That game will be played at Twickenham Stadium.

The third and final 2016 International Series game will be played on Sunday, Oct. 30 (Week 8) at Wembley Stadium. The Cincinnati Bengals will play host to the Washington Redskins.

Kickoff times and television coverage for the 2016 International Series will be announced at a later date.

Jacksonville will be playing in their fourth consecutive game in London and have agreed to play there through 2020. The Jaguars opponent, Indianapolis, will be making their first appearance.

St. Louis will be playing in their second International Series game. The Rams previously played New England in London in 2012.

Cincinnati will play in the International Series for the first time in franchise history. The Bengals face off against Washington, who as previously mentioned, could be playing their second consecutive game of the season in London.

“The passion our UK fans have shown for the NFL is overwhelming,” said NFL Commissioner Roger Goodell.  “We are very appreciative of the strong and growing fan support, not only for the games, but for all of the related NFL events we host in the UK throughout the year.  We look forward to welcoming new fans to their first NFL game in 2016 and welcoming back thousands of others that are helping our sport grow to new levels of popularity in London and beyond.”

A fourth game, Houston at Oakland, is also part of the NFL International Series in 2016, but will be played at Estadio Azteca in Mexico City, Mexico. The game is set for Monday night, November 21, 2016 (ESPN/Televisa).

Agree. Although I guess I can live with this setup versus permanently having a team in London.

Give them preseason games. No reason they need to have regular season games esp in the middle of the season. Stop the madness

As long as they keep the early (USA) kickoff to allow for 4 Sunday time windows I say do it every week.

They’re absolutely going to do that, to maximize TV viewership. In fact, I wouldn’t be surprised if the NFL goes to Tokyo for that very reason.

In the history of this series, how many teams have never played in England and had to put up with this travel? Why would any team agree to this unless they don’t have a good home situation?

Read the article, 2016 is the last year. You don’t have to worry anymore about not having your beloved tailgate party.

It doesn’t inconvenience me at all.

If the NFL really wants these international games then they need to go to a 17 game schedule. Each team plays 8 home games and 8 road games and 1 International game. That gives them 16 games league wide that they can put in cities around the world and US fans don’t have to sacrifice a home game. Then they don’t have to mess with trying to figure out travel associated with relocating a team abroad. All 16 International games wouldn’t even necessarily have to be overseas. The NFL could return to Toronto again and test the waters in Vancouver. Heck, an “International Game” could even be played in the states in a city that doesn’t have NFL–like having the Browns or Bengals playing in Columbus.

I’mvery much AGAINST our football in EuropeThese oyr OUR TEAMS teans!! I watch games all day long– but not ones thst go to Europe. WHY the need? STUPID

Why not ship some of the preseason games overseas? The fans over there will still get the “NFL experience” without home town fans of the nominal “home team” having to sacrifice a regular season game.

they struggle to sellout regular season games….like the usa no one is going to pay the prices they charge to see preseason games……

Can you imagine the Eagles with Chip Kelly invading London?

surely you dont pay the same price??? you meant o tell me as a season ticket holder if your team gives up a home game the price stays the same!?!?! i find that hard to believe

I think season tix holders do get a break and don’t pay for the London game. But, many of these US stadiums are taxpayer built and/or supported. There are only 8 regular season dates as it is. Games should stay in the US city. If Roger the Evil is so committed to the NFL in London, then he should browbeat and intimidate the Jags to move. He’s good at that. (Best thought: make the Raiders relocate there!)

They should make the London Sillynannies

not a big fan of playing these games, but at the sametime it was the best thing to happen to the Kansas City Chiefs. Allowed the team to come together and bond. Worked out well the rest of the regular season.