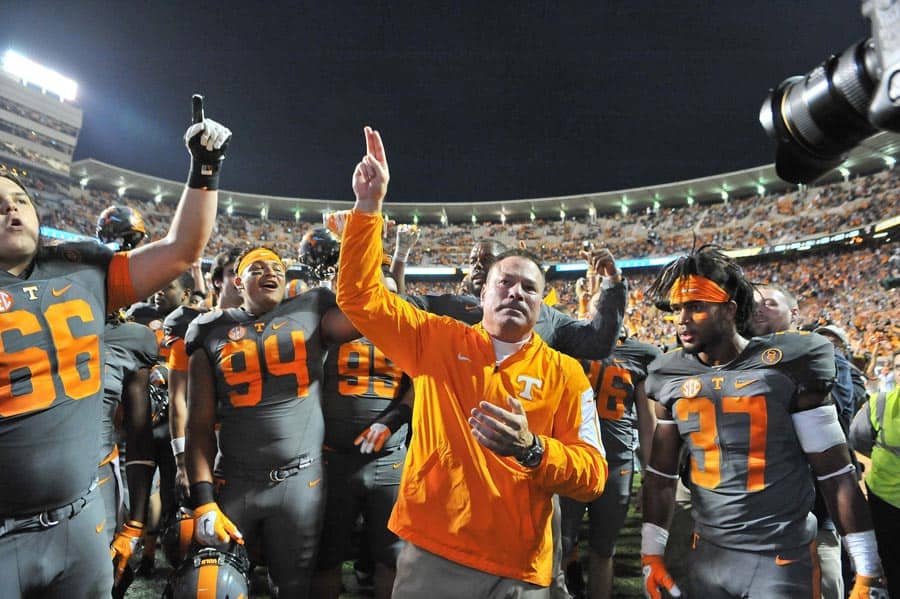 Welcome back to SEC Football Predictions. We are coming off the worst week of predictions since that church said the world was ending in 2011. None of that matters now because it’s a big week for a certain group of fans in Tennessee and Alabama. Even yours truly has a special passion for the Alabama-Tennessee game.

We can all pretend to be unbiased and balanced, but if it wasn’t for great rivalries that caused my blood to boil as a kid and even now, I wouldn’t be inclined to write about a sport played by kids that were three years old when I was graduating high school. Read this piece I wrote three years ago about moving to Tennessee from Alabama as a kid and life as an Alabama fan in Big Orange Country. If you aren’t an Alabama or Tennessee fan, substitute your fandom experience and relive what made you the fan you are today.

College football is the greatest game on earth. Let’s celebrate that fact every chance we get. Especially these sacred few Autumn Saturdays we get each year.

Enough preaching from me. We can move on to Week 8’s SEC Football Predictions or we can keep watching the Cubs do what they do in October. You’re the guest, so you decide. I’ll be working on trying not to mess the bed with these picks while you make up your mind.

Quick word of wisdom: This game should have much more on the line than “Salvage The Season” status, but Auburn has been bad and Arkansas has been dull. No one believes either of these teams will finish as slow as they have started, but a loss today will slow down any hopeful momentum heading into the backstretch of the 2015 SEC Football season.

Auburn is coming off a win at Kentucky and the game appears to be slowing down for freshman quarterback Sean White. Auburn will run for more yards than the Hogs and get the early Saturday win.
PREDICTION: Auburn 20, Arkansas 14

Big game word of wisdom: Yes, Alabama is a 15.5 favorite, but this is arguably the best Tennessee team to face the Tide since Lane Kiffin was a Terrence Cody blocked field goal away from upsetting Alabama in their 2009 undefeated national championship season. If the Vols can somehow upset Alabama this weekend, they will be alive in the SEC East, but will simultaneously be kicking themselves for the Florida and Arkansas losses.

To say Tennessee is a long-shot is fair, but it’s not completely accurate when looking at the schedule. The Vols are coming off a much-needed bye after a huge win over Georgia in Knoxville. Alabama is coming off road games at Georgia and Texas A&M with a home win over Arkansas sandwiched between the two wins.

Alabama has not been very stellar at Bryant-Denny Stadium. A loss to Ole Miss is proving to be much more confusing as the season grows older and the win over Arkansas was far from impressive. This game still means something in Tuscaloosa so Bama should come out fired up and ready to play, but don’t expect the dominating performances we’ve witnessed four of the last five meetings. Alabama wins the final score by a large margin, but quarterback Joshua Dobbs and running back Jalen Hurd’s tough play keep this one respectable for three quarters.

Next year could be the first year we see Alabama-Tennessee in Atlanta. This year, the Vols will be forced to be on the wrong side of another streak in a rivalry.
PREDICTION: Alabama 33, Tennessee 13

Quick word of wisdom: We overshot the total points score in the Missouri-Georgia game by nine points and we predicted a 14-10 Missouri win. The predicted score of this tilt in Nashville may be overselling the offenses of these two teams as well.
PREDICTION: Missouri 6, Vanderbilt 3

Big(ish) game word of wisdom: One of these teams beat Alabama in Tuscaloosa and the other just got destroyed at home versus the Tide. At this point in the season, it’s up for debate as to who ended up with the worse deal between the two results.

Each of these two teams were ranked in the Top Ten at the end of September, but Ole Miss was barely the second best team at the Liberty Bowl in last week’s loss to hot Memphis. Texas A&M has yet to play a game outside the state of Texas, but friendly fire from the Ole Miss faithful may prove to be more beneficial to the Aggies.
PREDICTION: Texas A&M 38, Ole Miss 21

Quick word of wisdom: This Western Kentucky team has already scored over 300 points on the season and averages 400 yards passing per game. It’s not a game LSU can take lightly, but on that same note, WKU can’t pretend this is a road game at Indiana or LA Tech.

If Western Kentucky’s firepower can keep up on offense, we could see Leonard Fournette run for 300 yards if he’s forced to stay in the game to help the Tigers pull away.
PREDICTION: LSU 42, WKU 20

Quick word of wisdom: Mississippi State is about to embark on a huge close of October and November. It all starts at home against Kentucky on Saturday night. We’ll keep tempering everyone’s predictions for the SEC West with a disclaimer that Mississippi State will be in full attack mode by the time Alabama makes its way to Starkville in November. The Bulldogs could ruin many an opposing fan’s season as we make our way down the home stretch. Watch this score carefully as you finish up your night of football and see Dak Prescott and the gang can get the momentum rolling.
PREDICTION: Mississippi State 41, Kentucky 21

I will go with a bounce back game for Ole Miss & say they win. Also would like to see if Mizz can score more then 10 points in a game.

Nah, we forget Bama turned the ball over five or so times in the game with Ole Miss. Bama wouldn’t be doing that today, futzing around with the quarterback decision. They’d have Coker in there, and there’d be only one turnover. Then Ole Miss would have lost by 28+. A&M will not lose again.

old miss is finished. wku lights it up in a shootout. tenn gets crushed. kentuc pulls upset. vandy does it with offense. ark blows up auburn.

James Dobson? The guy from Focus on the Family is Tennessee’s quarterback?

no his name is josh dobbs

I think Arkansas beats Auburn, but other than that I agree with all the predictions.

As an Auburn grad, I hate to agree with you… but there’s no way AU pulls it off on the road in Arkansas. The defense is so porous. Arkansas will control the clock, and there won’t be enough time for AU’s offense to do much more than score two touchdowns.

A&M wins over the beat-up Rebels!

It has been corrected. I was tempted not to change it. I’d love to see what Dobson could under center.

vols hopefully will win over bama. Bama not a power in sec. Lsu is in sec. Gators suck 4ever

Bama almost lost to Vols. Not much of a power house from my end.

There are 2-3 games Bama could lose a year, you could say that about any top team from any conference, does that not make them a power house within their conference?