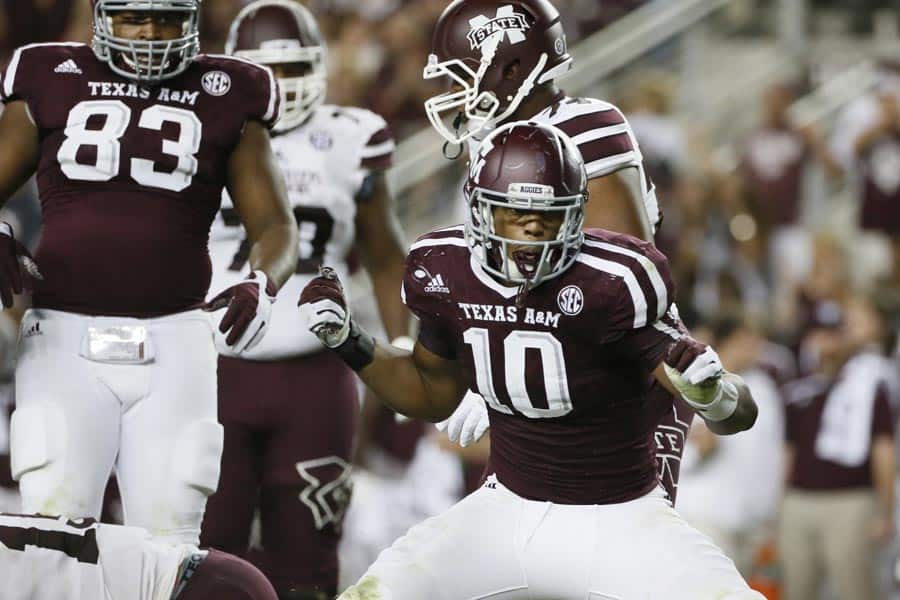 Welcome back to SEC Football Predictions. Off-the-field stories usually get the most run during the off-season, but heading into a fantastic Week 7 featuring two top-ten matchups we were slapped in the face with the news of one of the top five SEC football coaches in the history of the sport had retired.

Oh, and Florida’s freshman quarterback, Will Grier, who has led the Gators to an undefeated record and No. 8 ranking heading into Saturday night’s game in Baton Rouge, has been suspended for a full calendar year for testing positive for PED’s.

At least this happened to the Gators on the week they play in a place where the team loses at night about as often all-time great coaches retire in the middle of the season. That’s a fancy way of saying, it happens very sparingly, but it happens.

The editors are giving me a dirty look so I better get to SEC Football Predictions for Week 7 quickly. We have Thursday football in the “ESS-E-SEE” this week.

Quick word of wisdom: Please don’t try to contact the great people at FBSchedules to advise the records of the two teams above are transposed. I’m going to need you to trust us on this one. The records are correct. Auburn is favored by two points, but Kentucky is playing pretty good football and Auburn is, well, playing football.

This next sentence is not a misprint either: Depending on what happens in Baton Rouge between Florida and LSU, Kentucky could be in a tie with Florida for first place in the SEC East if the Wildcats can get the win over the struggling Tigers at home in this Thursday night primetime game. Yes, Florida would hold the head-to-head tiebreaker over Kentucky, but the words “Kentucky,” football,” and “SEC Championship Game in Atlanta” can legitimately be found in the same sentence.

Kentucky finds a way to stay on the road to Atlanta and Auburn continues to go off the rails. Something is wrong on The Plains and this game only adds gas to the fire.
PREDICTION: Kentucky 21, Auburn 13

Quick word of wisdom: Okay, I’m trying to be patient, but please stop calling the FBSchedules home office complaining about getting the records wrong. Just like the Kentucky and Auburn game above, the records in this one are also correct. Wait, there’s no way Memphis is… okay, never mind. That is correct. So, who wins this one?

Memphis will put up a fight, but Ole Miss has too much defense up front and too much firepower in the passing game. Hotty Toddy.
PREDICTION: Ole Miss 35, Memphis 20

Quick word of wisdom: This game will not very fun to watch for anyone outside of Starkville, but beware the ides of Mullen. Mississippi State will ruin a season or two before it is all said and done. The Bulldogs beat the Bulldogs.
PREDICTION: Mississippi State 31, LA Tech 14

Big game word of wisdom: Alabama’s victory over Arkansas dropped the Crimson Tide two spots in the AP Poll to No. 10. A win against the Aggies at College Station Saturday afternoon might drop Alabama completely out of the top 25.

Only kidding, of course. This season has been about as unpredictable as any since at least 2007.

Alabama quarterback Jake Coker has played better on the road than he has at home thus far, so if the current trend is accurate, Coker should have a huge day against the Aggies Saturday at Kyle Field.

That being said, no one should expect a 59-0 beating similar to last year in Tuscaloosa. A&M has the offense to make Alabama’s defense look pedestrian, but if the front-seven for the ‘Tide can get to Kyle Allen, the secondary won’t look as weak.

Although the Aggies rank 11th in the conference in total defense, they rank second in sacks. With future NFL Hall of Famer Myles Garrett coming off the line like a rocket and spending more time in the offensive backfield than the running back, it could be a long day for offensive coordinator Lane Kiffin. Coker has shown that he can run, but he’s no Blake Sims by any stretch of the imagination. So keep an eye out for a few screens or quarterback scrambles from Coker to neutralize the pressure. Or, Alabama can hand it to the Henry kid at running back and see how that works.

By the way, A&M has yet to play a game outside of the state of Texas and won’t until they play at Ole Miss next week. That has absolutely nothing to do with this game, but it is mid-October and the Aggies haven’t played a true road game yet.

Alabama does just enough to leave A&M with a win and continue pushing through a stacked October schedule.
PREDICTION: Alabama 34, Texas A&M 28

Quick word of wisdom: Steve Spurrier retired. Is there anything else to really gather from this game? Six combined SEC losses. Zero combined SEC wins. Ugly game in an ugly season for both teams. It’ll be nice to see Columbia back to some form of normalcy after the flood ravaged the state of South Carolina.
PREDICTION: South Carolina 20, Vanderbilt 7

Big game word of wisdom: Then there’s this game to watch immediately following 3.5 hours of top-ten football drama. Florida’s quarterback is done barring some miracle appeal and we all know what happens when a team loses its star player and any hope of winning… they end up playing stronger as a team and winning.

That will be a tough story arc to follow for the Gators as they travel to Baton Rouge to play an LSU team that has only lost eight games at night in Tiger Stadium since 2000.

Sophomore quarterback Treon Harris will need to play the most inspired game of his life if Florida wants to escape Death Valley with a win on Saturday night. We’ve picked against Florida twice already this season and it burned us. We also picked them to beat Ole Miss when Ole Miss was unbeatable. Somehow, someway, the Gators leave Baton Rouge with a win and an almost guaranteed spot in Atlanta for the SEC Championship Game.
PREDICTION: Florida 24, LSU 19

Quick word of wisdom: This game has gone from “Hey, check that out” to “Oh, are they playing today?” within weeks. Georgia should win, but they are coming off a heartbreaking loss at Tennessee the week after getting blasted by Alabama at home. Not to mention Nick Chubb’s season-ending knee injury on the first play from scrimmage last week in Knoxville. The Bulldogs don’t have a ton of momentum, but Missouri doesn’t have a ton of offense. Flip a coin and you have as much hope of being right as I do.
PREDICTION: Missouri 14, Georgia 10

Ok, may be this will be the week Florida goes down, LSU is just to tough. I got Bama losing as well even those they play best when in a big game. Mizz is just not good, Georgia should bounce back & take the Tigers out of the east for SEC championship.

To be honest, I think Florida wins by 3. Both teams are well coached. I like the predictions here but I think Harris is the winning quarterback in this game.

Fournette is a fantastic player, I understand that. The thing of it is, LSU hasn’t played a team with a Top 5 defense in the entire country. He will still get some yardage, but he won’t pick up 200 yards like last week, more like 150. Harris is a fine young man who is very athletic and can throw the ball deep. The good news is, Coach Mac is able to coach Harris now that Muschamp is gone, which is a major plus for Florida.

This game will be an absolute dogfight; from start to finish. I think Florida will take a 14-7 lead into the locker room at halftime, tweak their gameplan a little bit and then come out ready to play in the 2nd half.

Expect Harris to also run the ball for some yardage – he ran the ball like mad against New Mexico State.

FLORIDA’S DEFENSE – Florida’s D line completely shut down Ole Miss and Missouri, which those preceding games were concerns for them to lose, but they pulled it out. Florida’s defense will play fine once again on Saturday.

If Florida wins this ball game, their chances of going to Atlanta will go up quite a bit as they would leave with a 7-0 record. I am predicting FLA’s D line to shut down LSU although Fournette will still have a good game.

Florida is heading into the biggest game of their lives and without their star quarterback and one of their secondary back ups… However we do pick up quite a few players up from the injured reserve just in time for Saturday Night’s big game. We go back to our three tight-end sets and give harris some huge targets to throw at and kelvin taylor huge blockers to run behind. I think we set up even a couple option plays (non-existent since Muschamp took over). Fournette will get his 100 yards but will struggle to get to 150.

On the otherhand LSU’s Harris was previously averaging 80 yards per game in the air before this last game against mediocre defenses and letting Fournette do all the dirty work. They gave him more chances to throw last week against a piss poor Eastern Michigan team so he could prepare for Florida. But how on earth do you prepare for the #1 defense in the land?

If I was Les Miles I would do everything I can to have LSU’s defense go all out versus him minus actually putting him on the ground with some tackles. They will need a somewhat balanced offense or Florida -will- put LSU in the Dirt.

I expect this game to be brutal and ugly. My gators 1st string defense haven’t given up a touchdown since Tennessee in week 3 and we are looking to keep the score low once again. The only uncertainty I have for my Florida team is our kicking game as scoring on LSU is never easy and we are using our backup.

Best of luck to both teams, but I put Florida winning a close game… 17-14

We’ll never know what might have been.
It was an exciting game.