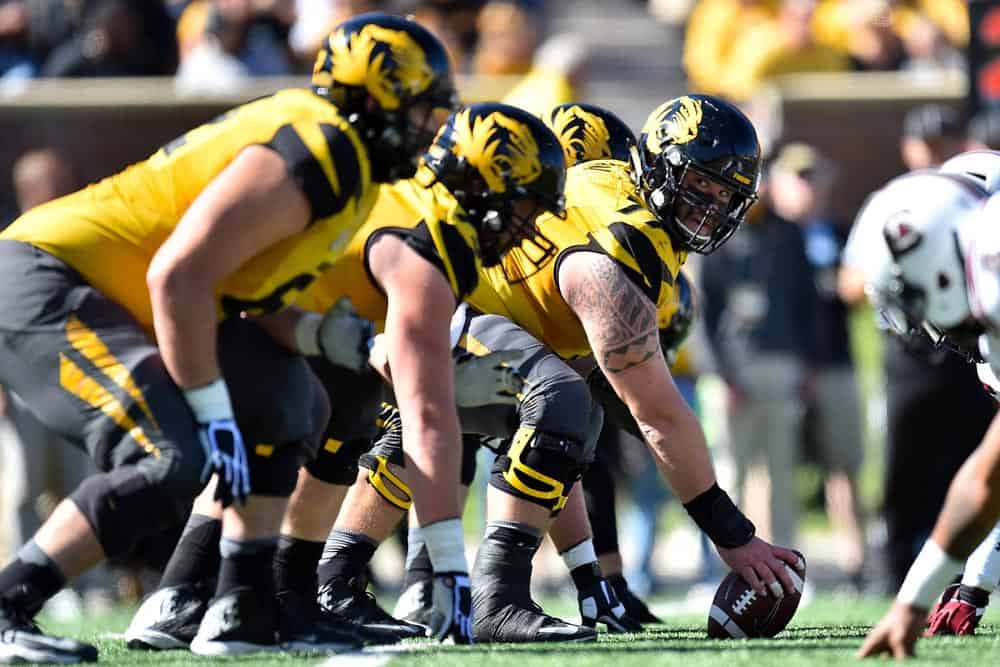 Welcome back to SEC Football Predictions. After Saturday’s “Rain Out” in Athens, Nick Saban and Alabama’s dynasty status has improved to “Yes, the dynasty is alive for now.” The Week 5 edition of SEC Football Predictions said that Alabama would make too many mistakes and Georgia would play efficient enough football to get the big win in Athens. The rain must have knocked out internet service in Athens, causing Mark Richt not to see this game plan. By the time halftime rolled around, people were checking their Apple watches to make sure it wasn’t 2008.

Speaking of not getting the message, did anyone tell Hugh Freeze that the Alabama game was only the third game of the season? It’s possible that beating Alabama was the worst thing that could have happened long term for the Rebels… and the best thing to ever happen to Florida quarterback Will Grier.

We do have bad news to report this week — there are only six games in Week 6. Looks like you’ll be getting ahead on raking those leaves or going to a wedding. Just kidding. There’s always Brian Wilmer’s ACC brand of football that you can watch. I hear that Notre Dame fell to first place in the ACC Independent Division following last Saturday’s loss to Clemson. I’ll allow him to explain in one of his 227 pieces he writes per week. Seriously, the guy is a machine. Round of applause for B-Willy. He’s a great dude and is nice enough to be editor on the stuff I put out each week and not throw his computer through the window.

It’s probably best to not test Brian’s patience, so we will begin SEC Football Predictions for Week 6 right now.

Quick word of wisdom: Don’t be surprised to see Steve Spurrier throw everything he’s got at Les Miles and LSU in this one. The Gamecocks are out of the SEC race and Spurrier could very well be in his last season as head coach. It won’t be enough to win, but the Gamecocks wake up the college football world in this early ESPN kickoff. Too bad for the Ol’ Ball Coach that LSU wakes up just in time to pull out a victory and remain undefeated.
PREDICTION: LSU 31, South Carolina 27

Big(ish) game word of wisdom: Two teams coming off very disappointing weekends with one of those teams becoming very familiar with said disappointment. So, which team can recover quickest? Which team can convert their disappointment into an advantage (if that is a thing)?

Can Georgia forget getting washed out by Alabama and keep pace with Florida in the East or will they not know how to handle the disappointment? It’s not historically rare for the Bulldogs to be coming off a head-scratching defeat, but no one in the country has been better this year at blowing two-touchdown leads at various points of the game than Tennessee. They won’t just blow a lead in the fourth quarter, they’ll turn it around on you in the blink of an eye and lose a lead in the first quarter as well.

Mentally, it seems that the road team benefits when both teams are struggling. Tennessee has already hosted one pity party just last Saturday when they blew a 14-point first quarter lead and lost to an Arkansas team that choked away a win over Texas A&M the previous week — which just so happened to be the same week as the Tennessee debacle in Florida.

Since zero football was actually discussed above, there’s no need to start now. This game will be close and Tennessee will once again find a way to be on the losing end. The Vols will find out that third down is for field goals late in a game when Georgia kicks a late field goal (on third down, of course) to avoid the loss. This week is the 14th anniversary of the Hobnail Boot game in Knoxville. Tennessee’s noses will be broken again.
PREDICTION: Georgia 23, Tennessee 20

Quick word of wisdom: Mississippi State is not as bad as the 1-2 conference record would indicate. The two losses were to the LSU Fournettes and Texas A&M. The Bulldogs shouldn’t have trouble Saturday, but the pressure will amp up each week as the margin of error is less than slim with two conference losses.
PREDICTION: Mississippi State 35, Troy 10

Quick word of wisdom: Arkansas is coming off winning a game that went just as scripted as the 2015 Butch Jones Disappointment screenplay. Alabama, on the other hand, is riding first class on cloud nine after soaking up a blowout win in Athens.

Tuscaloosa will be buzzing with the promise of a revitalized dynasty, the likes of which hasn’t been experienced at Alabama since, well, mid-September.

The secondary will be busy again Saturday after the ‘Tide shuts down Alex Collins and the Arkansas run game. Brandon Allen does not appear to be the type of quarterback that can put together the lights-out performance required to beat Nick Saban led Alabama teams.
PREDICTION: Alabama 44, Arkansas 6

Quick word of wisdom: Florida will be through half of its conference games following Saturday’s matchup at Missouri. The East is nowhere near settled and Saturday will do little to clear things up. It will actually turn the division on its head after Missouri does what it does best — win big SEC regular season football games when everyone has already counted them out.
PREDICTION: Missouri 27, Florida 17

I agree, I see Florida finally falling this weekend. S.Carolina will be playing with a lot of emotion but I don’t see them winning. Not sure if Ole Miss is going to score another 70’s points this year but good luck to them. I assume Arkansas will play Bama tough as always but coming off a huge win over Georgia then having to play @ Texas A&M next week has put them in a crunch, this is the time when they start loosing players.

The Gator D against a true freshman making only his second start? Not sure how that’s going to happen. And Eric, if you expect Missouri to win by ten, you clearly haven’t watched their offense at all this year.

UT beat UGA this week to begin their march to the SEC East title. The name of the campaign will be “Win One for Pig”

Its almost not even possible for Tennessee to play for the SEC Championship. They are already 0-2 in SEC play while Florida is 3-0 with a head-to-head tiebreaker which means they are pretty much 4 games ahead of Tennessee in SEC play. And they only have 5 SEC games remaining with Georgia, LSU, South Carolina, Missouri and Vanderbilt. They would have to go 1-4 in those games and Tennessee have to beat Georgia, Missouri, South Carolina, Kentucky and Vanderbilt. Because no way they beat Alabama.

I don’t see Florida losing quite yet. They have a dominant defense and after what they did to Missouri, I predict them Florida to win 31-17.

*After what they did to Ole Miss, I’m sorry.

Good article up until you put Missouri upsetting Florida. The Gators definitely have their flaws but Missouri is awful. Gators by 10