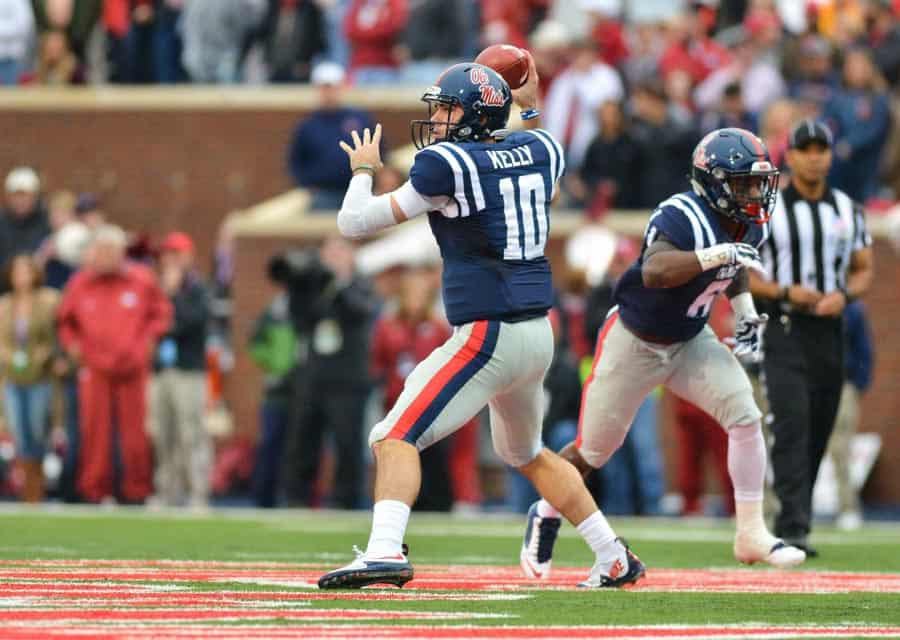 Welcome back to SEC Football Predictions, a place where you can pick Arkansas over LSU correctly, but quickly turn that genius into incompetence when Missouri and Georgia do work like some bosses.

I don’t know about you, but is there a Saturday of the college football season that you look forward to more than the very one that is upon us? I can only think of 13 other weeks, but nonetheless, it is Tax Write-off Weekend for most everyone in the SEC this weekend. The non-conference opponents visiting for this weekend’s SEC stadium open house will go home with more cash, prizes and parting gifts than every contestant that has ever played the Price Is Right. Combined.

With so many huge games of consequence just around the bend, let’s not waste any more words and get Week 12’s edition of  SEC Football Predictions finished and appreciate that a weekend full of bad conference games sure does beat a weekend void of football.

Quick word of wisdom: The fact that Florida is playing an in-state school outside The U or FSU might be the biggest story in this one. The Gators are on their way to yet another gigantic showdown in Atlanta with Alabama if they can take care of business the next two weeks. Florida is guaranteed a trip to Atlanta no matter what happens the next two games, but the “gigantic” part of the statement above is removed. Job one in this game with the Owls is to stay healthy.
PREDICTION: Florida 34, Florida Atlantic 6

Quick word of wisdom: Remember that time Florida played Georgia Southern in November of 2013 and although the Gators weren’t very good, no one expected them to lose? Hopefully South Carolina does.
PREDICTION: South Carolina 28, The Citadel 17

Biggest game of the day word of wisdom: Hidden in the plate of cupcake opponents this week is a decent matchup that has lost a bit of its luster since both teams have found themselves in the losing column all November. Neither team has won a game this month and the only thing a win will do in this one is eliminate at least one team from the West and possibly both teams. An LSU win puts Alabama back in Atlanta for the second consecutive season to play Florida for the umpteenth time. An Ole Miss win keeps hope alive in Oxford for one more week as they buy up all the Auburn Tigers gear they can find in preparation for next week’s Iron Bowl.

A Rebels win will also allow hope to be more than just the home town of President Bill Clinton. The Hogs would actually win the tiebreaker with Ole Miss in the event of an Alabama loss in the Iron Bowl. That’s, of course, assuming the Hogs beat Mississippi State this week. So, for the sake of drama, let’s take the Rebels.
PREDICTION: Ole Miss 44, LSU 34

Quick word of wisdom: Feel free to say something like, “Plenty of good seats available for this one.” Your friends who live under a rock will think it’s hilarious. Everyone else will hit you in head with a pool noodle. If Auburn wins, they become bowl eligible. The same Auburn team predicted to win the SEC. Wow.
PREDICTION: Auburn 21, Idaho 10

You know it’s Cupcake Saturday in the SEC when the winds of profanity get to blowing inside the athletic facilities during the Nick Saban media session. Saban will have you know that this game between Charleston Southern is no different than Auburn, the SEC Championship Game or the College Football Playoffs. It’s played on a football field with football players and a football. Sure, those other games have WAY more at stake, but still. So be ready Tuscaloosa. Don’t let Charleston be in charge or Nick Saban will have your section of seats removed permanently from Bryant-Denny Stadium.

Quick word of wisdom: Dak Prescott gets the privilege of hearing Alabama fans tell him his name is Sack Prescott after being sacked nine times against the Tide. The worst part is they will tell him this hilarious joke and act like Dak is the horse’s backside because he didn’t find it funny.

Anyway, Arkansas is on an Arkansas-esque run. They are winning big in November and not looking back. They are still alive in the West with one week to play in the regular season. That’s no small feat. Alabama more than likely wins the West, but Arkansas will close the season the hottest in the conference.
PREDICTION: Arkansas 37, Mississippi State 17

Quick word of wisdom: As I always do, I decided to talk smack about Missouri last week because they were definitely going to lose. Then Missouri beat BYU 20-16. This week I will play it safe and take the better team.
Tennessee 34, Missouri 28

Quick word of wisdom: Texas A&M will be making their first trip to Nashville and Vanderbilt hopes the sights and sounds of Music City distracts the Aggies enough to get one win closer to bowl eligibility. This game will pit two great defensive coordinators against each other with John Chavis in the maroon corner and Derek Mason in the gold. Mason will also throw in some head coaching duties, but his Commodore defense has been stellar all season. Don’t be surprised when A&M leaves Nashville with an L.
PREDICTION: Vanderbilt 24, Texas A&M 17

Quick word of wisdom: The third and final game in the SEC Network Alternate triple-header will take place in Lexington. Kentucky beat Duke on Tuesday night in a game that showed the nation that this team can repeat what it did last season. And the football team plays Charlotte and could very well win.
PREDICTION: Kentucky 27, Charlotte 10

I’m taking LSU over Ole MIss just because Les Miles job is on the line which makes no since to me at all, may be I can get one right this week. I do not see Vandy beating A&M but Vandy does play good defense. Arkansas is playing much better & getting into a groove but I don’t see them doing what they did to LSU last week but I agree, Hogz will win. I think Auburn will open it up on Idaho for what its worth.

Vandy over A&M would be a titanic win

No way does Missouri loose at home Saturday night,its Senior night and Gary Pinkels last home game that place will be full and a very emotional game

There are no winners this weekend. It’s FCS-Cupcake weekend, rather than playing 1 more conference football game. As Trump would say, you are all losers!

There is only two FCS on the schedules, thaks for the update though.

The Gators will win by more than 28 points. They have to.

no matter how we get there WE ARE BACK go gators.remember closeness only counts with horseshoes and handgrenades

True a win is a win. But beating a 2-9 c-usa team at home by 6 in OT shows that yalls Vandy game was no fluke. BAMA will beat the shit out of Forida. Hell, Bama’s cupcake is 10 times better than FAU! Chomp while you can.