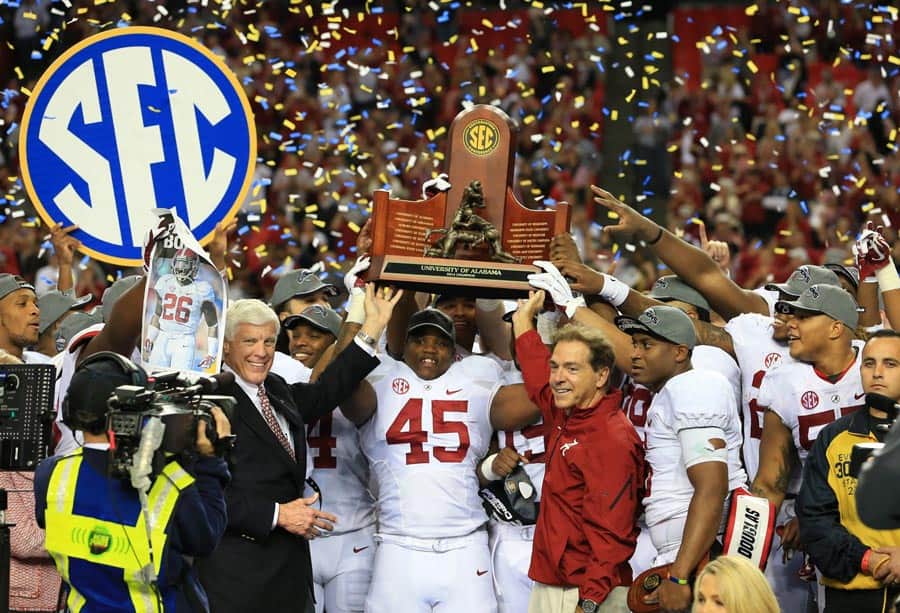 Try not to cry as the SEC Football Predictions team of predictors (me) crawls back under a rock until the bowl season gets underway.

Thank you for reading SEC Football Predictions each week, especially when late-night typing brought Trent Richardson back to Alabama as running back, among many other uh-ohs. Have a great Christmas and may your team win all the football games.

Championship Game words of wisdom: First of all, forget the talk of an Alabama blowout. Sure, we may be accused of being way too nice if we label Florida’s offense as pedestrian in the month of November, but the Gators defense is loaded with future NFL talent. Florida defensive backs won’t drop free pick-six passes from Jake Coker like Auburn did last Saturday.

Florida’s offense has collaborated with the special teams unit to create one of the worst scoring machines in the history of football. This machine is broken. The final score will give the illusion of a blowout, but the game will be a hard hitting brawl. Alabama should be forced to kick three field goals and Adam Griffith will come through on all three as he peaks at the best time of the year. If Griffith struggles any at Auburn like he did early in the season, Auburn may have won the Iron Bowl. Alongside these three field goals will be two touchdowns by the Alabama offense and these touchdowns will more than likely come shortly following a huge turnover caused by the defense.

As tempting as it is to predict a shutout, there’s just too much electricity running through the Georgia Dome to allow one team not to score. Florida will score a touchdown and it may even come early on a play that will wake up the Alabama defense. Based on the 2015 season, the score will more than likely come on a pass play where the ball is tipped by 15 Tide defenders before landing in the hands of a Florida receiver that never even breaks off his route.

Bama will become the first team to repeat as SEC Champions since Tennessee in 1997 and 1998. Florida is the only other team to accomplish this when they won somewhere around 24 SEC Championships in the 90’s under Steve Spurrier.
PREDICTION: Alabama 23, Florida 7

Good pick. I have Florida scoring 13 though (touchdown with a missed PAT).

We are bama and we will be no.1

Based on something I read from a fortune cookie, I’m going to say Florida 23-20!

Don’t forget, with Florida out of the Natioal Championship picture, Alabama shoe in to try and get it all again, Florida will come to play. They play like the did against Ole Miss, defensively it may suprise Alabama. This is Florida’s National title game., Florida 21 Bama 20. On Florida’s will to play spoiler.

half of these people are just Florida fans lol. prediction: 35-10 alabama