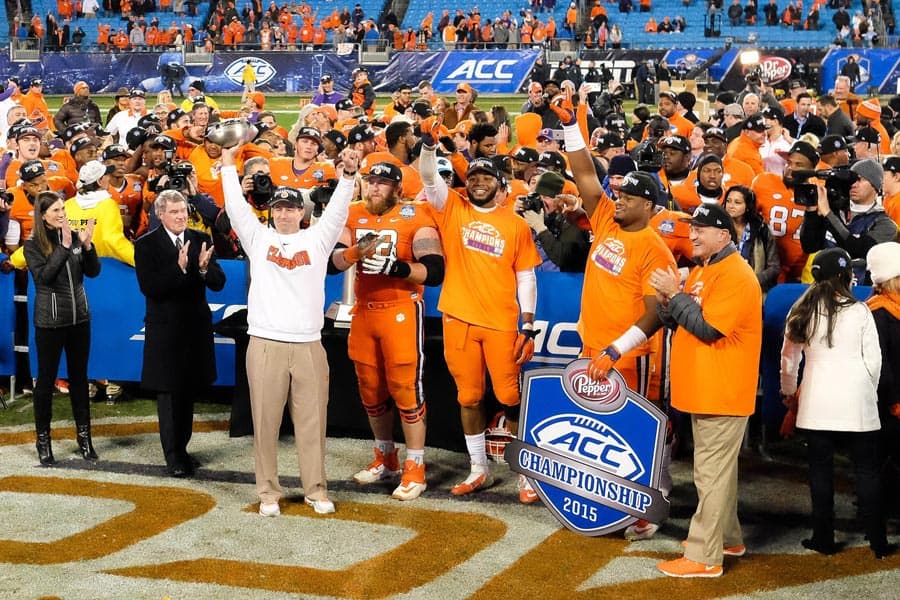 The 2015-16 bowl schedule is set to be announced today, including the College Football Playoff and New Year’s Six games.

1:19pm
To very little surprise, Navy will play in the Military Bowl presented by Northrup Grumman. Their opponent will be announced later today. Also, Cincinnati is headed to the Hawaii Bowl.

1:28pm
BYU coach Bronco Mendenhall will coach his final game for the Cougars in the Las Vegas Bowl. No opponent has been announced. Also announced:

1:44pm
USF will participate in the Miami Beach Bowl. Their rumored opponent is Western Kentucky. There’s quite a bit of intrigue behind that one, if it happens. Also, Stanford will head to the Rose Bowl, where they will face a Big Ten opponent (Iowa?).

Heard from several sources that Rose Bowl will indeed be Iowa vs. Stanford.

2:59pm
The earlier mention of USF-Western Kentucky in the Miami Beach Bowl is now official, per ESPN’s Brett McMurphy.

3:02pm
The Sun Belt announced a moment ago that Georgia State will play in the AutoNation Cure Bowl. The other Sun Belt teams (Arkansas State, Georgia Southern and Appalachian State) have already been referenced.

3:08pm
We told you earlier that Stanford and Iowa will face off in the Rose Bowl, and that Oklahoma State will face Ole Miss in the Allstate Sugar Bowl. Those matchups were just announced by ESPN.

3:11pm
Ohio State and Notre Dame will play in the Battlefrog Fiesta Bowl. Houston and Florida State will play in the Chick-fil-A Peach Bowl. Also, the matchup of Louisiana Tech and Arkansas State we mentioned earlier in the R+L Carriers New Orleans Bowl is now official.

3:16pm
Tulsa will play in the Camping World Independence Bowl against a to-be-named opponent.

3:21pm
A number of announcements coming now. Washington State will face Miami in the Hyundai Sun Bowl. North Carolina will play in the Russell Athletic Bowl. The Lockheed Martin Armed Forces Bowl will feature Air Force. Southern Miss will play in the Heart of Dallas Bowl.

3:23pm
UConn and Marshall will play in the St. Petersburg Bowl.

3:31pm
Toledo and Temple will play in the Marmot Boca Raton Bowl.

3:33pm
Two more:
Northern Illinois and Boise State will face off in the Poinsettia Bowl, while Texas Tech goes to the Advocare V100 Texas Bowl.

3:36pm
Louisville gets one of the shorter roadies of the postseason. They will play in the Franklin American Mortgage Music City Bowl.

3:39pm
Northwestern and Tennessee will travel to the Outback Bowl.

3:42pm
Tulsa’s opponent in the Camping World Independence Bowl will be Virginia Tech.

3:44pm
Pitt and Navy will finalize the Military Bowl presented by Northrup Grumman.

3:46pm
As someone mentioned earlier in the comments section, Florida and Michigan will go in the Buffalo Wild Wings Citrus Bowl.

3:47pm
Memphis will play in the Birmingham Bowl, likely against Auburn.

3:51pm
TCU and Oregon are confirmed for the Valero Alamo Bowl. If you like offense, there’s your game.

3:53pm
USC will play in the National University Holiday Bowl. UCLA is in the Foster Farms Bowl.

3:56pm
The Royal Purple Las Vegas Bowl is set – BYU vs. Utah. Lots of heat to that one.

4:05pm
The long-rumored UCLA/Nebraska matchup in the Foster Farms Bowl is set.

4:11pm
It’s apparently going to be Kansas State and Arkansas in the AutoZone Liberty Bowl.

4:14pm
The Motel 6 Cactus Bowl will be leaving the light on for Arizona State. Also, Texas Tech’s Texas Bowl opponent will be LSU.

4:19pm
West Virginia will lace them up against Arizona State in the Motel 6 Cactus Bowl.

4:24pm
As someone here suggested earlier, Penn State will indeed play in the TaxSlayer Bowl against Georgia.

4:26pm
Washington will play Southern Miss in the Heart of Dallas Bowl. Cal will play Air Force in the Armed Forces Bowl.

4:35pm
Arizona and New Mexico will participate in the Gildan New Mexico Bowl.

4:41pm
As the carousel slowly grinds to a close, it looks as though Nevada and Colorado State will play in the Nova Home Loans Arizona Bowl. Stand by for confirmation.

4:48pm
That’ll bring the afternoon to a close. Thanks for reading along, commenting, refreshing and spending your Sunday afternoon with us. To find out the time, date and network for your favorite team, check our Bowl Schedule. To insult me interact with me, click the handy little button below!

When will the rest of the bowl announcements be made? Im wanting to know where the Florida Gators will be playing

New Year’s Six around 3pm ET, other bowls will start coming out after that.

Florida is going to the Citrus Bowl (against Michigan), it’s almost a done deal.

I hope so. That’s not too far for me to go to watch

I am anxiously waiting to hear about Arizona State. Several predictions but them playing in DFW. My daughter is in the band at ASU, but we live in Ft Worth. A local bowl game would be AMAZING!

Please give WKU a better team than south florida.Come on there only 11-2.

Dude, you haven’t seen USF play. And it’s ready made intrigue with WKU’s old star QB and head coach Willie Taggert coaching the Bulls. They have an NFL ready RB in Marlon Mack, the offense skill positions are young and took a few games to gel.

USF started 1-3 before their young team got their bearings. Went 7-1 after that so not a pushover by any means.

where is iu going to play and who

Where is TCU playing?

You think? I thought maybe the Alamo Bowl? That’s why I haven’t bought tickets yet. :D

I have heard Alamo against my Oregon Duck. I am predicting a 105-100 victory for Oregon.

Is Arkansas to the Liberty Bowl a lock pretty much?

Does anybody know where Mississippi State or Penn State will be this year? Anxiously awaiting these announcements!!

Is Tennessee heading to the Outback bowl?

Many of the non-listed games are still unofficial. I promise to get you all the updates as I get them. Thanks for reading!

Could you explain how the bowl games are decided? Do teams get to pick out of a couple options based on their rankings/records?

Somewhat. The entire process is really confusing. When you see bowl projection sites, and they mention “No. 8 SEC” or whatever, that’s not the eighth-ranked team in the conference, it’s the eighth pick of eligible teams from the conference. Bowls tend to pick what they think will be the matchup that draws the most money, as one might imagine, and then other games are left to select from the remaining options. That’s the best — and shortest — explanation I can offer. :)

Thank you, Brian. That is very helpful :)

Hoping the Aztecs don’t fly to Hawaii (bad turf and long travel) and don’t play Cincy. Was looking for a different match-up after going 10-3 (8-0 in MWC).

Long travel?? Closest team in the country to Hawaii.

tennesse to the outback bowl, penn state to the taxpayer bowl mississippi state to the belk bowl,arkansas to the liberty bowl, tcu to the alamo bowl,

Wanting to know where Memphis and Tennessee will play

Memphis is most likely headed to the Birmingham bowl vs auburn. Tennessee should be going to the music city bowl vs nc state

We might get Utah vs BYU in Las Vegas Bowl

What bowl will the Miami hurricanes play in

Not all what I wanted to happen, but thanks.

Akron is headed to the potato bowl vs Utah state

Any idea where Akron is going?

I would *guess* the Potato Bowl. We should find out in a few minutes.

So, how about Washington?

minnesota, nebraska, and san jose st are the 5-7 teams in bowl games

washington vs air force in the Armed Forces Bowl

What about Georgia and Georgia state and the Arizona bowl

Does anyone know about the Nevada wolfpack?

Arizona Bowl or New Mexico Bowl would be my guesses. We should know soon.

There’s a problem here…..only two teams haven’t been announced, and both would be going to the Arizona Bowl. But those two teams are Colorado State and Nevada…..both in the Mountain West. Unless they want two teams from the same conference competing, somebody needs to make a switch.

I think people are okay with that because they didn’t play during the regular season. Also, Campus Insiders is involved with both the Mountain West and that bowl game, as the great Matt Sarzyniak pointed out on Twitter.

Any word on CSU Rams?

This isn’t the first time a league has two teams in the same bowl. Nebraska and Oklahoma both went to the Orange Bowl in 1979 as members of the old Big 8. In that case, they had also played in the regular season also.