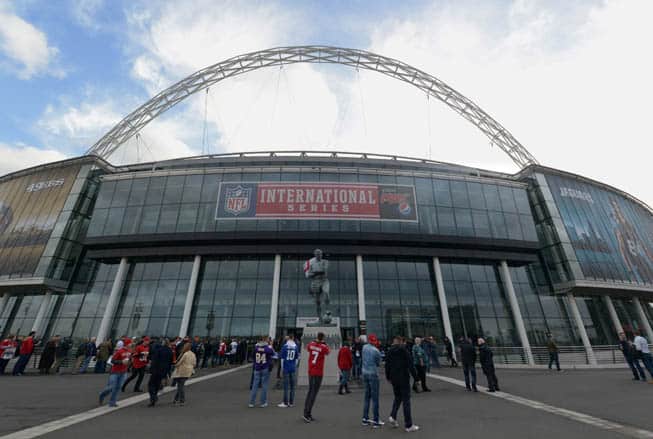 The 2014 NFL International Series schedule has been finalized with dates, times, and TV coverage for all three match-ups.

The schedule features a new start time and fourth game window on Sunday. The new kickoff time is 9:30 a.m. ET, and that will be the slot for the Detroit vs. Atlanta game in Week 8 on Sunday, Oct. 26, 2014 (FOX).

The International Series kicks off in Week 4 on Sunday, Sept. 28 with the Oakland Raiders hosting the Miami Dolphins at 1pm ET on CBS.

The third and final game in London features the Jacksonville Jaguars hosting the Dallas Cowboys at 1pm ET on FOX.

Each game of the International Series will be played at Wembley Stadium. Due to an increase in popularity of the games in London, the NFL added an additional contest for the 2014 season.

Sad to see fans of NFL teams losing a home game each year. I find it hard to believe that Brits are clamoring to see American football.

Same thing happens with the Bills except for every year. The play 7 home games 8 away games and 1 game in Toronto that always has an away feel to it because the away team draws more fans. I am from Toronto, and a HUGE NFL supporter but this just doesn’t work for so many reasons

Bill M, my point exactly!!! Thank you!!! I would feel robbed if I was a Raiders, Falcons or Jags fan.

iactually wish they lined tgem up with US holiday weekends, so fans can fly out there and teach brita thst there is no need to fight ( ala soccer hooligans). but again, imagine an Arsenal hooligan who also loves the Raiders or Philly or All three.

i never correct typos, used siri and i am not being paid, so deal with it.

in response to Dave, who doubts we Brits are keen to see these games in London, on the contrary, we are extremely grateful for them and enthusiastic about them, and many of us hope to one day enjoy a London franchise. how bout dem apples?

Well apparently they don’t teach “you Brits” how to use a reply button when responding to a specific comment.

typical yank attitude, (why share) beleive it or not having the game in the uk makes the nfl a lot of money and most of the uk peaple can get to see it within a few hrs of traveling. rather than a 9-10 flight, even in the US you need to fly to some games as they are so far away.

Typical snobbish Britt attitude. It takes a home game away from a team. It is one thing when it is the NHL or NBA they have 41 home and away games a year, missing one is not that big of a deal. But when you have 8 home games and only 8 days to generate revenue for that team at home it is 1/8 of your earnings for that year gone. Not to mention the 2,000+ stadium staff who miss out on a pay check for that week. I work at the Rogers Centre in Toronto for when the Bills come to play in our building and I make a good chunk of money for that, I would hate to have someone take that away from me. Not to mention that some teams like Detroit, Buffalo, and others where their cities are in economical ruin, it takes away from their economies a significant amount from not hosting 1/8 of their games.

It still puts those teams travelling to the UK at a huge disposition money wise for the franchise and for the employees that help run that team. Having one game a year there is even a pain in the ass.

By the way before you call me a “typical yank” with a “typical yank attitude” I am a Canadian and a Canadian with a realistic attitude that sees the bigger picture. Yes the UK may make the NFL a lot of money, well how about getting your own franchise over there then, or supporting a league that was there like NFL Europe. The only reason Roger Goddell likes these games is because he wants a franchise there, and NO ONE in Britain has stepped up to fund one. Please think outside of the box other than “the UK makes the NFL a lot of money” because frankly they don’t make as much as you think to back up a statement like that.

NFL EUROPE failed. you Brits can’t be that interested

Why doesn’t the EPL have 3 games in America then???? I’m sure fans wouldn’t be too happy either….

I for one am an American who loves these London games and have been traveling to the UK to see them since they started. I am excited to go again in 2014. They are always packed and sold out. Don’t know why everyone is attacking Brits and Yanks rather than focusing on the discussion at hand. Clearly there are people on both sides of the ocean who both like and dislike this concept. So be it. While it exists I love it. I consider it a bonus to get to see my team overseas, not a “loss of a home game.” Glass half full. All depends on perspective. Continue to whine if you want, but let those who enjoy it do so.

A lot of the fans in the stadium for these games are service members stationed over seas. It is cheaper for them to fly to London than to fly back home. Plus we have a base right there. Those service members get a chance to see the games! Yay!!!!!! Huge plus!!!! Didnt anyone notice that when watching the games??? A lot of the fans had on military uniforms???? Good on you NFL for giving my brothers and sister in arms overseas this chance!!!!!!

if i were a season ticket holder i feel that as part of my package it should include the game at Wembley with the option being mine to go abroad, donate my seats to the service members or sell them on stub hub. A season ticket package is just that, 8 home games no matter where they are held

In exchange, there will be an English cricket match in Minneapolis in January at Target Field. People will flock from all over the US to enjoy the weather and have tea.