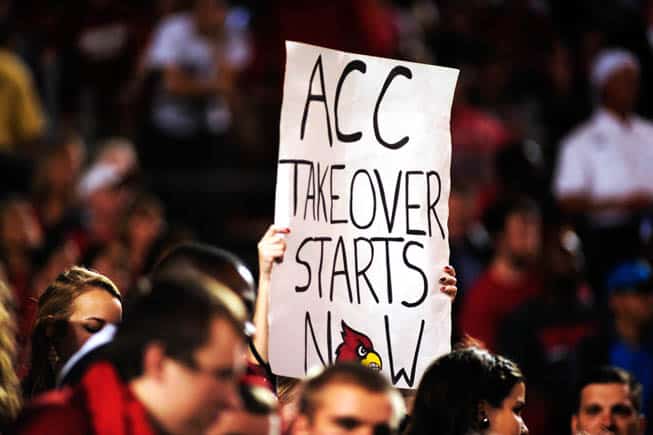 Realignment in college football continues this season with 12 teams either changing conferences or moving up to an FBS conference from the Football Championship Subdivision.

Today, July 1, is the day when each conference move becomes official for the 2014 football season. Let’s take a look at each Football Bowl Subdivision conference and which teams have made a change.

Louisville officially joins the ACC today from the American Athletic Conference. The Cardinals were placed in the Atlantic Division, essentially taking Maryland’s spot. Here are the updated ACC divisions:

Louisville has departed the American Athletic Conference for the ACC, while Rutgers left for the Big Ten. East Carolina, Tulane, and Tulsa all join The American from Conference USA. In 2015, the American will split into East-West divisions after Navy joins.

The Big 12 neither adds or loses members for the 2014 season. The conference appears to be content with ten members, no divisions, and no championship game.

The Big Ten Conference expands to 14 teams this season with the addition of Maryland and Rutgers. They have also scrapped the Legends and Leaders divisions, instead going with East and West divisions:

Conference USA has five changes this season with three members departing and two entering. East Carolina, Tulane, and Tulsa each depart for the American. Old Dominion moves up from the FCS while Western Kentucky comes in from the Sun Belt Conference. Here are the C-USA divisions for 2014:

Although not technically a conference, three teams that were FBS Independents in 2013 are moving into conferences in 2014. Idaho and New Mexico State join the Sun Belt Conference while Old Dominion moves into Conference USA.

Barring any additional changes, Army, BYU, and Notre Dame will be the only FBS Independents in 2015.

Incoming: None
Outgoing: None
Future moves (2015): None

The MAC neither adds or loses members for the 2014 season. They currently have 13 members, but will drop down to 12 when UMass departs after the 2015 season.

The MWC neither adds or loses members for the 2014 season.

The Pac-12 neither adds or loses members for the 2014 season.

The SEC neither adds or loses members for the 2014 season.

The Sun Belt adds four members and loses one for 2014. Appalachian State and Georgia Southern move up from the FCS, while Idaho and New Mexico State come in after playing one season as FBS Independents. Western Kentucky leaves the SBC for Conference USA.

Here are the eleven Sun Belt members for 2014:

Calling my shot – the American adds Old Dominion and Army within the next 2 years. That brings the Army-Navy game in house (HUGE TV ratings) and helps to solidify the American’s market presence on the East Coast (New York-Philadelphia-Maryland-Virginia-North Carolina….and Florida) for the AAC’s next TV deal. And, before you poke at the Old Dominion idea, Old Dominion football has averaged home attendance similar to Memphis, Tulane, SMU, and Tulsa…as an FCS school. And, back in December, Old Dominion’s governing board approved a new on campus, 30,000-seat stadium.

The American also wants BYU and Air Force, but that will be a much more difficult expansion to land.

I wonder why the Sun Belt added NMSU and Idaho….they could have a 9-team conference (8-game round robin schedule) with teams in geographic proximity. That’s a head-scratcher.

Idaho belongs in the Big Sky conference and would be a good fit.

NMSU is a decent fit for C-USA, especially with the NMSU-UTEP rivalry. Good replacement for when Old Dominion leaves to the AAC.

Jacksonville State will probably move from FCS to FBS and fill that extra “spot” in the Sun Belt. I don’t think any of the other changes will happen the OP mentions. JSU moving up restores old rivalries with Troy and App State, and gives the Belt the championship game and 2 divisions:
SBW: Idaho, NMSU, TxSt, ULM, UL, ArkSt
SBE: USA, Troy, JSU, GaSo, GaSt, AppSt

Idaho simply did not want to rejoin the FCS and you can’t blame them. I also see Army in the AAC sometime soon. BYU to the BIG 12 sooner than later as well.

Idaho and UMass should go back to 1-AA…….I don’t see Army joining a conference this decade (remember how their time in C-USA faired?).

I can see The Big 12 adding BYU and Cincinnati in the next 2 years. Although Boise St and Nevada would be a good add also.

Boise State and Nevada in the Big 12? Laugh Out Loud.

Geographically it makes sense. Football wise they would be a good fit. 14 team would be better. Network wise could help. Boise St took on the top teams in college football and won.
(2006 Oklahoma, 08-09 Oregon, 10 VT and Utah, 11 Georgia)

Nevada might struggle but would get better as time goes on. They’re better than Kansas.

Network wise it would help? Boise and Reno aren’t even Top 100 markets. To give you an idea as to how that doesn’t make any sense, that’s like saying they should add Western Michigan University because Grand Rapids-Kalamazoo-Battle Creek is the #39 TV market (geography aside). People don’t care about Boise anymore, they had a good run but it’s over now. Nevada’s football stadium capacity is nearly 3k below Central Michigan University’s… so how drunk are you that you think this would make any sense at all?

From what I understand, B12 isn’t looking to expand anymore. Even if it does mean more TV money, the current teams just divided up a big purse and the consensus is that more teams would just lower the overall totals for each school in the long run, even with a championship game. Boise St. and BYU would both be good additions if they wanted to add teams in the west but it doesn’t sound like the interest is there right now. Hopefully, for those two team, that will change quickly.

That’s way I said COULD help!!! NOT WOULD. CAN YOU READ????
Boise St is in Pac 12 territory and they are a solid team. Where do you think their recruits come from.
And I don care what capacity Nevada stadium is, they are still better than the bottom of the Big 12

Yes, I can read – can you comprehend how terrible of a thought that is from the get-go? That’s like saying Northern Illinois COULD join the Big 10 – how much sense does that make? That’s on par with what you’re saying.

Depends completely on what the B1G does for teams 15 and 16. If they pick apart the other leagues…. namely the XII, then it won’t have much choice but to react. BYU makes a lot more sense than Boise State. The population of Utah, access to a new state’s televisions…. but that argument works better with both Northern Illinois (Illinois cable/satellite contracts & Chicago) and Cincinnati (Ohio and Kentucky). So, first figure out how the B1G moves. Do they take Kansas (the best adjacency choice) and then Iowa State (from U of I pressure) or Missouri (in some secret joint SEC deal where the SEC takes Oklahoma, Ok State, and Texas?) Then the XII will be taking about anyone they can and not hold their nose.

Shep just stop. You don’t know nothing. Good luck with your next pointless comment

Didn’t quite dominate last year, did they?? Also, how come no one ever talks about Tennessee, Vanderbilt, the Mississippi’s, Kentucky and Arkansas when they speak of the SEC??

Ok, Bama’, Auburn, Florida, Texas A&M, I get it. No one ever talks about the middle and bottom of the conference. And if you want to get into a shootout about how the mid and bottom have fared against other conferences, I will gladly provide the stats to prove my point.

Vanderbilt was 9-4 in 2012 and 2013. They have been talked about…..so much so Penn State hired away James Franklin. Tennessee is one of the most successful programs of all time. Yes they are on a downward trend but trends don’t last very long.

If all that actually happens I will be like, wow someone called that in 2014!

Wow dirk I like it, except for the Pac 14 I see Boise St instead of Hawaii. And I see the B-12 expanding sooner than 2018, especially if they don’t have a team make the final four this year.

Here’s a zinger to think about. Considering Conference are aligned today for television numbers, what do you think about Tulane (New Orleans market) and Cincinnati joining the Big 12? I would think the Big 12 would like to be in Louisiana for both the TV market placement and for recruiting and Cincinnati gives the Big 12 the same scenario in the Southern Ohio and Northern Kentucky neighborhood. I think if Tulane was in they would grow to fit the Big 12 role and have the potential to succeed. These re-alignments are not just about the short term benefits, but the long term benefits and I think this presents a long term benefit for both Conference and the Schools.

Why wouldn’t UL Lafayette be a more attractive option compared to Tulane? They are a larger school, have a higher average attendance at sporting events, conference champs in 4 sports last year, ranked in multiple programs, 3 consecutive football bowl victories (the most recent against Tulane and there were more Cajun fans at that game in New Orleans), etc… I think they are an attractive University to peruse…. albeit I am also an alum and may show slight favoritism..

Will, your response is all very good, but what sets Tulane apart from Lafayette is the City of New Orleans and the history of the schools. The Ragin’ Cajun have had a great run and it’s been good for college football, but in my opinion they don’t fit for what the Big 12 could use. Thanks for sharing your thoughts.

Jeff….. I don’t think Tulane belongs in the Big 12 and question the validity of their AAC membership. If they are unable to get noticeable support in their own metro area why would they be attractive for the Big 12? I like Tulane and they are a great institution but floundering around at the bottom of CUSA year in and year out with an occasional decent football season (7 – 6 last year) does not equate to a program that would “grow to fit the Big 12 role…” That being said, I am also a realist and know the Cajuns are not ready for a Big 12 caliper conference…. but they are a good fit for the AAC. My comment was simply pointing out that if conference “upgrade” is based on name then yes perhaps your comment carries weight, but if it is based on performance, support, sales, attendance, championships (recent), diversity of successful athletics, etc. there are other schools that fill all the categories better.

Tulane!?! Really? The XII could take UCF and USF and capture a big share in FLORIDA! Plus, Orlando stomps New Orleans.