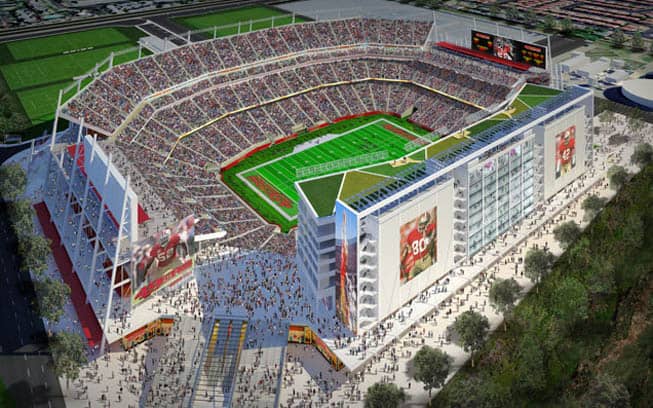 The 2014 Cal-Oregon football game will be played at Levi’s Stadium in Santa Clara, Cal announced on Tuesday.

The game will be played on Friday, Oct. 24, 2014 and it will be a home game for the California Golden Bears. ESPN or FOX will televise the game to a national audience.

Cal-Oregon will also be the first ever college football game at Levi’s Stadium, which is currently under construction. The stadium opens in August 2014 and will be the new home of the San Francisco 49ers. It will also host Super Bowl L in 2016 and will be the home of the Kraft Fight Hunger Bowl beginning in 2014.

“Playing the first college football game at Levi’s® Stadium provides an exceptional opportunity for our student-athletes, alumni, students and fans to be some of the first to experience the new venue, one that will soon play host to a Super Bowl,” Director of Athletics Sandy Barbour said. “I’d like to thank the Santa Clara Stadium Authority for allowing us to reach an agreement to play at the new stadium. At the same time, it gives our campus the ability to fully study the effects of weeknight games and develop solutions that not only minimize the impact when school is in session, but also accommodate our tens of thousands of fans coming to California Memorial Stadium.”

“We are thrilled at the opportunity to play the first college game ever at Levi’s Stadium,” UO athletic director Rob Mullens said. “We have tremendous respect for the 49ers organization and have had an opportunity to meet with some of their leadership. Their commitment to innovation and technology within the new stadium align very well with our athletic department goals.”

California is slated to open the 2014 season at Northwestern on Aug. 30. The Golden Bears also host Sacramento State on Sept. 6 and BYU on Nov. 29.

All three of Oregon’s non-conference games in 2014 will be played at Autzen Stadium. The Ducks are scheduled to play South Dakota on Aug, 30, Wyoming on Sept. 6, and Michigan State on Sept. 13.

The 2014 Pac-12 Football Schedule is slated for release in early January.