The American Athletic Conference has set their home and away football opponents for the 2014 season, conference commissioner Mike Aresco announced today.

The 2014 season will feature new conference members East Carolina, Tulane, and Tulsa. Navy will join the conference in 2015 and the conference will then split into divisions and stage a championship game. 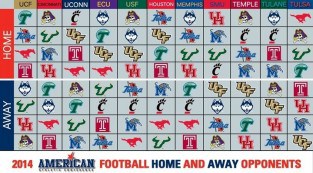 When does the actual schedule come out

Last year’s schedule was announced on March 6th. I would assume around the same date for this year.

Yes, so does UCF.