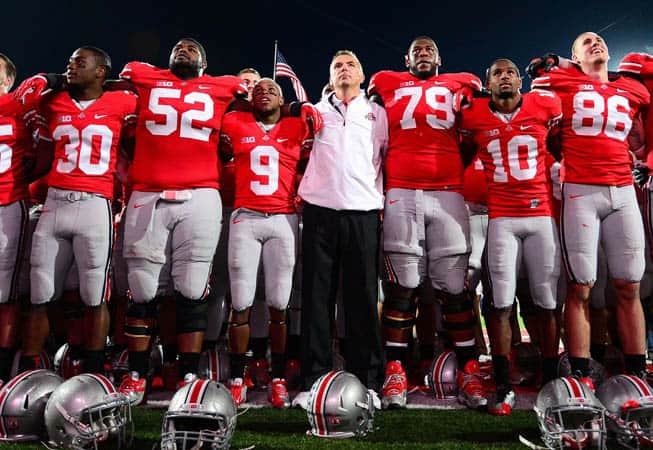 The SEC leads all conferences with six teams in the AP Top 25 poll. The Big Ten and Pac-12 are tied for second with five teams. Listed below is the full conference breakdown:

What do you think of the poll? Is your team ranked? Let us know in the comments below.

#42 according to the poll above.

Well the Stage is Set but people Remeber on 9-7-13 it’s a VERY Bigger game between #1 Alabama VS. #7 Texas A&M which is Huge and that Ladies and Gentelmen will be the Change of History, will the Tide Roll through the Aggies, Or does history repeat itself and the Aggies of Texas A&M give Alabama there first Lost Again?

That game between Alabama and A&M is Huge but if Manziel is not allowed to play due to investigation and Bama wins people will say its because of him not there, if he is allowed to play and A&M wins and then has to forfeit all wins with him playing then Bama will have an asterisk on their record for that game, if A&M wins outright with him in then have to see how season plays out, If Bama wins with him in then same scenario as alot of games left on schedule. The AP poll has one ? mark and that is Louisville how do they get ranked ahead of LSU who has a much tougher schedule than an AAC schedule. LSU has to play ranked teams in Bama, Florida, Georgia, A&M, not ranked OLE Miss and Miss State. Compared to Cincinnatti, Kentucky, Central Florida, Temple, Rutgers etc there is no comparison to LSU and Lousiville’s schedule it will all play itself out once season starts and loss by Louisville early and they will tumble down fast especially if that loss is to an unranked team. Louisville should be ranked but not that high up.

why is Manziel under investigation?

For possibly receiving money for autographing items for memorabilia dealers.

Now will there be a 4 team playoff this year or is it next year? If there was a 4 team playoff last year who would it have been? Is it the top 4 BCS teams? That would have made it Notre Dame, ‘Bama, Florida and Oregon. I think Stanford would have good reason to gripe since they beat Oregon and won the PAC 12 but I’m sure other teams would have had beef too. It should go to at least a 8 team system or a 12 team where the top 4 have bye in 1st round.

The 4-team playoff begins after the 2014 regular-season. The teams will be picked by a selection committee, so it won’t necessarily be the top 4 in the polls.

The playoffs start in the 2014 season. I think it should have 6 teams, so the top 2 can get a bye, like they used to go to the Title game. First round can be played during Week 16 (week after conference championships).

The 4-team playoff format is not much better than the current system, just a 4-team beauty pageant instead a 2-team one. I would favor a 10-team format between the ten conference champions. You would need to start with a championship game for all ten conferences, then the champs of the MWC, MAC, CUSA and Sun Belt would play each other in the first round while the champs of the six bigger conferences have a bye week. The two first-round winners would play the two top-ranked major conference teams in the second round, and so on. My only problem is I haven’t figured out what to do with independents. Maybe ND and BYU would be required to have at least some affiliation with a conference to qualify for a playoff birth? A 4-team selection-by-committee format still sucks, just not as bad as the BCS.

GO CANES!! Surprised so many college football critics say how good Miami will be this year but could not get enough votes for top 25. I guess Canes fans will have to wait until week 2 when we host the Gators and put a hurt on the supposed #10 team in the country in Miami!
Cannot wait for season to start!

its always the same dern teams every year, YAWN, and and there will be a 2 loss SEC ranked ahead of an undefeated, notre dame is trash, the bcs is trash, the ncaa is trash, everyone cheats and steals, these people are ruining our great country.

This country was founded on cheating and stealing. What do you think the pilgrims were doing when they shaking hands with the Indians. Oh by the way go Noles!

Your grammar indicates that you must be an aggie fan.