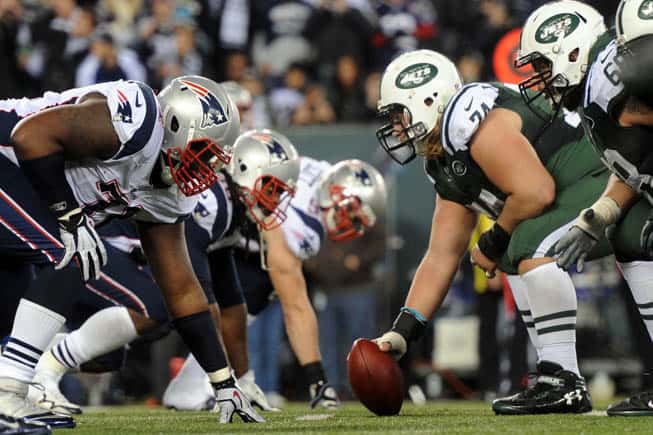 The 2013 NFL season begins this week, and Thursday Night Football kicks off in Week 2 (Sept. 12) when the New York Jets travel to face the New England Patriots. The game will be televised by the NFL Network at 8:25 p.m. ET.

The defending Super Bowl champion Baltimore Ravens will not be featured in a Thursday night NFL Network game, but the runner-up 49ers will be. San Francisco travels to St. Louis on Sept. 26.

Overall, Thursday Night Football on the NFL Network will include 13 regular-season NFL games.

Note: Baltimore opens the 2013 NFL season at Denver on Thursday, Sept. 5 at 8:30 p.m. ET on NBC. Although the game is on Thursday, it is branded as part of the Sunday Night Football package.

All games below at 8:25 p.m. ET on NFL Network unless specified.

Wtf, there is a game on Thursday Sept 5 at 5:30. Broncos vs Ravens and it will be on ESPN. Stop confusing people.

It’s going to be on NBC too!!! Why do you always save the fans guessing NFL?!?!

It’s actually on NBC. This list came from the NFL, and they don’t list the Baltimore-Denver game on their Thursday night football page for some reason. It’s listed on the Sunday night page. We added a notation above.

The game on September 5 is on NBC. Stop confusing people…

Although that game wasn’t included on the list, we added a note above. Thanks for visiting the site and bringing this to our attention.

If a game is on NFL network is it on any other channel?

Yes, this is correct. But it is rare from what I can tell.

so the brono’s play tonight at 8:30pm on NBC that is what is is showing on my tv…..is that correct?