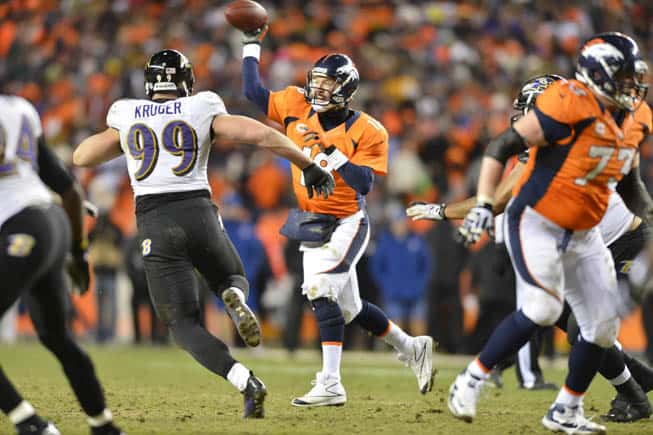 Sunday Night Football kicks off with a special season-opening game on Thursday, Sept. 5. The Super Bowl champion Baltimore Ravens travel to face the Denver Broncos at 8:30 p.m. ET on NBC.

Games on Sunday begin on Sept. 8 with the Dallas Cowboys hosting the New York Giants. That game, as well as all remaining Sunday night games, will be televised at 8:30 p.m. ET on NBC.

This is bs, the Lions never get isolated prime games on Thursday or Sunday night. They have 1 MNF game this year, and their home MNF game last year was played on a Saturday. I like Brady and all, but 3 games? Also 3 for the Giants/Green Bay? What garbage.

I would love to see Cincy in a Sunday or Monday night game every week. Otherwise, I really don’t give a crap who’s playing. Odds are the 2nd and 3rd time Dallas, NYG, GB, NE, Denver, Indy and Houston play, I’ll find something else to do.

None of those teams that you mentioned are ever contenders! Maybe after this season the Bengals will get a game or two because they are winning. No offense, but who the hell wants to watch the Raiders? The Raiders remind me of the Wildcats before Goldie coached the team…Carolina? How many games did they win? The Florida three..Miami, Tampa, Jacksonville…Hmm, how many games did Jacksonville win this year? They just lost the only player they have to a drug suspension. Miami might get a Sunday Night appearance next season if they keep up their good play….Tampa Bay…..Went through another Qb, huh? You’ll see KC get a Sunday game or two if they continue playing great ball like they are. Buffalo? aaaah, Buffalo, I don’t think they won more than 8 games since Jim Kelly was QB. The New York Jets have been playing good football. If they keep it up they may get a Sunday game next year. AZ, ST. Louis, Philly… Come on! You have to be a contender or win to get love! Yeah, Dallas has only won one playoff game in 16 years and have been an average 8-8 for the last couple of years but they are still in contention for a playoff spot at the end of the year. Buffalo, St Louis, Miami, Cincy, The Jets, Jacksonville, Tampa Bay, Oakland , AZ, Cleveland, Tennesee and Philly have been losing football teams! People want to watch contenders…People want to watch the best the NFL has to offer…If you want to watch these teams get the NFL Network and watch the Thursday games….lol! The people want to watch Manning v Brady on Sunday Night after a hard week of work not Who the hell are the QB’S of half the teams you mentioned? They change every week….LOL! Hope this answers your question….. Cincy, Miami, and the Jets are playing good football. Carolina is coming on…If they keep it up the rest of the season one of these teams will get a spot…

I to would like to Detroit Lions on Sunday nite and Monday nite football they have had the most explosive Ofense n NFL the past 2 Seasons.

Raiders will be on NBC Sunday night football soon