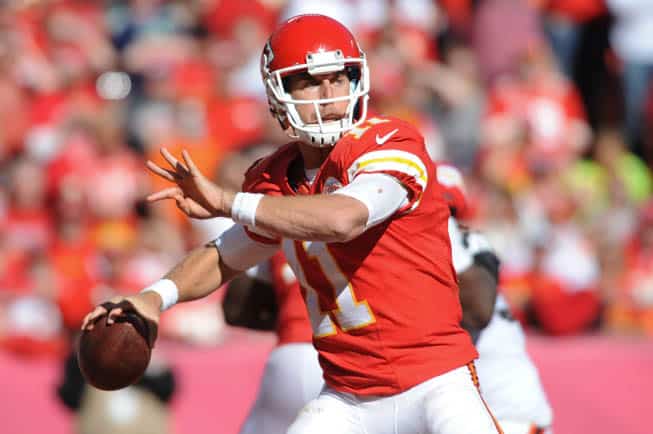 Two NFL games on the schedule for the week of Nov. 17, 2013 (Week 11) have been moved in accordance with the league’s flexible scheduling rules.

Kansas City at Denver, which was originally scheduled for 4:05pm ET on CBS, has been moved to the Sunday Night Football slot at 8:30pm ET on NBC.

The Peyton Manning led Denver Broncos are currently 7-1 overall and 1-0 in the AFC West. Kansas City (8-0, 1-0 AFC West) is the NFL’s only remaining undefeated team. The move puts two of the league’s best teams in a prime-time intra-division match-up.

Green Bay at the New York Giants was originally scheduled for Sunday Night Football on Nov. 17, but it has been moved to 4:25pm on FOX.

The Packers are having a good season so far at 5-2, but the Giants (2-6) have been disappointing.

The third game changed was San Diego at Miami. Originally slated for 1pm ET on CBS, it has been moved to 4:05pm ET on CBS.

This is a fairly surprising and significant development–KC/Denver was one of CBS’ protected games.

Hm… CBS must have unprotected it or something.

CBS gave it up in exchange for some (unannounced and possibly undetermined) future consideration. The thinking was that it was the late game in a singleheader week, meaning not many people would see it to begin with–it wasn’t like they were giving up a full- or nearly-full national game.

Different circumstances (pre-SNF to NBC), but undefeated Jets/Patriots showdown in 2004 was a 4:05 game (memory serves, Nantz and Simms did that one), exhibit A why that won’t happen again.

Matter of fact, I’m pretty sure Bengals/Chargers in 2009 (which CBS protected, leaving us with Vikings/Cards) was a 4:05 game, in which both teams were fighting for home field–that would probably be exhibit B:)

Why have schedules at all. Chiefs are overrated along with manning’s 1 supe bowl. Pack/giants are always Super Bowl winners & favorites. Dumb move, ratings will still be better pack/ giants, just watch.

The Giants are awful this year and are only in contention by virtue of playing in the NFC Tallest Midget division. You’re talking a potential 9-0 vs. 8-1 match-up, with Manning who is a ratings draw all by himself. Complete no-brainer to make the switch if possible.

Thank you for sharing an extreme minority opinion that probably less than 10 people in America would agree with.

The Chiefs WILL LOSE ON next Sunday!!!!

Look. I. played football when you play It don’t matter ass long ass you win this is not baseball with ears this is football you play not two run the score up you. play two win and that’s It