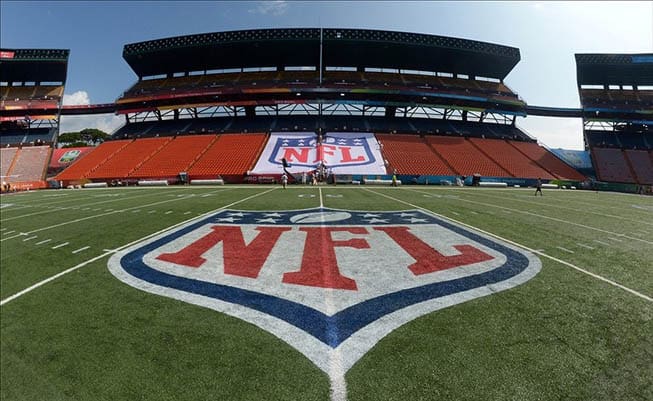 The 2013 NFL preseason schedule was released today and kicks off with Dallas vs. Miami in the Hall of Fame Game in Canton, Ohio on Sunday, Aug. 4 (8 p.m. ET, NBC).

Eleven other preseason games have already been scheduled for national television broadcasts, including Cincinnati at Atlanta, San Diego at Chicago, Tampa Bay at New England, Indianapolis at NY Giants, Pittsburgh at Washington, Carolina at Baltimore, Seattle at Green Bay, St. Louis at Denver, New Orleans at Houston, and Minnesota at San Francisco.

The full 2013 NFL Schedule with dates was is expected to be released on April 16. Opponents for every team have already been announced and are listed on each team’s 2013 schedule.

Listed below is the complete 2013 NFL preseason schedule. For games listed as “Local,” check your team’s 2013 schedule page for channel listings.

Ridiculous that the NFL makes you wait clear into mid April to announce the games for the upcoming season. It makes it hard to plan an away trip. If they already know way in advance then why make the public wait? Can anyone shed some light on to the waiting game?

The NFL always releases the schedule in mid-April. I believe setting the games for television is what takes so long. Plus NFL teams try to schedule around other events, such as MLB games or other events at their home venues.

I agree. I’m sure that they already know the schedules, so why don’t they let the fans know

These are preseason games. Nobody cares when they are played. They don’t matter.

Sam for those that live in igloo land (Canada) and travel over the boarder to catch an NFL game, it very much matters as to the dates of the games. Dah; obviously anybody travelling to catch a game appreciates the schedules — the sooner the better.

i m still waiting to see the eagles schedules !!!

I am a HUGE Seattle Seahawk fan, and I am ready to see their schedule. I am so excited at the momentum we had going last year and I have a good feeling this year will be even better. It is always great to see the schedule as far in advance as possible to plan going to a game or weekend get together’s themed to the game. Go Seattle!

Thanks for visiting the site. The 2013 Seattle schedule is now available and can be viewed here:

Sam even though these games don’t matter for Season Ticket holders, Every game matters. =)
I have to wait way to long for NFL season to start, so i am happy with any game I get to see.

I’m a 65-year old handicapped woman and football is my passion!! I go into withdrawals after the pro-bowl and only begin to come out in July when more and more news begins to come out about football. August and pre-season doesn’t come soon enough. I follow games using redzone, the most fun way to watch and keep up with all the games on Sunday. College football feeds me on Saturday. I’m from Georgia but love me some gators and Boise State!

Hi everyone , i’m from MOROCCO and i’m a huge fan of the san francisco 49ers, as u know all games are scheduled to be played at about 7,8 or 9 pm ET , ( 4 hours of difference , Casablanca Time) can u please help me out to find a link on which i can watch the recorded games ??? tnks

It will be soooo good to have something good to watch on TV for a change. TV has become a vast wasteland! Can’t hardly wait for football to start!

My husband and I can’t wait for football to start. We use to have season tickets tonDolphins before old age grounded us! Hooray for the big screen the kids gave us.

Everyone thinks san fran again Seattle texas Atlanta .saints will be better but watch out for …….

There is almost no game-planning in the preseason, so ‘unbalancing’ the schedule is more acceptable.

My husband is an Eagles fan and I, a Jets fan. Preseason or not…we are ready for some football.

Football feeds my husbands and I’s soul….. pre season and regular season hall of fame drills…. its all good. Just lets us know that our Commrads r Ready for Tailgatin gatherin bettin laughs screaming….. R u Ready For Sum Football? Bring it on, let da Rivalry begin all in good fun….. Get ur Game Face on Peeps ….

I’ve never been to a Bengals game. Been a fan for over 30 yrs. Glad when they come on Tv here. Doesn’t happen often living in Colts country

So ready for football preseason or not. GO VIKINGS!!!!!

Anybody know the Packers schedule ?

Im luvin it games galore….. we r feelin footballish. R U READY FOR SUM FOOTBALL ? Friends! NFL, COLLEGE and HIGH SKOL….. OK lets break out the Pit the chairs the Big Screen the tikkets the…… Um, u know what I mean ….. All we need now is the cooler weather to get in full swing….. Oh and drinks and party food… Dont forget ur Team Jerseys….. God Bless everyone ….. Gods watchin

The Texans will be a beast this year lets go texas

ARE YOU READY FOR SOME FOOTBALL??!!