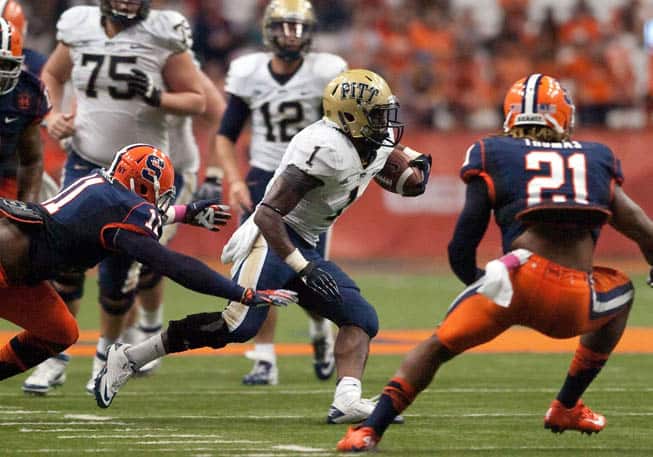 Conference realignment was in full swing last year, and today is the day when those moves became official for the 2013 football season.

Let’s take a look at each Football Bowl Subdivision conference and which teams have joined or moved on to greener pastures.

Pittsburgh and Syracuse both join the ACC today from the Big East, which as of today is known as the American Athletic Conference. Pitt was placed in the Coastal Division of the ACC while Syracuse was placed in the Atlantic. Here are the updated ACC divisions:

As we mentioned, the old Big East is now known as the American Athletic Conference. They prefer to use “The American” as their brand name rather than the abbreviation AAC.

Pittsburgh and Syracuse have left what was the Big East for the ACC. Houston, Memphis, SMU, and UCF all join The American from Conference USA. Here are the ten American Athletic Conference teams for the 2013 season:

The Big Ten neither adds or loses members for the 2013 season. In 2014, they will add Maryland and Rutgers. At that time, they will realign into new East-West divisions.

Conference USA has the most changes in 2013 with four members leaving and six coming in. Florida Atlantic, Florida International, Middle Tennessee, and North Texas move over from the Sun Belt while Louisiana Tech and UTSA leave behind the now defunct WAC. Houston, Memphis, SMU, and UCF each left for The American. Here are the updated C-USA divisions for 2013:

Although not technically a conference, two teams are now FBS Independents. Idaho and New Mexico State were the only two WAC teams that couldn’t find a conference to join in 2013. They will each be Independent for only one season before joining the Sun Belt Conference in 2014.

The MAC neither adds or loses members for the 2013 season. They currently have 13 members and appear to be content with that number.

The Mountain West adds San Jose State and Utah State and was able to retain Boise State and San Diego State. Those two were headed for the Big East but later opted to stay with the MWC. Listed below is the new alignment for the Mountain West Conference, which will hold its first championship game on Dec. 7:

The Pac-12 neither adds or loses members for the 2013 season.

The SEC neither adds or loses members for the 2013 season.

The Sun Belt is the only conference to add less members (2) than they lost (4) for the 2013 season. Georgia State is now a full member of the SBC after their transition from the FCS. Texas State joins the conference from the WAC, which no longer sponsors football.

With only eight members in 2013, each SBC schools plays a five-game non-conference football schedule. Here are the eight Sun Belt members for 2013:

I couldn’t agree more. This makes my head hurt.

don’t know why NMSU would’ve stayed indy when the SunBelt could have used the perfect number for a true round robin season schedule, 9….

There join next year for football only. They originally left because the WAC was considered a better football conference then the sun belt was at the time.

Poor WAC, but someone was going to get left in the dust. Interesting that it turned out to be them and not someone like the Sun Belt.

WAC is still alive for other sports, just not enough football schools.

The WAC is alive for other sports, but it is not well. They did pull UMKC from the Summit League, which is a good sign.

The University of Who cares located in Nowwheresville would be an excellent candidate for the WAC and a perfect fit.

W: What
A: Awful
C: Conference

Colorado State and Utah State need to join the PAC in all sports to do well. So much more money would be made. Rivalry games would be eaisier to schedule, and they coluld schedule the PAC championship game at an NFL stadium such as Denver. The two teams would have more competition and more motivation to do well.

True, and I should marry Kate Moss. Only problem is Kate and the Pac-12 just aren’t all that interested.

@Herm, lol’d. You are spot on though. The Pac-10 expanded to 12 to land the TV deal. They got their TV deal, now they’re content to roll around in the huge pile of cash. No need to share it with more schools.

NMSU should also join the Mountain West for the same reason.

This is a little bit more realistic, NMSU and Idaho would be reasonable fits in the Mt. West. If they had gotten in the door before SDSU and Boise State did their about-face from the move to the Big East, it would not have surprised me.

@Herm
They weren’t invite to the conference the Mt west wanted the 2 spots for SDSU and Boise. They were betting on them coming back. NMSU and Idaho were the worst case scenario for them.

@ Biggs
That is true. However the Mountain West could still see fit to absorb NMSU and Idaho and expand to 14 teams. I guess those schools are joining the Sun Belt Conference, but the Mountain West would be a better geographic fit for both of them, and probably better for continuing historical rivalries as well. And they are both strong enough programs to be reasonably competitive at the Mountain West level.

Does anyone know if the Sun Belt is targeting another FCS school to get to twelve?

Idaho in the Pac-12? You have got to be kidding, they couldn’t win consistently in the WAC. When they grow up maybe they will be able to get into the Mountain West, but as for the Pac-12 I wouldn’t hold your breath. I think the issue with Notre Dame and BYU staying independent is largely due to their status as religious schools. But the real reason independent status works well for both of them is the prestige of both programs…tradition, history of National Championships, Heisman Trophy winners, future Super Bowl MVP’s, etc…neither one has any problem scheduling quality opponents, so they do not feel pressure to join a conference.

Anybody know the latest news on the lawsuit between Boise State and the AAC/Big East? BSU never should have gotten themselves into that pickle, San Diego State was a lot smarter in how they went about it. Getting yourself sued by a conference is not the best way to save money for a stadium upgrade.

here is what I want to see. I want to see Boise state and byu join the pac-12 and then make it the pac-14. And I also want to see connecticut and cincinnati join the acc and that makes the acc 16 teams and I think it will be the first conference to go to 16 teams. And that is what I think what will happen in the future. And plus Byu is not going to join the big 12 in my opinion.

Based on geography, I certainly understand your the logic of your opinion. However, geography is not the primary basis for conference realignment.

Boise State is a fine program. However, it is located in a sparsely populated state (as reflected by its 37,000 seat stadium). Unless the population of Idaho jumps up tremendously, Boise State will never be invited to the Pac-12. They don’t add enough to even make up for the share of the pie that they would take.

BYU is a closer call. However, how much does BYU add TV wise since Utah is already a member of the Pac-12? Not much

I don’t see the Pac-12 expanding anytime soon, if ever (that’s a bold statement in this day and age). If they ever did, it would most like be for a Texas – Texas Tech – Oklahoma – Oklahoma State combo and even that’s a long shot.

I forgot to mention, Cincinnati and Connecticut to the ACC is a real possibility but not for sometime. The ACC probably wants to see how the 14 team league works first. The main argument against a 16 team league is that a lot of traditional rivalries would be lost. (Not that that has prevented expansion in the past).

Instead of having all these conferences, we should just dismiss all conferences and make all 120+ football programs be independent. Easy solution!