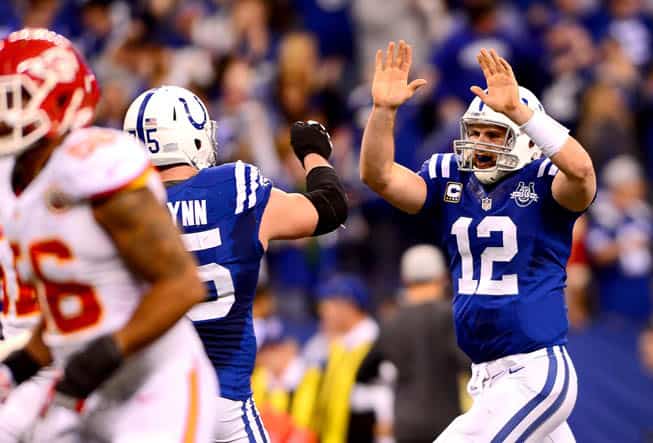 The 2013-14 NFL Playoffs kicked off on Saturday with AFC and NFC Wild-Card games.

In the AFC, the 4th seed Indianapolis Colts rallied from a 28-point deficit to defeat the fifth seed Kansas City Chiefs 45-44.

Indianapolis was led by quarterback Andrew Luck, who threw three of his four touchdown passes in the second half, including the game-winner of 64 yards to T.Y. Hilton with just over four minutes remaining in the game. Luck also picked up a fumble by the Colts’ Eric Berry and returned it five yards for a TD.

Next week, the Colts will travel to face either the Denver Broncos (if the Bengals win today) or the New England Patriots (if the Chargers win today) in the Divisional Round.

In the NFC, the 6th seed New Orleans Saints went on the road and upset the 3rd seed Philadelphia Eagles. On the final play of the game, Saints kicker Shayne Graham connected on a 32-yard field goal to give them the upset and their first ever road win in the Playoffs.

Since New Orleans is the 6th seed, they will play at the Seattle Seahawks in the Divisional Round. That game is set for Saturday, Jan. 11 at 4:35pm ET on FOX.

Gooo colts need s.d to win 2day nd it will be a definate rematch manning vs luck that will be a true championship for the books