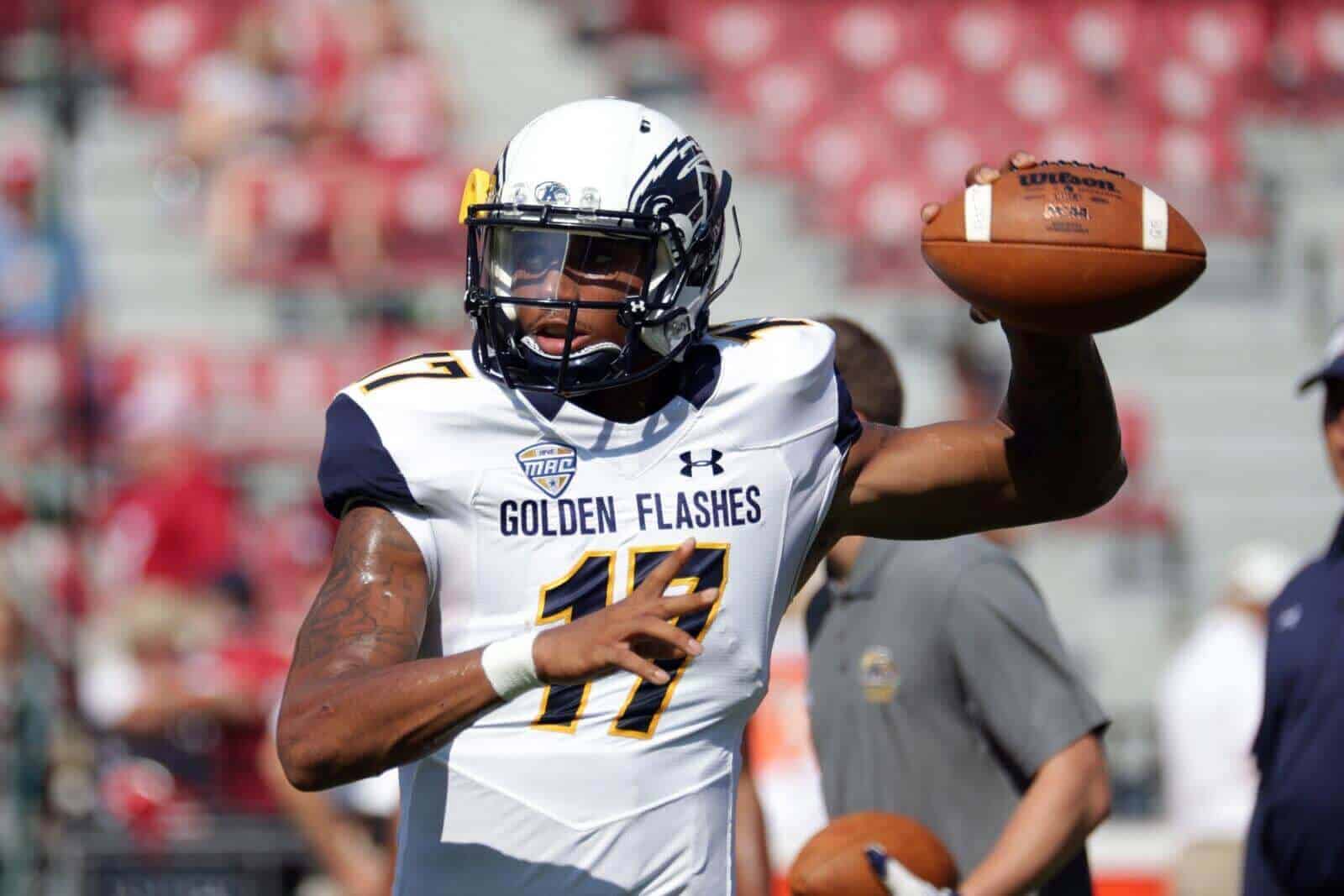 Last week we highlighted the four college football programs with the longest homestands in the nation, this week we look at the opposite scenario.

While 91% of FBS programs have at least six home games scheduled in 2017, the following 12 have only five. They represent the bottom 8% of the barrel.

The imbalance in each case is in the non-conference schedule – where every team plays three of its four non-league games on the road. Add in the four home and four away games from the conference slate and you get five home dates and seven road trips.

It’s no coincidence that none of the teams mentioned are from the five Power conferences. The MAC and the Sun Belt – often considered the two weakest leagues – are tied for the most members on the list with four apiece.

Bowling Green plays Michigan State, Northwestern, and Middle Tennessee on the road in 2017. That leaves FCS South Dakota as the only non-conference home game. It’s also the only home date during the first four weeks of the season.

The Falcons also had only five homers in 2015. The difference that year was the opener vs. Tennessee, which was technically a neutral game despite the fact it was played in Nashville. It gave BGSU six true away games vs. the seven it draws this season.

CMU scheduled a mere five home dates as recently as 2013. It’s no coincidence that the ‘13 team is also the only Chippewa squad since 2012 that didn’t achieve bowl eligibility.

Eastern Michigan opens-up its 2017 season by hosting Charlotte from Conference USA. In Week 2 it sets off for Rutgers followed by a bye in Week 3 and a home date with Ohio in Week 4. Weeks 5-7 are all road games: at Kentucky, at Toledo, and at Army.

The Eagles’ got slapped with a similar scenario in 2014 when they scheduled five home games, six away, and then one at UMass’ off-campus at Gillette Stadium in Foxborough. Included in the fun were four straight roadies from Sept. 6 – Oct. 4; at Florida, at Old Dominion, at (11) Michigan State, and at Akron. EMU lost all four games in the stretch and finished 2-10. The only wins were at home.

With the exception of FCS New Hampshire, Georgia Southern plays the entirety of its non-Sun Belt schedule on the road; at Auburn, at Indiana, and at UMass.

The Eagles joined the FBS ranks in 2014 and have only played more than five home games once since – in 2015 when played six in Paulson Stadium and finished 9-4. It’s no coincidence that it’s also the only team in program history to make it to a bowl game.

Kent State has its work cut out for it in non-league road play; at Clemson, at Marshall, and at Louisville. That leaves FCS Howard, in Week 2, as it’s only non-MAC home game.

It’s the first time the Golden Flashes have only five home games slated since 2013. Before that it was 2012, a program-record 11-3 finish that included a mention at No. 18 in the AP and a narrow loss to (19) Northern Illinois in the MAC title game.

It’s the first time the Ragin’ Cajuns double-up on SEC opponents since 2010 when it lost to both Georgia and Ole Miss on the road.

After road trips to Oklahoma and Auburn last year, in 2017 the Warhawks visit Florida State and make a return trip to Auburn. The balance of the non-Sun Belt slate is a visit to Memphis and a lone home game vs. Southern Miss.

Unlike the other teams listed, ULM has a long-history of playing fewer games at home. The last time it scheduled six at Malone Stadium was 15 years ago in 2002. In 2004 and 2006 the Warhawks played just four home games.

The sole American Athletic program on our list, Navy has five home games, six away, and then it’s traditional season-finisher with Army in Philadelphia. The only non-conference contest in front of the home crowd comes in Week 6 when Air Force visits.

The Midshipmen were short on home dates as recently as 2014 when played five in Annapolis, four true road games, and a whopping three neutrally-sited games; Ohio State (in Baltimore), Notre Dame (in Landover), and Army (also in Baltimore).

New Mexico State gets Arizona State, New Mexico, and Arkansas on the road and then hosts UTEP. No stranger to the home-light plan, the Aggies have played just five games in Las Cruces every season since 2014.

One of two Conference USA members mentioned, Rice kicks off it’s 2017 season early, on August 26, with a game vs. Stanford in Sydney, Australia. The balance of its non-league slate features visits to Houston (a five-mile drive across town) and Pittsburgh. That leaves a home date with Army on Oct. 7.

The last time the Owls played so few games at Rice Stadium was 2014 when they opened-up with back-to-back road dates at (17) Notre Dame and at (7) Texas A&M. Though they dropped those two games, they went on to finish 8-5. That’s also exactly how many combined wins they’ve enjoyed in the two seasons since.

Playing as an independent for the second-consecutive season, UMass has five games slated at home in Amherst, six road dates, and a neutral-site game with FCS Maine at Fenway Park in Boston.

Despite playing four straight home games from Sept. 10 to Oct. 1 last season, the Minutemen finished 2-10.  The last time they scheduled so few home games was in 2014 when as MAC members they played a mere three at home, six on the road, and three neutral games.

What’s unique about UTEP’s non-conference schedule is that its sole home game is against a Power opponent, Arizona. That leaves Oklahoma, New Mexico State, and Army as road dates.

The Miners played a whopping seven games in El Paso last season, posting a 3-4 record in the Sun Bowl and a 4-8 finish overall. A year prior to that, in 2015, they played just five games at home, earning a 3-2 record at home and a 5-7 mark for the season.

I wish the NCAA would crack down on this. P5 schools should not be allowed to have 7-8 home games a year. They also have a tendency of promosing schools to play at their stadium and then pulling out. Case in point: South Carolina’s recent abandonment of their game at East Carolina.

Regarding Georgia Southern: “It’s no coincidence that it’s also the only team in program history to make it to a bowl game.”

Coincidence you say? Only team in program history you say? Please put a little more thought and research into these pieces.

The next year (2015), the Eagles were yet again bowl eligible and destroyed the 10-win MAC Champion, Bowling Green, in the GoDaddy Bowl.

In 2016, Georgia Southern was forced to hire a new head coach who has been nothing short of fecal matter. Coach Summers went 5-7…the 3rd or 4th losing season in Georgia Southern history! Needless to say, Summers is on the hot seat in 2017.

Point being, you act as if Georgia Southern has decades of bowl games under their belt. Per the NCAA, the Eagles have had TWO opportunities to play in bowl games (2015 & 2016) and are 1-1 in those two years.

“Please put a little more thought and research into these pieces.”

Easy buddy. So one statement was a little off. You read the piece, you don’t think she put “thought” and “research” into this?

My apologies for the rant. I am very familiar with this website and the associated articles and I can comfortably say that when it comes to the Group of Five, the staff does not do a lot of research. We’re talking about 50% of the CFP members…just gets old seeing frequent mistakes (yes, this specific instance is minimal/trivial) but I’ll contain myself. Thank you for the work you do.

No problem, thanks for reading. Amy researches a lot of stats for her pieces, much more than you’re likely to see from me. :)

We are aware of both but considered them as neutral for this piece. Thanks for reading.