The 11 Longest Non-Conference Road Trips in 2016 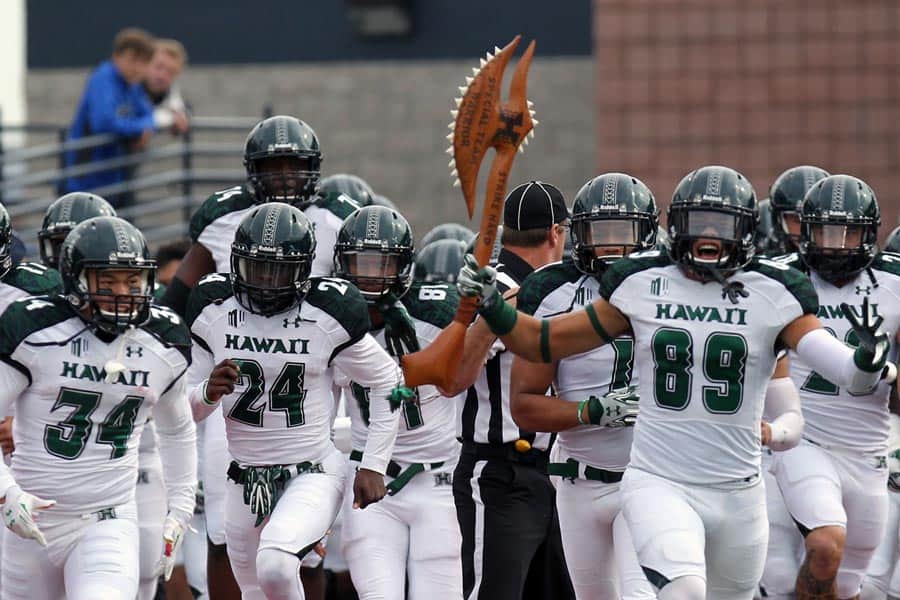 Is jet lag a factor in sports?

According to research cited by The Economist, “the deterioration in motor function of athletes after long trips lingered for roughly as many days as the number of time zones they crossed.” The article, entitled “Road Warriors” provides actual hard data for jet lag vs. results for Major League Baseball, the National Football League, and even Rugby.

With teams hailing from coast-to-coast, college football isn’t immune to the physical costs of travel. And, as is the case with so many caveats of scheduling, some teams will suffer more than others.

Take a look at the 11 most brutal non-conference travel itineraries in 2016. Each of the outbound teams will be playing at a disadvantage that’s dependent on the length of their specific trip and the number of days they’re afforded to adjust their body clocks.

What didn’t make our list is the clash between Georgia Tech and Boston College (an ACC conference game) in Dublin, Ireland.

Also, Army, BYU, Notre Dame, and UMass road games are not included (if applicable) because they aren’t in conferences.

The Broncos’ 2016 road opener is actually shorter, by some 400 miles, than the trip they took last season to play Virginia in Charlottesville. They beat the Cavaliers 56-14.

The last time Boise State played a game in the state of Louisiana was in 2009, when it traveled to Ruston and beat Louisiana Tech 45-35.

Boise State and UL Lafayette have met only once previously, a 2014 game in Boise, the Broncos won 34-9.

Another Mountain West team visiting a MAC opponent in Week 3, San Diego State ventured even farther last season when they trekked to Penn State (2,546 miles) for a 37-21 loss.

The Aztecs’ most recent visit to the state of Illinois was in 1999, when they lost 38-10 to Illinois in Champaign.

San Diego State and Northern Illinois have met four times previously, a home-and-home series in 1967-68 and 1970-71, all wins for the Aztecs.

The Rebels traveled to a MAC school as recently as last year, when they opened up with a 38-30 loss at Northern Illinois. That trip was 305 miles shorter than this year’s journey.

The last time UNLV played in the state of Michigan was also in 2015, a 1,971 mile trek to Ann Arbor which resulted in a 28-7 loss to the Wolverines.

UNLV and Central Michigan have met four times previously, all from 1993 to 2013. The Rebels hold a 3-1 all-time advantage, the only loss coming in their only-ever game in Mt. Pleasant in 1994.

Nevada will make the long trek to Indiana to square off with Power Five opponents in both Week two and Week four. It last visited the state in 2009, when it opened up with a 35-0 loss to Notre Dame. The last time it played a Big Ten school was in 2007, a narrow 36-31 defeat at Northwestern.

The 2009 meeting was Nevada’s only-ever action vs. the Irish and it has never played Purdue.

These two teams travel across country each year to face each other, making Stanford-Notre Dame the longest-distance, non-conference annual rivalry in the nation.

The Cardinal visited the Midwest as recently as last season, when it opened up with a 16-6 loss at Northwestern. In 2013, they journeyed even further—716 miles to be exact—to pick up a 34-20 win over Army at West Point, NY.

Notre Dame and Stanford have met 30 times previously. The series kicked off in 1925 and has been played consecutively since 1997. The Irish hold a 19-11 all-time advantage and are 12-3 at home.

Though not quite as far as this year’s big road trip, Fresno State trekked 1,705 miles to Ole Miss last season. That ended in a lopsided 73-21 loss.

The last time the Bulldogs played a MAC opponent was Northern Illinois in the 2010 Humanitarian Bowl, a 40-17 loss. Their most recent trip to Ohio came the previous year, in 2009, the front end of home-and-home series with Cincinnati, another loss.

Fresno State and Toledo have met twice previously, 2008 in Toledo and 2005 in Fresno, both wins for the Bulldogs.

Last year it was Nevada that traipsed across the continent to visit Buffalo, this year it’s the Bulls turn.

The only other time Buffalo has visited the state of Nevada was in 2004, when it played the Wolf Pack in Reno and lost 38-13.

The Bulls are 0-2 all-time vs. Nevada and 0-3 all-time vs. the current Mountain West, losing to San Diego State in the 2013 Idaho Potato Bowl.

After traveling all the way to Los Angeles to lose to UCLA last season, this year Virginia tacks on 266 miles to its travel log to play the Ducks.

It’s the first time the Cavaliers have ever played a game in the state of Oregon.

Edging Virginia-Oregon by a mere 62 miles, Rutgers-Washington earns honors as the longest non-conference road trip in 2016 where travel is completely within the 48 contiguous states.

Rutgers visited the state of Washington—and Seattle—as recently as 2014, when it beat Washington State 41-38 in the season opener at CenturyLink Field, home of the Seattle Seahawks.

The Scarlet Knights and Huskies have never met previously on the gridiron.

Given its location off the mainland, Hawaii is college football’s most frequent flier. Last year, it visited Ohio State (4,500 miles) and Wisconsin (4,152 miles), both in September.

1. Cal vs. Hawaii in Australia

College football’s most unusual venue in 2016, Cal and Hawaii are set to kick off the season in Australia the weekend before the rest of the nation sees action.

The Golden Bears visited Maryland in 2008 (2,804 miles), but this year’s trip is nearly three times longer than that cross-country jaunt.

That aside, this isn’t Cal’s first international rodeo. Back in November of 1987, the Golden Bears journeyed 5,139 miles to Tokyo, Japan to tie Washington State 17-17 in the Coca-Cola Classic.

That was the same year that college football last went “down under,” where BYU edged Colorado State 30-26 in December of 1987 in Melbourne.

Very interesting. I guess GT-BC was left out because it’s a conference game. I think Hawaii also played Michigan in the late 90s, too, if I’m not mistaken.

Yes, GT-BC left out was stated in the article.

they are both from the acc

Do anybody remember when San Diego St and Boise St wanted to join the Big East. What a disaster that would of been.

Although it’s not on the list because the road team is independent, UMass @ Hawaii is 5,017 miles… and it isn’t even the longest road trip involving Hawaii this year!