The 10 Most Improved College Football Teams Through Week 8 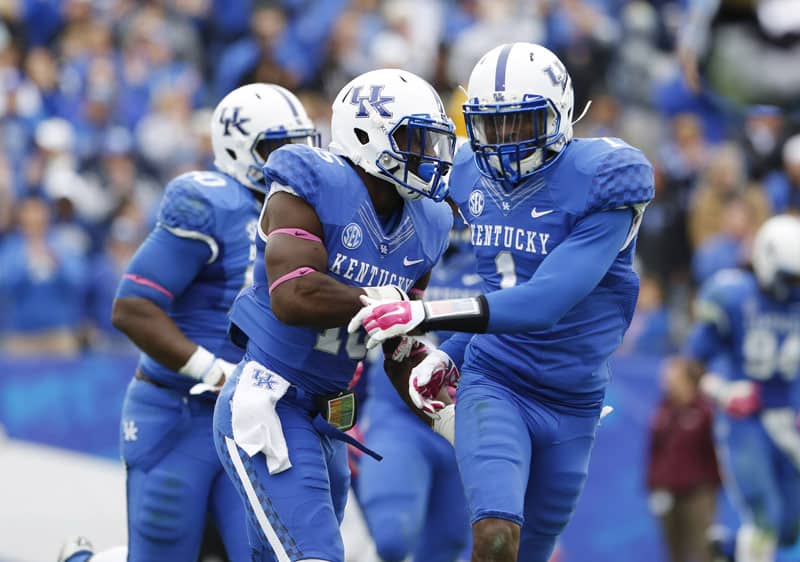 It’s time to honor a handful of college football programs, teams that finished last season under the .500 mark but have posted a winning record thus far in 2014.

These are the most improved squads in the game, an achievement that warrants the respect of the nation, regardless of who you root for.

Though these 10 teams may not make it to the College Football Playoff, they are collectively moving in the right direction.

Despite dropping four straight, NC State has already won more games this season than it did all of last year. What’s remaining on the Wolfpack to-do list in 2014 is winning its first ACC game since beating Boston College in the 2012 finale. NC State has dropped 12 consecutive conference games since then and has Syracuse, Georgia Tech, Wake Forest and North Carolina left on tap this season.

Not only have the Mountaineers surpassed their win total from last season, they’ve improved their record in Big 12 play from 2-7 to 3-1. Sure, West Virginia still has Oklahoma State, TCU, Texas, K-State and Iowa State left to play, but it is also only three wins away from posting its best record since it moved to the Big 12 in 2012.

How good is UAB’s 4-3 start under first-year head coach Bill Clark? Well, not only is it the best beginning to a season since 2005, it’s the first time the program has been over the .500 mark in nine seasons. With games remaining at Arkansas, at Florida Atlantic, vs. Louisiana Tech, vs. Marshall and at Southern Miss, the Blazers are two wins away from being bowl eligible for the first time since 2004.

Virginia’s already two wins beyond its total output from year and with two conference victories, it’s matched the number of ACC wins it posted over the last two seasons. The Cavaliers’ Week 3 win over No. 21 Louisville was their first victory over a ranked foe since shocking No. 23 Florida State at the end of the 2011 season. Virginia has to find two wins in its final five games (North Carolina, Georgia Tech, Florida State, Miami Fla. and Virginia Tech) to earn its first bowl bid since ascending to the Chick-fil-A Bowl in 2011.

Second-year head coach P.J. Fleck—at 33 the youngest head coach in the FBS ranks—has Western Michigan out to its best start since 2011. The Broncos’ Week 3 win over Idaho was their first win over a non-conference team since beating UConn in 2012 and their back-to-back road wins at Ball State and at Bowling Green are the first consecutive road victories since 2003. Standing between WMU and its first bowl bid since 2011 are games with Ohio , Miami (Ohio), Eastern Michigan, Central Michigan and Northern Illinois.

Before beating Northwestern in the season opener, Cal hadn’t won a non-conference game over a power-five team since beating Colorado in 2010, the year before the Buffs moved from the Big 12 to the Pac-12. The Golden Bears’ four wins in 2014 equals the total number of victories they posted from 2012-13 and puts it two games from going bowling for the first time since 2011. Cal may have the toughest road to the postseason of any of our most improved honorees: Oregon, Oregon State, USC, Stanford and BYU.

After finishing last year 4-8 overall and 2-7 in Big 12 play, TCU is off to a 5-1 start including a 2-1 record in conference action. As good as the Horned Frogs look, the run is eerily reminiscent of 2012—their first year in the conference—when they won five of their first six only to go 2-4 down the stretch to finish 7-6. The only difference is, this year they’ve bested two top 15 teams while two years ago they didn’t face a ranked team until the seventh game, when they fell 56-53 to No. 18 Texas Tech in triple overtime. TCU will have to find two wins in its final six games (Texas Tech, West Virginia, K-State, Kansas, Texas and Iowa State) to hit the bowl circuit for the first time since 2012.

Even though Temple is only three seasons removed from going 9-4 (in 2011), remember that the Owls moved from the MAC to the Big East in 2012, slashing their win total to four in 2012 and to two in 2013. This season Temple has scored back-to-back wins over Big East/AAC teams for the first time since 2012 and are two wins from bowl eligibility. The Owls have games at UCF, vs. East Carolina, vs. Memphis, at Penn State, vs. Cincinnati and at Tulane remaining, making their first postseason appearance since 2011 anything but a sure thing.

After winning nine games in 2010, seven in 2011 and six in 2012, Air Force dropped to 2-10 last year, its worst finish since 1980. This season it’s won five of its first seven for the first time since 2008. The Falcons were bowl eligible as recently as 2012, but haven’t won in the postseason since beating Georgia Tech 14-7 in the 2010 Independence Bowl. To get back into the action, Air Force will need to find at least one win—either at Army, at UNLV, vs. Nevada, at San Diego State or vs. Colorado State.

Tied with Air Force for the biggest turnaround from last year, Kentucky has already won more games this season than it did from 2012-13 when it went 4-20. Back-to-back wins over Vanderbilt and South Carolina in Weeks 5 and 6 mark the first time the Wildcats have won consecutive games against SEC foes since 2009 when it knocked off Vandy and Georgia. Overall, its Kentucky’s best start since 2008 when it won five of its first seven before going 2-4 down the stretch for a 7-6 finish. That was also the last year the Wildcats won a bowl game, a Liberty Bowl victory over East Carolina. This year, it’s Mississippi State, Missouri, Georgia, Tennessee and Louisville standing between Kentucky and its first bowl game in four seasons.

I’d say Purdue would be just outside this Top 10. Admittedly their win/loss pct. gain is modest (1-11 in 2013; 3-5 thus far in 2014), but they have been consistently much more competitive and have avoided major blowouts this season against the better teams on their schedule.

Regular season last year, Mississippi State was 6-6. Their wins were over Alcorn, Troy, BGSU, last year’s Kentucky, and two lucky overtime wins over Arkansas then Ole Miss. A bowl win against Rice was like nothing. Look where they are now. I think Miss State should be at the top of the ‘most improved’ list, in general… but even mathematically, how do they miss being on this list? They’ve gone from a .500 regular season to 1.000. That’s a “50%” gain by how you’re subtracting percentages. If you throw in the Rice offering, they’re still up 46.2%.

But yes, I know you were compiling a list of “Most Improved Losers”…. the title is just deceptive. But still, a .500 regular season that includes two miracle wins, an FCS win, and a win over one of the worst FBS programs, Troy…. was pretty stanky.