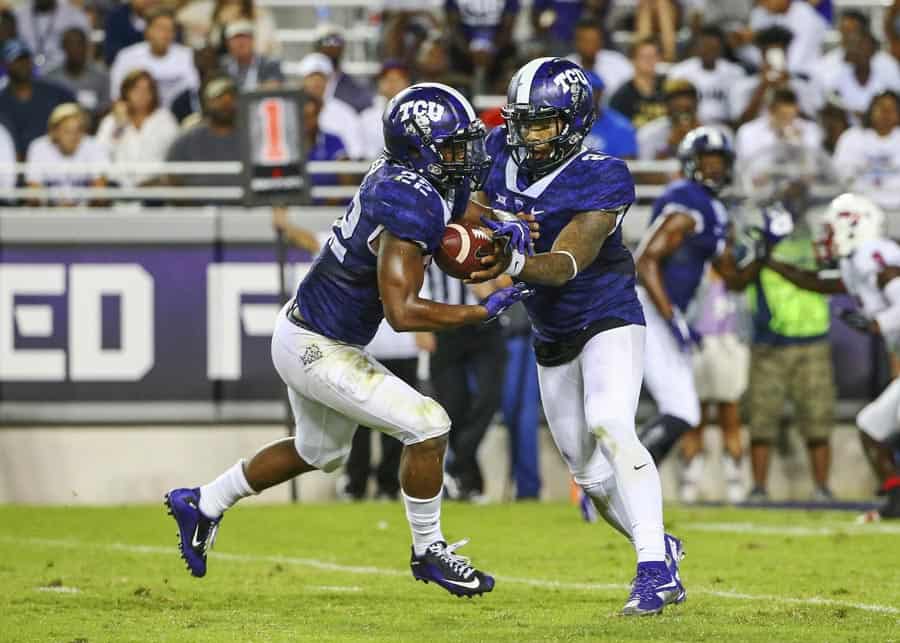 It’s been at least 30 years since the following programs lined up against each other on the gridiron.

Of the ten matchups, five include two Power programs, one is a conference game, and one is an in-state showdown. Both Mississippi State and Ohio State have two reunions to attend this season, giving the SEC and Big Ten a tie for the most members mentioned with four apiece.

The only conferences not included are the ACC and Conference USA.

If absence makes the heart grow fonder, these pairings are long overdue for a big, sloppy pregame hug.

It’s been 31-years since the Ragin’ Cajuns and Bulldogs played. Mississippi State won 31-3 in Starkville, one of only four wins in a 4-7 campaign. For Louisiana, then playing as an independent, it was the first game in a 6-5 season which also included losses at Oklahoma State, at Alabama, and at Ole Miss.

Michigan State and Arizona State’s only-ever history came via a home-and-home series played in 1985 (in East Lansing) and 1986 (in Tempe). The home team won on both occasions.

1985 was also the season that Spartan sophomore running back Lorenzo White became the first Big Ten rusher to gain 2,000 yards in a season. He finished fourth in the Heisman vote that year and went to the Houston Oilers as the 22nd overall pick in the 1988 NFL Draft.

The two schools will also play in 2019, this time in East Lansing.

The Beavers and Buckeyes have met twice in history, both times in Columbus, both wins for the home team.

The 1984 game kicked off a 9-3 season for Ohio State and a 2-9 campaign for Oregon State. It was the Buckeyes’ 18th straight winning season vs. the Beavers’ 14th consecutive losing mark. The only-other action between the two came in Week 2 of 1974, the first of Ohio State running back Archie Griffin’s two Heisman winning seasons.

The Bearcats hold a narrow 24-23-4 all-time lead and have won seven of the last eight. The two also have a date booked in 2021, this time in Athens.

Mississippi State and Kansas State played a home-and-home in 1974 and 1977, the Bulldogs winning on each occasion. It’s the only time the two have met in football.

The ’74 Wildcats were led by senior quarterback Steve Grogan. He went on to enjoy a 16-year career in the NFL with New England where he played the final three quarters of Super Bowl XX in 1986 vs. the Chicago Bears. Though the Patriots lost 46-10, the fourth quarter touchdown pass from Grogan to Irving Fryar was the only TD scored on the Bears in that season’s playoffs.

The two will play again in 2019 in Starkville.

Ironically, in the only two seasons were they didn’t beat TCU, the Buckeyes went on to win a national championship. In 1957, OSU reeled off nine straight wins after falling in the opener to the Horned Frogs and won it’s second-ever national title. Four years later, in 1961 they opened with a tie vs. TCU, won the next eight straight and were named the national champions after blasting Michigan 50-20 in the season finale.

It’s been 55 years since the Mustangs and Wolverines played, a regular-season game in Ann Arbor which Michigan won 27-16.

The win was one of only three for UM that season, the balance coming vs. Northwestern and at (2) Illinois. Though the 1962 and 1963 Michigan teams combined for 5-11-2 record, they set the program up for a glorious 9-1 run in 1964, including a Big Ten title and a No. 4 finish in the final AP Poll.

The ’64 Mustangs went 4-6 in the regular-season, but still managed a Sun Bowl appearance where they lost 21-14 to Oregon.

The ’46 Army team went 9-0-1 and finished No. 2 in the final AP. The sole misstep was a 0-0 tie vs. Notre Dame. The Irish, which also went 9-0-1 were eventually awarded the national championship. What the Black Knights’ did receive was the Heisman Trophy, presented to back Glenn Davis who received 792 votes vs. third-place finisher and Irish quarterback Johnny Lujack’s 379.

Oklahoma and Army are scheduled to meet again in 2020, this time in West Point, New York.

The only time in history that Wyoming and New Mexico State have met in football was 64 years ago in Laramie. The 47-0 Cowboy win means that the Aggies have never scored a single point vs. Wyoming.

The two also have a date booked in 2024 in Laramie.

The Wildcats and Aggies haven’t met since a closely contested home-and-home in 1952 and 1953. Bear Bryant was Kentucky’s head coach for both games, just before he left Lexington to become Texas A&M’s head man from 1954-57.

Kentucky won the first meeting 10-7 in College Station and Texas A&M won the second 7-6 in Lexington. The ’53 Wildcats bounced back from their loss in the opener to the Aggies and finished the season with six-straight wins and a 7-2-1 record. Their No. 16 rank in the final AP, the fifth-consecutive under Bryant, would be their last postseason ranking until 1976.

The two are slated to meet again in 2025 in Lexington.

And to think TAMU and Kentucky are playing a conference game and have been conference members since 2012 – 6 years ago. Cheats fans and players with the unequal SEC scheduling matrix.

They won’t even play at Kentucky until 13 years after A&M joined the conference. The SEC needs to fix that somehow.

As long as they play 8 conference games and there’s only one rotational crossover game, it’s gonna be more of the same mess. Blame this on the need to keep what are now inter-divisional rivalries (Alabama/Tennessee and Georgia/Auburn) going.

When will LSU again play Tulane, a rivalry that datesback to 1893 ?

Wow what a joke A&M and UK are in the same conference and haven’t played eachother yet. I know it’s only been 6 years, but that’s still ridiculous.

You would have to get rid of the divisions though, and the conference championship game is only played if #1 and #2 didn’t play eachother.

This is what happens when you have Mega-Conferences……was not a problem 50 years ago (except when the SEC at first played only six Conf. games while having 10 members…)

Except maybe for the alumni of Cincinatti and Ohio University people have really not been awaiting these rivalries. Not that many of them will not be good games, but this not teams that close to each other who just do not play each other. TCU vs Ohio State .hopefully will be a Top 10 Matchup like it would have been the last few years, but I would not call it a reunion.

Georgia and TAMU will play as conference members for the first time next year….7 years after TAMU joined the SEC. Cheats fans and players.

I’m still thinking this through a bit, but at this point my initial reaction to the “they’ve been in the conference how long and not played each other?!” thing with A&M and Kentucky is… who cares? Yeah, I get it’s probably an unpopular opinion on here. But if you were to ask me which is a bigger deal: two teams with no history barely playing each other unless they make it to the conference championship game… or the ending of another long term rivalry (like some of the cross-divisional SEC games), I’d probably side with the latter.

The easiest solution to the crazy wait between games for these teams would be to add one more conference game, but we know that some fans will suggest that somehow they’d rather see 3 cupcake home games than make that happen because it’s easier than making constructive criticism against their team.

But yeah, I think the bigger issue was the breaking of incredibly longstanding series with Texas Tech, Baylor, and Texas. Or Mizzou and Kansas. Or WVU and Pitt. Or Nebraska and Oklahoma. I understand why those things happened, to some extent of another, but least there’s some substance to those series and whether or not they’re played. I’m not sure anyone was really eagerly anticipating these two new conference foes meeting up, including a lot of the fans of those two teams.

It has been suggested elsewhere that you break the SEC into 4 groups (2 of 3 teams, 2 of 4 teams) and alternate which big and small groups are paired. This way you play 3 annual rivals and then the other 10 teams twice every 4 years (not twice every 12 as is the case now).

Here is an oddity. Oregon State, known as OSU in the Pac-12 will play at Ohio State or OSU in the Big 10 this season. Then next year they play a home and away series with Oklahoma State, or known as OSU here in Big 12 country. I thought that might make a little light of all this serious SEC Kentucky-A&M discussion that is going on here so far.

Divisions DO need to be scrapped!!!