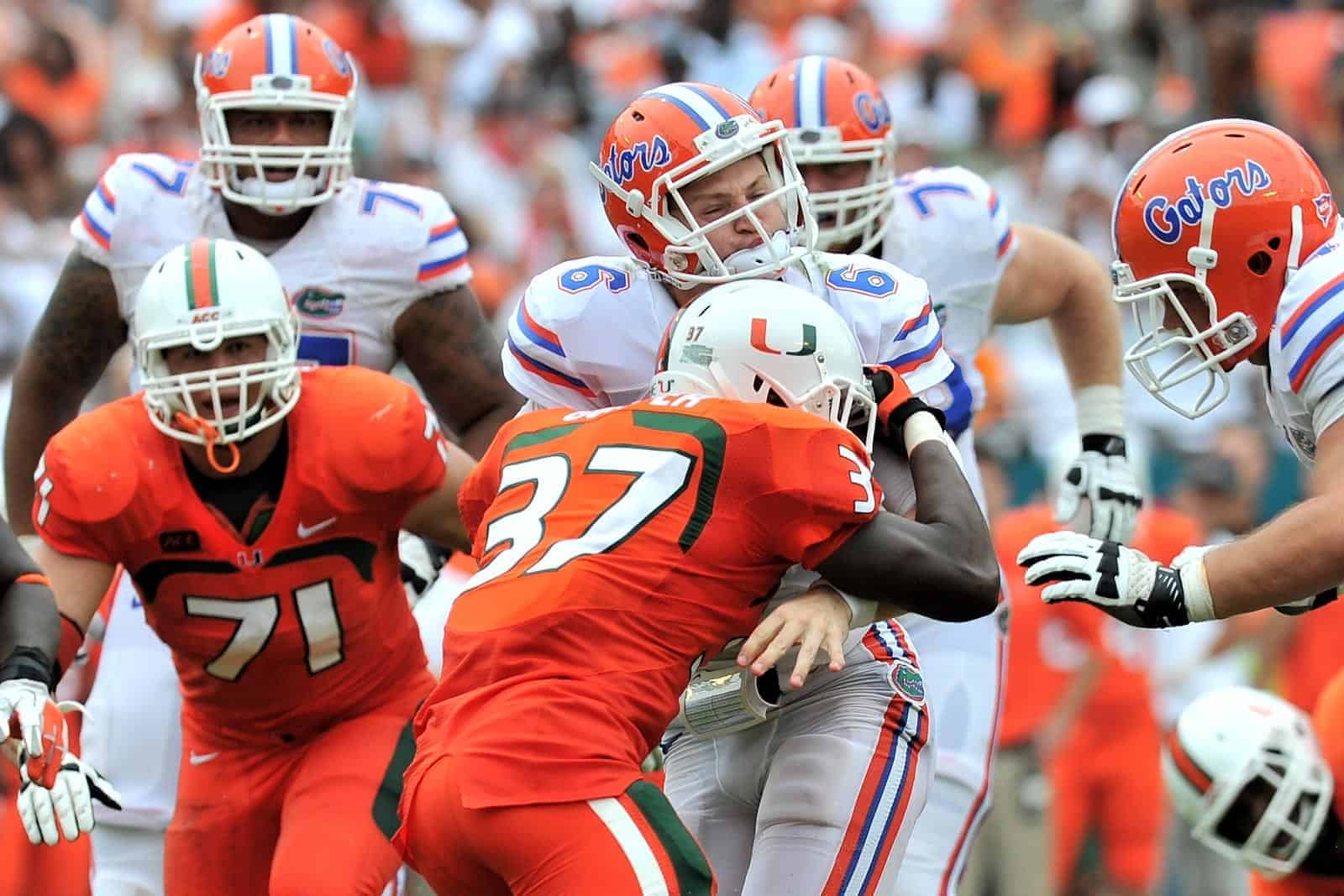 One of the biggest costs of the enormous wave of conference realignment in college football from 2010-2013 was rivalry games.

Though the loss was great, it makes the slow resurfacing of now historic matchups even more delicious. We can only hope that the following ten pairings will be so well received that other former rivals are compelled to schedule future meetings.

Maryland and Virginia’s 78-game rivalry ended in 2013 when the Terrapins bolted for the Big Ten. The two schools, located just 130 miles apart, shared membership in the ACC for 59 years.

Florida and Miami met annually from 1944-1987. Beginning in 1988, the SEC changed its scheduling format from six league games to seven, thereby reducing non-conference games from five to four. The Gators opted to keep their yearly game with Florida State, but dropped the Hurricanes.

The Seminole War Canoe was awarded to the winner of the game from 1955 until approximately 1975. It was a whopper, carved out of a 200-year old cypress tree that was struck by lightning. The Canoe resurfaced in 1989 when it landed in Miami’s Sports Hall of Fame. That’s where it’s been ever since.

The Hurricanes lead the all-time series 29-26 and have won seven of the last eight.

UConn and UMass played each other annually from 1952-1999 as powerhouse members of the old Yankee Conference. In 29 of these 48 seasons (or 60%), either the Huskies or Minutemen captured the conference championship. On four occasions (1960, 1971, 1982 and 1986) they shared the title. It makes the rivalry one of the most meaningful despite its lack of curb appeal.

Ole Miss and Tulane shared membership in the Southern conference from 1922-1932 and in the SEC from 1933-1965, when the Green Wave went Independent. It means that 28 of their 71 total meetings were conference games.

Cincinnati joined Pitt in the Big East in 2005, leaving Conference USA after nine years. The River City Rivalry was short lived, lasting eight seasons before the Panthers moved to the ACC and the Bearcats transitioned into the American.

The rivalry and trophy were both named because of the two cities shared location on the Ohio River. The Paddlewheel itself is a whopper, almost four feet tall and weighing in at 95 pounds. It features a working engine room “telegraph,” a device used to communicate from the bridge of a ship to the engine room.

Pitt leads the all-time series 8-4, but Cincinnati has won four of the last five including the last two meetings.

The Panthers lead the all-time series 61-40-3, but West Virginia has won three straight.

Illinois and Missouri met in Saint Louis, Mo. six times from 2002-2010, hence the “Arch” part of the “Arch Rivalry.” Though not a true midpoint between the two schools, Saint Louis is 180 miles from Champaign, Ill. and 120 miles from Columbia, Mo.

The Tigers lead the all-time series 17-7 and have won six straight. The Illini last won in 1994.

Another historic in-conference rivalry, Oklahoma and Nebraska shared membership in the same league from 1921-2010. They first hooked up in the Missouri Valley Intercollegiate Athletic Association (MVIAA) in 1921 before joining the fledgling Big 6 in 1928. From there, it was the Big 7 starting in 1948, the Big 8 in 1961 and then the Big 12 in 1996.

The Sooners lead the all-time series 45-38-3 and won five of the last six meetings. The 1971 contest is widely considered the “Game of the Century.”

Penn State and West Virginia played consecutively from 1947-1992, until the Nittany Lions dropped their independent status and joined the Big Ten. The two schools are located 185 miles apart.

Since Pitt does not have a natural SEC rival, I would like to see them resume the Backyard Brawl with West Virginia on Thanksgiving weekend. Since joining the ACC, the Panthers have finished with a conference game against a former Big East opponent (Miami four times and Syracuse once), but this would be preferable.

How about an article on upcoming new rivalries?

How about looking at internal conference rivalries that also have been torn asunder by divisions. The ACC has a few, but I’m particularly looking at the rarely played now Auburn-Florida and Auburn-Tennessee annual rivalries. AU gave up the most when the SEC went to divisions losing these two long rivalries.

I would love to see the Keg of Nails game (Cincinnati/Louisville) return sometime soon.

The Navy–Notre Dame series has been played annually since 1927, making it the longest uninterrupted intersectional series in college football.

If you were trying to extend series I would love to see Texas vs Texas A&M continue.

I agree w/Mike; how can the writer be STUPID enough to leave UT-aTm out ?!?!?! SWC and Big 12 rivals, the bonfire that killed some students in the late ’90s, those 2 took that game SERIOUSLY !!!!!

This article is about “long lost rivalries” that have a future game or games scheduled. Texas and Texas A&M do not have a game scheduled.