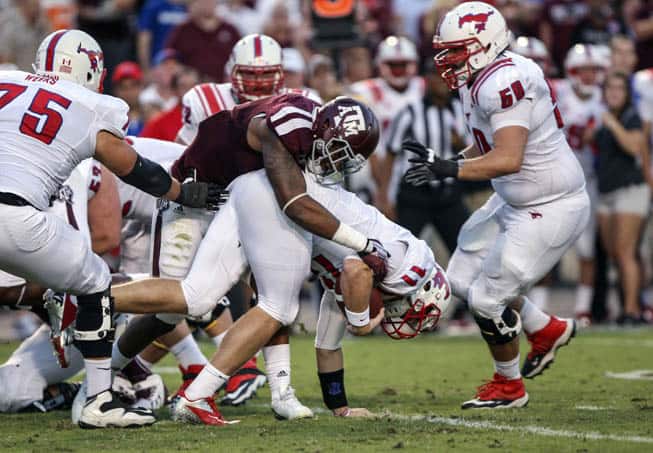 The Dukes’ two-hour road trip from Harrisonburg, Virginia to Blacksburg that resulted in a shocking 21-16 win over the Hokies is the most uncommon type of upset—a big-time program getting zapped by a smaller school from the same state.

It’s the little brother finally exacting sweet revenge on the big brother and before it actually happens, it’s a scenario that all sides consider impossible.

Here’s a look at 10 games in 2014 where a smaller school will have the rare opportunity to play giant killer versus the heavyweight from its own state.

Though the list doesn’t include every in-state showdown in 2014, it highlights the ones with the most potential for a dazzling dose of shock and awe.

A regular fixture in the BCS era, Oklahoma and Tulsa have met seven times since 2000. The Golden Hurricanes last upended the Sooners with a 31-24 win in 1996 and last won at home in Tulsa in 1942.

Texas and North Texas last played in 2006, a game the Longhorns won 55-7. All nine contests have been played in Austin and Texas has a 300 to 92 all-time scoring advantage over the Mean Green.

Michigan State and Eastern Michigan have played six times since 1996 but before then hadn’t clashed since 1899. All but one game, the first meeting in 1898 which was in Ypsilanti, have been played in East Lansing.

Only 12 points separated Iowa and Northern Iowa the last two times they squared off. The Hawkeyes won 27-16 in 2012 and survived a 17-16 decision in 2009. The Panthers’ only upset win came via an 11-5 victory in 1898 in Cedar Falls, the only meeting played outside of Iowa City.

Washington and Eastern Washington’s only previous clash came in 2011, a nail biter the Huskies pulled out 30-27. The Eagles’ are 1-9 all-time against the Pac-12, the only win coming last season when they upset Oregon State 49-46 in Corvallis.

Tennessee and UT Chattanooga haven’t played since 1969 when the Vols blanked the Mocs 31-0 in Knoxville. Chattanooga last beat Tennessee 56 years ago, in 1958, a 14-6 shocker.

LSU and ULM have met twice in history, both games coming since 2000. The Tigers have outscored the Warhawks 100 to 7, the only ULM score in history coming via a fourth quarter touchdown in 2003’s 49-7 decision.

Former league-mates in the old Southwest Conference, Texas A&M and SMU have met four times since the SWC dissolved after the 1995 season. The Mustangs’ last win came in Irving, Texas in 1984 but they secured a 21-21 tie in 1994 in San Antonio. The Aggies will also face in-state opponents FCS Lamar (Sept. 6) and Rice (Sept. 13) this season.

Stanford and UC Davis last played in 2005, a game the Cardinal dropped 20-17 on its home field. Stanford’s only win in the series came all the way back in 1932 when it beat the Aggies 59-0 under head coach Pop Warner.

The Ohio State – Cincinnati rivalry game could be interesting. The Buckeyes have avoided playing the Bearcats recently when they were good . UC could pull an upset this year in Columbus.

You should probably look up the definition of a rivalry.

What about georgia southern-georgia tech? Tech is certainly beatable and southern knows how to defend the option obviously.

Georgia Southern will beat NC State this year. So will Old Dominion, probably.

I wouldn’t call Cincinnati a small school. They have been in a BCS league since 2005 and went to some Orange and Sugar Bowls. That said it would be a huge win for the football playing Bearcats.

They were a Texas missed FG away from going to the BCS championship game back in December ’09.

Might be the year for Temple to defeat PSU…

No mention of Boston College @ UMass?

Northwestern vs Northern Illinois should be interesting as well.