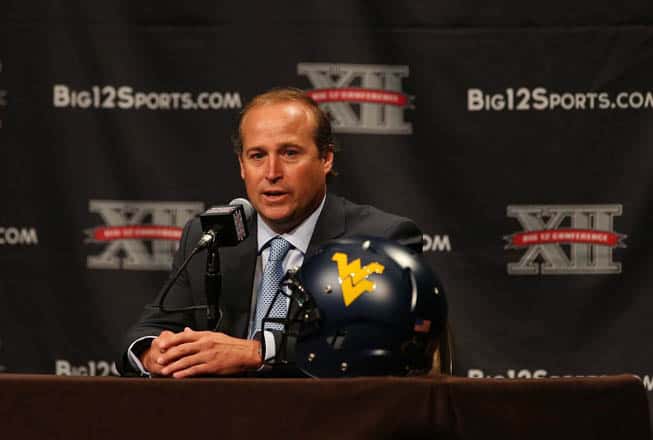 With the College Football Playoff set to begin after the 2014 regular season, it’s widely believed that the selection committee will place an emphasis on strength of schedule. How much emphasis is anyone’s guess at this point.

In the meantime, some schools are preparing for the playoff era by adding current BCS opponents to their future non-conference schedules.

One of those schools is West Virginia. Director of Athletics Oliver Luck went on record in May stating that he wanted to get Pittsburgh, Virginia Tech, Virginia, and Penn State on their future schedules.

Since that time, Luck has successfully added Virginia Tech in 2021 and 2022, appears close to reviving the Backyard Brawl with Pitt, and is reportedly finalizing a home-and-home series with Penn State.

All of these moves, plus the moves of other schools, show that college football is moving towards tougher schedules similar to the NFL, Luck told the Charleston Daily Mail.

The Mountaineers will certainly have more of an “NFL schedule” if they end up playing two of the four previously mentioned schools in the same season in addition to their nine Big 12 games.

Schedules could also get even tougher if the power conferences opt to break away and form the new so-called “Division 4.” In that scenario, it would be very likely that Division 4 schools would only schedule each other.

West Virginia head coach Dana Holgorsen also provided some future scheduling updates to the Daily Mail, including their desire to discontinue scheduling FCS teams. He also said that they may play a series with East Carolina and would be open to playing one-off games at Pitt or against Penn State and Virginia.

“Something is going to happen with East Carolina that’s going to make it more attractive for us – something possibly along the lines of a home-and-home with ECU and a neutral site game,” Holgorsen said.

“I’d be in favor of us and Pitt playing once in Pittsburgh (at Heinz Field) because it’s a big venue and because we’d have more people than they would. Us and Penn State in Philadelphia. If you can do a home-and-home, great. If you can’t, then do one game in a bigger venue. A home-and-home with Virginia, or a neutral-site game with Virginia in (Washington, D.C.)?”

they should just blow it all up, pick 128 schools, and they are eligible for the national championship, 16 divisions or conferences, whatever you want to call them, each with 8 teams, and you play everyone in your division once per year, and then your play the corresponding teams from the other conferences on your side of the country, that would be 7 more games if it is split east and west, there would be 8 conferences in the east and if you finished number one in your conference, the next year you would play the other 7 teams that finished number on in their conferences, in addition to your 7 division games thats 14 game season, all division winners go to the playoffs, no conference championship games,

Thats rediculus. I say take the main 5 conferences, maybe adjust them so that we have 4. Switch Colorado and Boise State. You could then have 16 teams per conference. 2 divisions each(North and South, or East and West). You play the seven teams from your division, four from the other division, and three from different conferences. You could even do one from each based on your overall record in your conference. The two division winners have a conference championship game, with the 4 conference winners meeting in the playoffs. You could even do like in the NFL where each conference has 4 divisions of 4 and pair them up where each year you pretty much have 2 divisions of 8 but they change each year.
Heres an example: The Pac 12 would have 4 divisions(Northwest, California, mideast(Arizonas, Utah and BSU), and east(Oklahomas and Kansas’s)). One year, the Northwest and California would act as one division, while the mideast and east would be the other. The next year, Northwest and east while the other would be the Mideast and California, then Northwest and mideast versus California and East. You can just chuck the other 61ish teams into their own division or add them to the FCS. Do you really think that Alabama-Birmingham could a NCG? or New Mexico State? or Northern Illinois? Get real.

frankly my dear, i dont give a fluck what they want, the ncaa controls them and in the best interest of the children, they should change it to do it my flucking way, dont flucking argue and why, why, waaaaaa, i dont wanna change, i wanna beat up on kansas and duke every year, boo hoo, waaaaa, its not fair that have to play tough teams, go flush yourself down a toilet you

Leave it alone. A playoff will never work. Too much imbalance among the conferences. Someone will stay home. Sec has four teams yearly that belong in playoffs. Better stick to bowls. American and ACC will never get in…

Uh, Jeff…they already ARE going to a playoff. Sure, 4 teams now, but this summer the conferences commissioners, and school presidents met to talk about going to 8, and we haven’t even STARTED the 4-team deal yet. Mark my words, by the time the current 4-team cycle ends, they will have worked out a deal to go to 8. And once they start the 8-team deal, you can bet they’ll start talking about 12, or 16. Bec’s if there’s one thing conference commissioners, and college presidents like to do/do well, its explore ways to make more money.