Why is the College Football Playoff losing viewers? 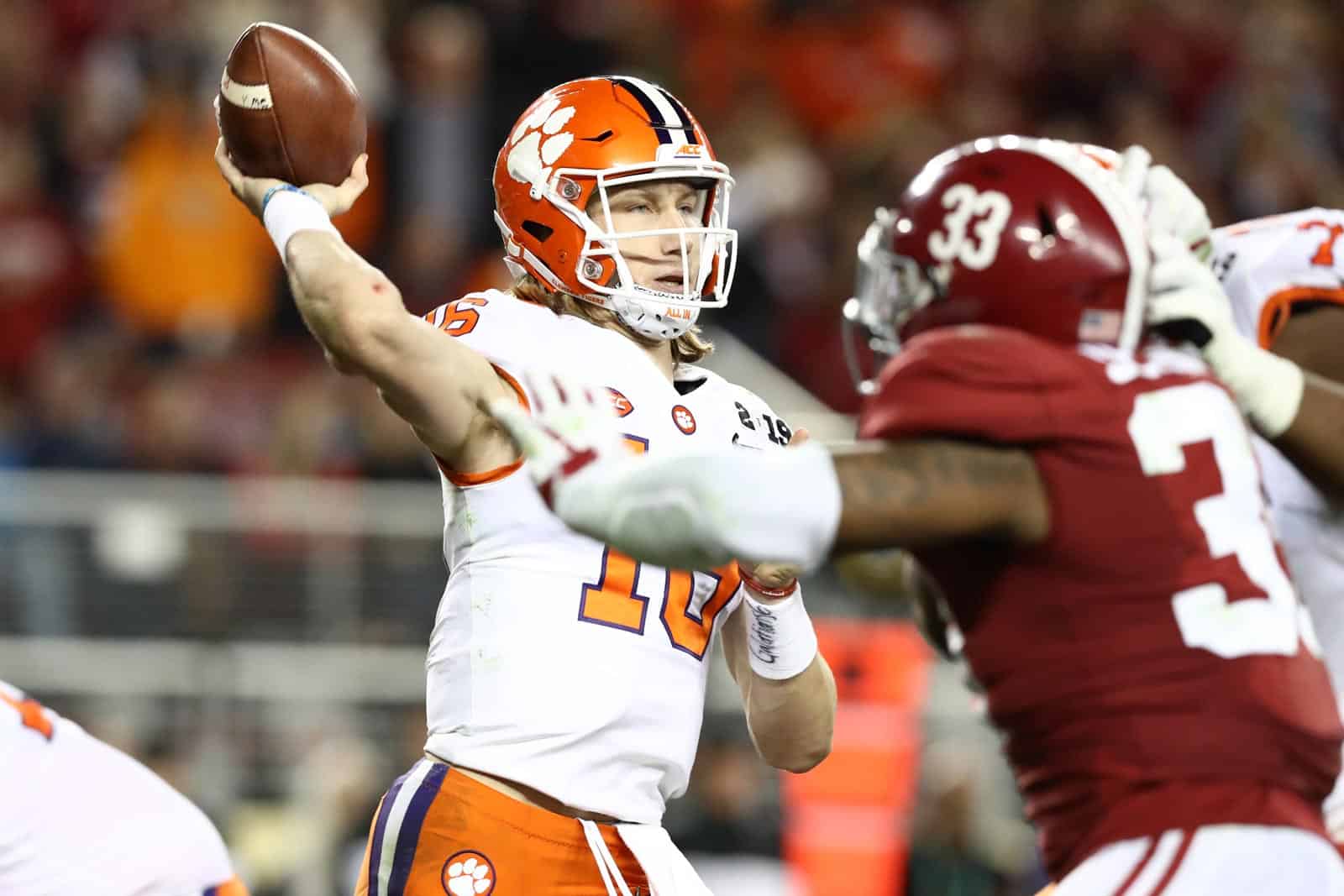 After drawing in 34.15 million viewers when it debuted in 2014, the most recent College Football National Championship game attracted nearly 10 million fewer fans and earned its lowest rating ever.

According to Sports Media Watch, the 2018/19 version of the CFP bracket performed just marginally better (in viewership) than the format’s worst outcome in 2016.

The same basic trend applies for the two Semi-Final Games.

The semi-final that enjoyed the biggest draw was Ohio State-Alabama’s meeting during the inaugural season. It did so well that it out-performed, in viewership, three of the five championship games. The exceptions came in 2014 (the single-best draw in the format’s five-season run) and 2017 (the scheme’s second-highest draw).

The semi-final that performed the poorest all time was the 2015 matchup between Clemson and Oklahoma. The next lowest outcome came via this past season’s Clemson/Notre Dame game, which managed just slightly better results.

To put that into perspective, Clemson-Notre Dame – a contest where the winner would ascend directly to the national championship game – drew fewer viewers than last season’s SEC title game between Alabama and Georgia, which had 17.5 million tune in.

Why are the numbers slipping, or, at the very least, why are they not holding steady?

The first and most obvious factor is that the newness of the four-team format wore off rapidly. Though viewership may well be affected by the calendar date, logically, this can’t explain the entire trend. Sports enthusiasts will find a way to watch something when it’s desirable enough. Think about how many times you’ve been to a wedding, or a Christmas party, or whatever, that coincides with a big game. Inevitably, there’s going to be a throng of people shoved around one small screen desperately trying to stay updated – despite the relational consequences.

The most obvious way to boost ratings is to expand the playoff to eight teams. Not only would this provide a dose of “newness” it would increase the integrity of the title itself. Until each Power 5 conference champion has a clear path to the bracket, there will always be questions.

In 2014 – how would Baylor (11-1) and TCU (11-1) have fared in a bracket that also featured one-loss teams in Alabama, Oregon, and Ohio State? In 2015, Pac-12 champion Stanford got left behind. In 2016, Penn State and Oklahoma didn’t make the bracket despite winning their respective conferences. In 2017 – when two SEC teams ascended to the playoff – Ohio State and USC both got snubbed. Last season, Notre Dame’s inclusion meant that the Big Ten (again, the Buckeyes) and Pac-12 (Washington) were excluded for a second straight season.

It’s a reason not to watch the CFP package – because your conference isn’t represented. Because you know, no matter how much better it is than the BCS, that it’s not a legitimate playoff scheme for a 130-team league.

The semi-finals and championship should be scheduled precisely where the big games are during the regular season – Saturday in the mid-afternoon (think CBS’ SEC package) and primetime (think ABC’s big game of the week).

When does the NFL always host the Super Bowl? On Monday night during primetime? No. The pro’s have an early evening start on Sunday – also the same day that they schedule the meat of their regular-season games.

Saturday’s are made for college football and on Sunday’s, we switch gears to the NFL.

How many more viewers would be drawn to Saturday evening championship football? The Pac-12 title game – a Friday night affair – drew 4.05 million viewers this past season, while the Big Ten – airing 24 hours later on Saturday night – pulled in 8.66 million. Neither matchup was especially compelling (Washington vs. Utah and Ohio State vs. Northwestern), but only one doubled up on viewership.

The most obvious roadblock preventing an all-Saturday playoff is the NFL, which runs its own postseason on Saturdays and Sundays during the month of January. A potential fix would be to move the entire collegiate playoff schedule up, eliminating the long lead-up top teams enjoy/suffer through before their first game.

In an eight-team scheme, the first round would be played on the third Saturday in December, the second round on the final Saturday of the month. and then the championship would still be slated for the second Saturday in January.

The “other” bowls would fill in around the non-Playoff dates.

The format would stay that way eternally – so there would be no confusion, one season flowing naturally into the next. It’s precisely the same approach to the Super Bowl falling on the first Sunday in February.

Nobody forgets when that is. Don’t think so? It drew 98.19 million viewers last season, just shy of four times more than the CFP Championship game did.

Maybe the average fan like myself is sick and tired of ESPN shoving this down our throats and dividing the FBS teams,which play the same damn level of football,into this Power 5 (ESPN money) and Group of 5 (non-ESPN money) division. Why even watch this play-off farce? Central Florida deserved a final 4 spot far more then Oklahoma did but ESPN wasn’t going to have that now,would they?
Want to recapture falling ratings and interest? No more “neutral” games….and make the damn SEC teams travel north in October and November once in a while. Watching Florida play Norte Dame in November or Clemson playing at Oregon in late October will make for a more even playing field. I watched a lot of games on TV last three years and I noticed a LOT of empty seats at so called “Power 5” schools who are having trouble drawing while feasting on FCS schools in chasing a 6-6 record and a bowl game. People want to see meaningful games against FBS schools and they’re not paying for season tickets nor watching until scheduling matters.

Maybe because everyone knows Alabama is cheating their ass off and the NCAA and the media doesn’t give a damn. At least that’s the case in the Southern U.S.

I think TV in general is losing viewers no matter what is on. As for your eight team playoff, having the championship on the second Saturday in January, wouldn’t that be against NFL playoff games?

More teams does not constitute better. Playing on Saturday and a week earlier sounds sensible,but leaving UCF out shows all real fans that the playoff is money oriented and not champion oriented. I am not against money, but I am more likely to watch a real championship playoff over a money making playoff. BTW, several years backI suggested a Western Michigan vs Alabama semifinal and was shouted down with a “Who wants to see a smear?” … and a smear was what we saw (DidNot see,actually). To me the Cotton Bowl victoryby Wisconsin was a better watching situation. Aloha.

One factor I think you need to take into account is the increasing dominance of the South.

To get more viewers you need strong Western, and Northern schools. Otherwise your viewership will be skewed to the 1/3rd of the nation which is the South and not get as many viewers from the 2/3rds in the North and West.

The Rose Bowl in the pre-playoffs had a larger portion of the country with a rooting interest, as almost 1/2 lived in teh Great Lakes Midwest and the Pacific Coast. But except for that one Ohio State team in 2014, there really has not been a strong Great Lakes Midwest team to carry the region.

This I think is the other factor besides novelty wearing off, Football and TV in decline generally. There just is not a good geographic distribution of rooting interest, so too narrow a audience is interested.

Why? Same teams and games before New Years Day. There is viewer fatigue in the same way as travel fatigue. Which fan can go to a CCG, semifinal, AND NC? More casual fans will also choose to skip some on TV too. Quarterfinals will only exacerbate these issues.

Put 4 bowls (Rose, Fiesta/Cotton, Sugar, Orange/Peach) on New Years Day (or the 2nd in cases where 1/1 is a Sunday), and determine which 2 are the semis only after the CCGs. If Alabama is #1, then the Sugar Bowl hosts them and #4; If Washington is #2, then the Rose hosts them and #3; etc. Schedule the 2 non-semis in the timeslot not competing with the playoff (the early slot, unless the Rose is hosting a semi then).

The “rotation” of semis works if you want to appease the bowls, but fans want “events” and “Fiesta Bowl” still means more than “National Semifinal #1” in college football. A travelling National Championship probably must be kept to avoid favoring one bowl site over another.