What are the options for the 2020 college football and NFL schedules? 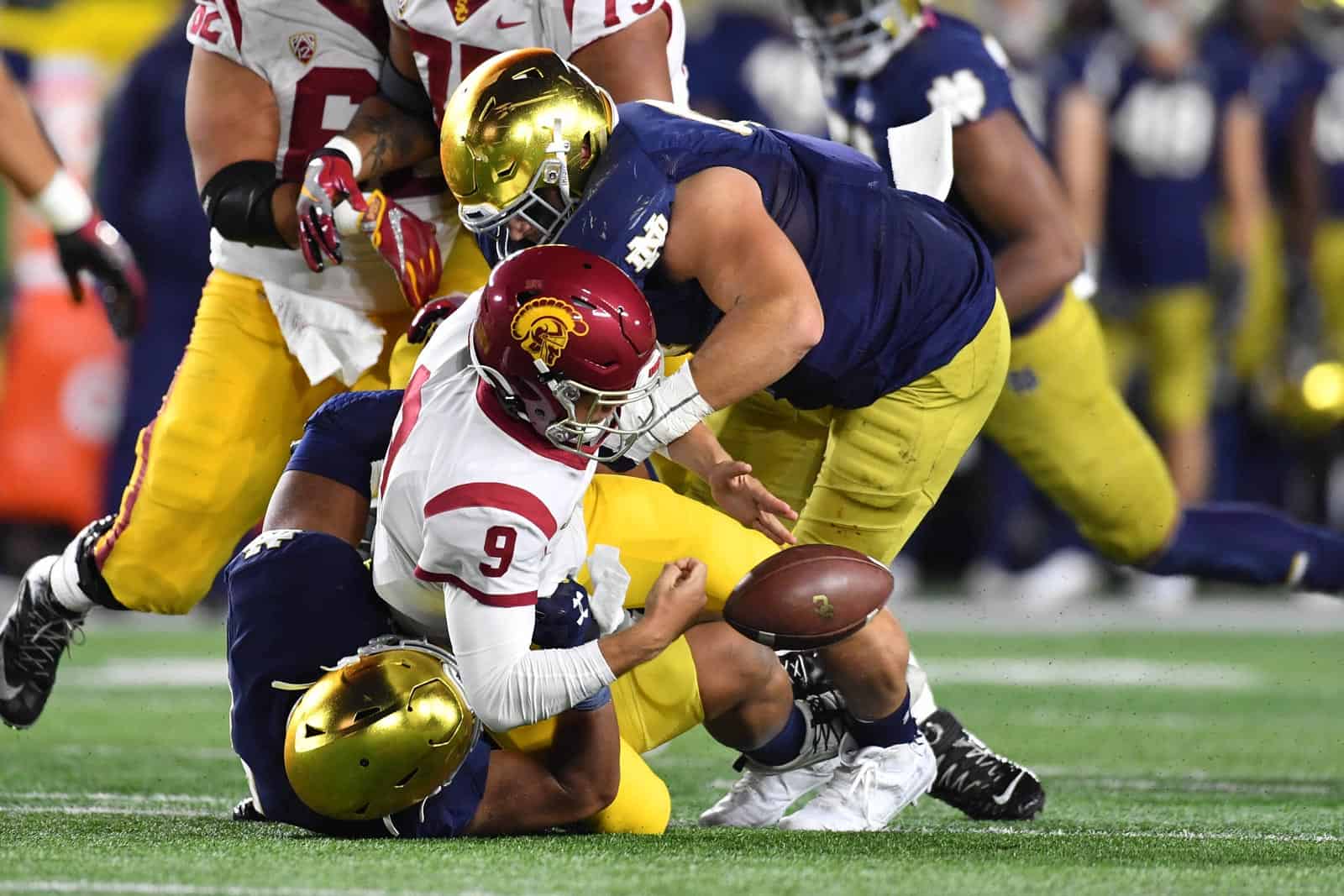 As the novel coronavirus 2019 (COVID-19) pandemic continues to take a toll on the country, college football and NFL coaches, commissioners, and more are mulling options to salvage their 2020 seasons.

There’s also the issue of Independent teams. The FBS has seven independent programs, including Army, BYU, and Notre Dame, while the FCS has only three, two of which will be playing their first seasons at this level (Dixie State and Tarleton State).

Changes to the NFL schedule would be simpler since there are only 32 teams with one commissioner. The NFL will hold their annual draft as scheduled beginning on Thursday, April 23, albeit virtually, and they plan to release their 2020 regular-season schedule by Saturday, May 9.

Let’s take a look at some of the options that have been discussed for both the college and NFL schedules in 2020:

Play the season as scheduled

This would obviously be the best case scenario. Playing the season as scheduled will likely only happen if the COVID-19 pandemic subsides in late-April or May and teams can return to campus for conditioning and practice by around July 1.

A return by that date would be the latest to avoid a change in the 2020 schedule, which was suggested by Notre Dame head coach Brian Kelly.

“If you can’t start training your football team by July 1, you’re going to need at least four weeks,” Kelly said. “Strength and conditioning coaches are going to want at least six. Sports medicine is probably looking at 4-to-6 weeks.”

This option would also require that state governments and/or individual universities ease or rescind their restrictions on gatherings, some of which currently extend into June or later. The University of Oklahoma has suspended all in-person activities through July 31.

Playing an eight or nine game schedule with conference games only has been widely suggested. This would eliminate non-conference games, which would be devastating for Group of Five teams and FCS teams that depend on game guarantees to fund their athletic departments. Those guarantees range from around $500,000 for FCS programs and up to $1.9 million for FBS programs.

Between the two options, a nine game schedule would be more likely because the Big 12, Big Ten, and Pac-12 each play nine-game conference schedules. That would mean the ACC, SEC, and Group of Five teams would need to retain one non-conference game. Stadium’s Brett McMurphy suggested that Notre Dame could play nine ACC foes, which would settle their schedules.

That would leave the Independent teams, which could schedule each other, keep some games they already have scheduled, or seek games with teams that need a slot filled.

Play the schedule in late Fall/Spring

Another option is to delay the start of the season and play some of the games in the Fall and then complete the schedule in the Spring. This option was mentioned by an unnamed Power Five athletic director.

“If we have to delay the start of the season, we could split it between two semesters,” a Power Five AD said. “Some bowls may not occur because of this, but we could play a full season, a majority of the bowls and the playoffs.

“Look, we are doing all types of contingency planning, even if these hypothetical scenarios never come close to happening. The biggest issue is (a start date) is a moving target.”

Another option would be to play the full or truncated 2020 season beginning in the Spring of 2021.

“If it’s our only option, we absolutely would have to do it in the spring,” a Group of Five AD said. “It would be incredibly difficult for us to survive financially without football revenue. That’s how critical it is to each university. We have to be creative in our thinking on this.”

Although the chances of this are unlikely, a complete cancellation of the 2020 college football season could happen if COVID-19 lingers or gets worse. This would be the worst case scenario and would hurt every school and conference.

Play the season as scheduled

The current stance by the NFL is that they will play the 2020 season as scheduled, meaning beginning on Thursday, Sept. 10 and continuing through Super Bowl LV on Sunday, Feb. 7, 2021.

Obviously, this will only occur if COVID-19 subsides by Summer and NFL teams can begin training/practice in July.

Reduce the number of games played

Suggested by CBSSports.com, the NFL could truncate their 16-game schedules by eliminating their four non-conference games. That would take the schedule down to 12 games and it could be tweaked even further if necessary.

Another option considered by many is to play the games in empty stadiums. But that would cause other issues, such as no ticket revenue and the loss of home-field advantage.

Although the options listed above are not exhaustive, they are the most widely mentioned and discussed. Feel free to discuss the options and suggest others in the comments.

The “pay” games need to be paid regardless of whether the games are played or not. The Power schools can afford to pay the smaller schools the money even if the game isn’t played. Most of those game contracts have clauses that make sure the smaller guys get paid even if the game can’t happen for some reason.

That would leave the smaller schools to play a game against a comparable opponent instead of having to go through traveling halfway across the country to get drilled and beat up.

A conference-only season that happens in the fall as scheduled is one I could live with. One problem with that though might be the fact that the virus could re-emerge with cooler weather. Living in Atlanta, I usually dread the blazing hot summers, but this is the first where I’m actually pulling hard for the most hellish summer that ever was, hoping that helps subdue this thing enough to where we can catch up medically and recover economically.

Contracts do not have a clause that “make sure the smaller guys get paid even if the game can’t happen for some reason” that I have ever seen. I plan to do a separate piece on non-conference games and will include some contract language.

There will also not be many “Power schools [that] can afford to pay.”

No NCAA basketball tournament revenue, reduced football revenue, far smaller gamely revenue (if any) …. across the landscape, nearly all D1 schools, including most of the P5, will be looking at severe budget strains in their athletic budgets.

All contracts have an “Act of God” clause the void the contract. Although the link is contracts that ar a few years old, the contract language related to issues like Covid-19, has not changed.

It doesn’t void the entire contract in most cases, but rather just the game affected.

EDIT: I’m referring to multiple game contracts. For single games, you are correct.

Hate to say it, but zero chance football is played in 2020.

I sincerely hope that you’re wrong. It will absolutely be a frozen, barren, dark, sad fall & winter without any football played this year.

Nobody can say zero chance. If you are, will you cut off a finger if your wrong? My guess is that would be a no. So, let’s stop with this zero percent talk.

I agree there will be no season.
Colleges will have to be able to open first and I don’t see that happening. No way colleges open for in-person classes in the fall. We need a vaccine and then everybody gets it and everybody can play.

If they have to delay the college football season. How about start New Year’s Day and 2nd?

It would be to cold and dangerous playing games north or Tennessee Oklahoma.

Daniel i live here in Tulsa Oklahoma and the weather here is crazy. I have seen in the past decade two blizzards in January, one with 25 inches of snow and on the flip side a few 70 degree days in January the past 4 years. We haven’t had severe snow storms here in about 4 years so we could probably play some games here. The temperature would probably be in the 30’s or 40s and the fields would be OK since 2 of the 3 University fields have turf (Oklahoma State and Tulsa) whereas OU has grass. It would be weird seeing an OU-OSU game in Feb or March if we started the seasons in January.

I think we all are somewhat jumping the gun. The earliest drop dead date was July 1, its April 9th. We could have a lot more information at that time. Lets not say things in the future are or are not happening. I get the sense that there is a hope for society to gradually ramp up throughout the summer. Fauci even said he thinks schools will be open “but it will be different.” I think colleges will want to open as well. I could see games being played at least initially with only students and faculty in the stands. I mean if campuses are open and the players live among the other students why can’t the other students come to the games. I get not wanting thousands of outside people coming for a game. Another thought would be to rationalize all 129 FBS teams this year. You could have 9-13 team regions and one 12 team region. This could save cost on travel as well as avoid cross-country trips and the potential of spreading the virus. You then could have a 12-team playoff with the 10 regional champs as automatic qualifiers and the committee could pick 2 at-large teams. Play the 1st 2 rounds the first 2 weekends in December and then have the semis as already scheduled. The 8 losers from the 1st 2 rounds could be the teams in the remaining New Year’s Six bowls.

The NFL could probably get away with playing a 6,8,10,12,or 14 game schedule. They also could delay the season 2-weeks and have the Super Bowl Feb 21 which is when it would have if they go to a 17-game schedule which could come in 2021 anyways. Preseason games could be played without fans or just not happen.

Presume the season will be seriously affected.
.
So, shift all contracts +1 year. any game scheduled for 2020 becomes a game in 2021. Any game in 2021 becomes a 2022 game, etc. Do it universally from an NCAA level in conjunction with the power 5 and group of five.
.
Now create a special shortened 2020 fall season with 8 or 9 conference matchups, as has been suggested. FBS has enough independents now that they can function as the “Independence Conference” and offset the shortage with the ten team Sun Belt and XII conferences as possible. For FCS, let the Big Sky adopt Dixie State for a year and the Southland adopt Tarleton State for a year.
.
It can be the year that contracts forgot.

I am writing a piece on my thoughts—remember folks—these are opinions and we can be respectful of all of them. Here are my thoughts—-my opinion and $5 buys you a Sunday paper.

-Kids have to be back on campus
-October 3 start date
-10 games through Dec. 5. No byes
-8 conference games
-2 nonconference games–somebody has to play New Mexico State and Massachusetts
-After Dec. 5, you guys can determine if the season ends there. Should we do bowl games, CFP, conference title games, you tell me.
-Assuming that we are somewhat back to normal, only 30 percent of capacity inside each stadium. We might be back at work and the kids might be back in school,but in a row that has 16 seatsa, only 5 peoplw will be allowed to sit in each row. That means seats 1, 4, 7, 10 and 13.

Just my thoughts. I’ll hang up and listen.

or push the season to Feb