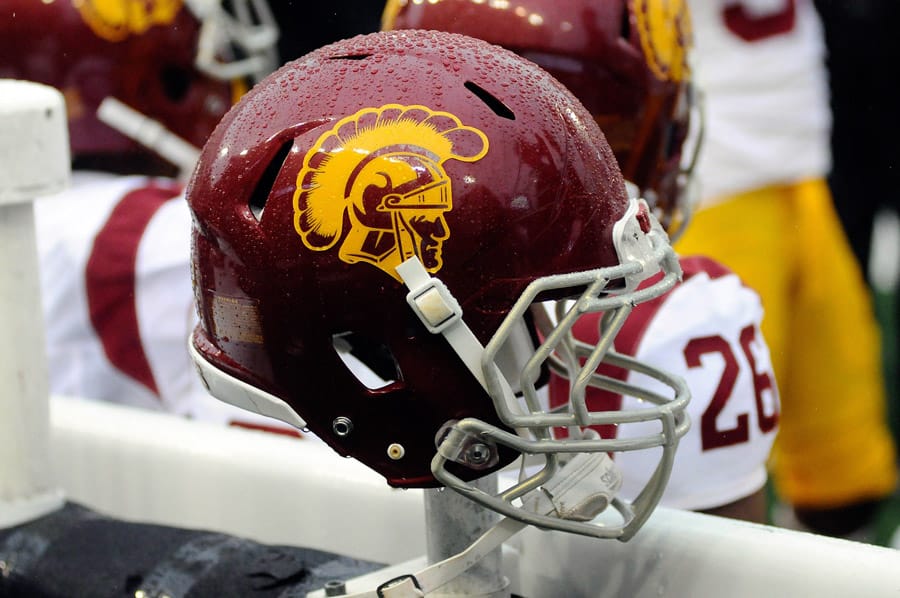 USC will host the Utah State Aggies at Los Angeles Memorial Coliseum on Sept. 10, 2016. The two schools have met five times previously with the Trojans holding a 5-0 advantage in the series.

The Trojans will play host to the Western Michigan Broncos to open the 2017 season on Sept. 2. The two schools have never met on the gridiron, and it will also mark USC’s first game against an opponent from the MAC.

The third and final game announced today is a matchup with the UNLV Rebels in Los Angeles on Aug. 31, 2019. USC and UNLV’s first and only meeting came back in 1997 and the Trojans came away with a 35-21 victory.

The addition of the three games today tentatively completes USC’s non-conference schedules for 2016, 2017, and 2019.

USC opens the 2016 season against Alabama in Arlington, Texas on Sept. 3 and later hosts Notre Dame on Nov. 26 to close the regular season.

After opening against WMU in 2017, USC hosts Texas on Sept. 16 and also travels to Notre Dame on a date to be announced. The 2019 schedule also features a trip to Notre Dame (date TBA, a visit to BYU on Sept. 14, and the season-opener vs. UNLV.

Shame on Tulane. Their out of touch AD continues to even attempt scheduling “names.” He is a cancer.

Western Michigan University fans welcome this addition to our schedule. We played #4 Michigan State and #1 Ohio State this year.
Too bad that our starting QB Zach Terrell would have graduated by then.

Maverick,
I was not trying anything, just stating a fact. You luv to complain when an SEC team schedules these games meanwhile USC does it & you have to use an excuse about (least we are playing Bama, ND & Texas). It does not matter who else USC is playing, just making the point before you complain about what the SEC does, look in the mirror 1st. That’s why I say hypo critic. You can not have it both ways, bashing the SEC while your team does the exact same thing, that’s why I continue to say that ALL TEAMS DO IT. Meanwhile you bash Bama for playing neutral site games & now USC is playing Bama, in a neutral site game, imagine that.

Do you not to see how illogical you sound? USC is playing 11 of 12 power 5 games. And the one non Power 5 game they’re playing are against Group of 5 teams. There is no FCS team.

Comparing Alabama’s schedule to USC’s is a joke. USC has 1 more away game, 2 more P5 games, 0 FCS… USC easily has the hardest schedule in the country. For a team like 2015-16 national champions Alabama not to play a schedule like that is a joke.

How can you not see that?

I was not comparing the scheduling, all conferences are not created equal, we have a difference of opinion, that’s all. It does not bother me that Bama plays in a 8 game conference or that Bama plays 1 FCS & 2 smaller schools.2016 Bama starts with USC & as much as you would like to call them (cupcakes) W.Kentucky just won Con.USA championship & went 12-2, Chattanooga lost in the playoffs in FCS, Kent St is the only team I can not speak for but they are as equal as Utah St is. Just like USC it is extremely hard to get through the season just losing one game or playing for an SEC championship or even a national champion, I understand you think the SEC is a joke but that is your opinion nor will I try to change it but just because you play a in a 9 game conference does not make it harder on you. Good luck to your Trojans next year.

The fact I’m telling you is because the Pac 12 plays 9 games, they will have 6 more losses guaranteed.
Because of that, it makes the conference look weaker than it really is.
If the SEC played 9 games, they would have 7 more losses guaranteed. So instead of playing that, they play a weak Group of 5 team at home. It’s false advertising.
Do you see where I’m coming from?