UConn reportedly leaving the American, may play as an FBS Independent 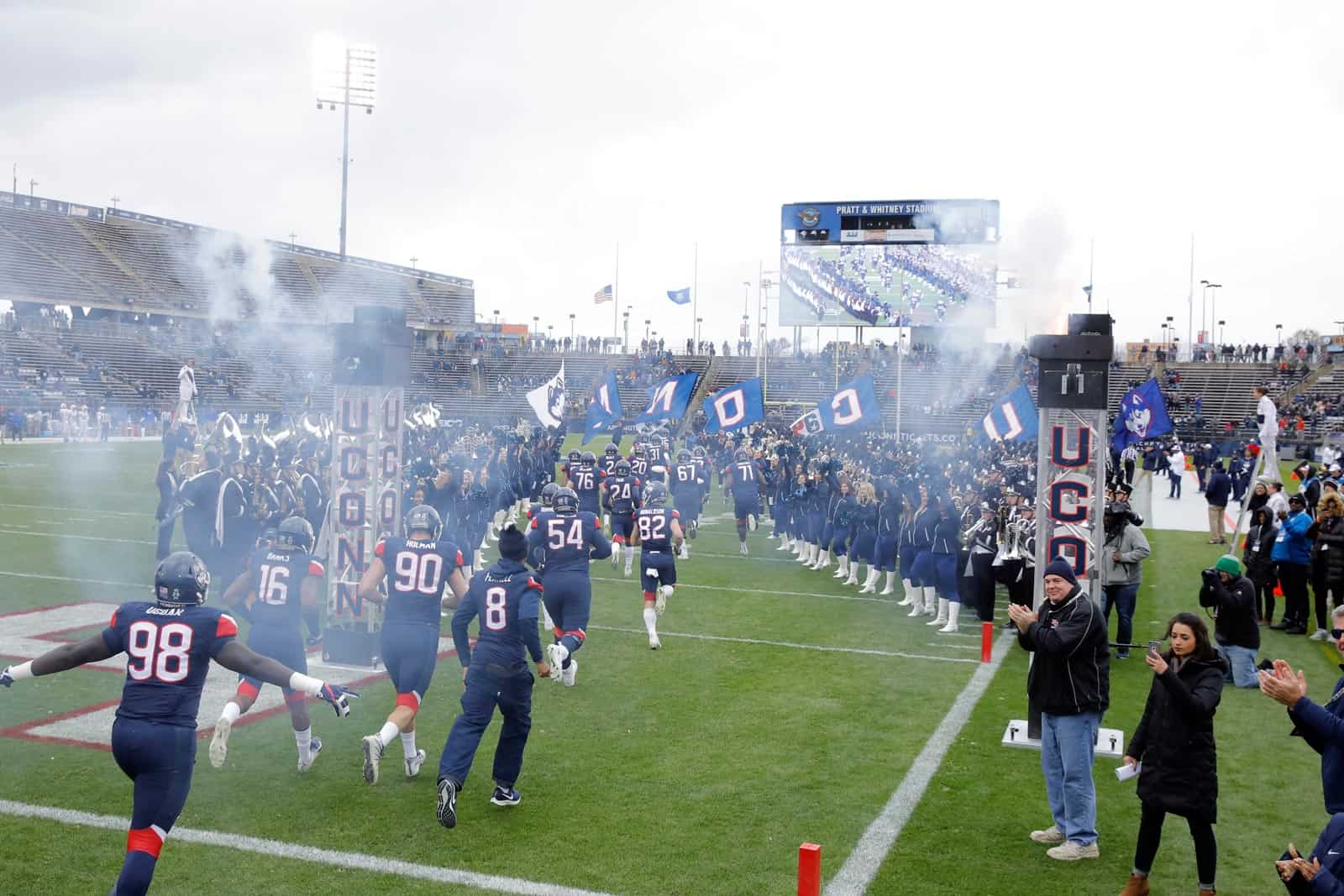 The UConn Huskies are leaving the American Athletic Conference following the 2019-20 season, according to various reports.

UConn is planning to move their Olympic sports back to the Big East Conference beginning with the 2020-21 season. The Big East doesn’t sponsor football, which will leave the Huskies football program with a big decision to make.

Dropping down to the Football Championship Subdivision (FCS) is not on the table, according to Brett McMurphy of Stadium. He further reports that the Huskies will pursue membership in the Mid-American Conference (MAC), Conference USA, or even the American as a football-only school.

However, McMurphy indicates that the chances of football-only membership in either of those three conferences is essentially slim to none. UConn football has been dreadful since playing in the 2011 Fiesta Bowl, going 28-69 since, and wouldn’t provide much value.

Filling out a 12-game schedule as an FBS Independent would be tough for UConn, but the Huskies could partner with the other Independents, except for Notre Dame which is typically scheduled out each season. UConn could also look to some of the Northeastern FBS schools with an annual contest against an FCS team.

As of today, UConn has completed their non-conference schedules for the 2020 and 2021 season. If they did become Independent, they would have a huge challenge in assembling a schedule for next season.

Speculation has also begun on who the American Athletic Conference will replace UConn with. Names such as Air Force, Army, Boise State, BYU, Charlotte, Georgia State, and Old Dominion have been mentioned, among others.

The American could also choose to stay at 11 teams, although that would create an imbalance in their divisions. That could be solved by eliminating divisions and staging their championship game with the two teams with the best records in conference play, similar to the Big 12.

Edit: The AAC can also keep their divisions with a slight imbalance and still play a championship game, per NCAA rules.

The Mountain West schools won’t go anywhere,why should they? The Mountain West is stronger conference football wise then the American. I do think the MAC would be a good fit for UConn…lowered expectations would help the program. Playing as indy…..that would be very rough indeed.

You must be joking right? Why would the AAC want to stoop down to a Mountain school? Not a single program would manage a .500 record with an AAC schedule.

The MAC isn’t going to take UConn unless it’s as a full member. Not after getting burned by UCF and Temple and then kicking UMass out for not wanting to commit as an all-sports member.

Independence may be rough but it seems more navigable than it was a few years ago. It may not be ideal but NMSU, Liberty, UMass, BYU, and Army are pulling it off.

UConn could probably play NMSU, Liberty, and UMass every year. BYU and Army are more in-demand and higher-prestige schools, but let’s say they can play one or the other each year. Four, maybe five games a year against other independents. Play a regional FCS school. Play 2 or 3 money games at major P5 opponents. That leaves 3-5 openings to schedule home-and-homes of various sorts with G5 schools or maybe the occasional P5 home-and-home or 2-for-1. Messy, but it seems doable.

Don’t forget about Marshall who also used the MAC as a stepping stone.

But Marshall had a long history in the MAC. Their reason for leaving the first time around was partly due to the program being decimated by the crash. They still maintain cordial relations with MAC schools, particularly longtime rival Ohio. Very different from how UCF made promises they didn’t keep.

I don’t think Villanova would be willing to move up. And Toledo doesn’t leave the MAC unless BGSU comes with them.

Toledo multiple times reached out ro CUSA in the 90s (when CUSA was good) and would jumped if given the chance. Without BG.

Toledo won’t leave the MAC now, but it’s more because the MAC is a nice, compact league of very similar schools, and UT can’t really afford the extra travel that would come with this league. But I don’t think BG would ever hold them back.

Clint, Temple would never do that. They are currently in a much better league.

Patrick, the difference between the MWC and the AAC in football is negligible. I agree that there’s nothing in it for the MWC or BYU. But let’s not pretend that the MWC is far more dominant than the AAC. It’s even in football. When you factor in basketball and baseball, the AAC is clearly a better overall conference. When you add in money, the AAC wins Everytime.

I predict the AAC will be stuck choosing between UAB, Buffalo, Southern Miss, or Charlotte. They’ll land on UAB.

Greg,
I love how you have to throw in baseball to really make your point there lol, I mean I didn’t realize the AAC has been winning national championships in baseball since they formed and outside of UConn and UCF I can’t name a decent baseball school in the AAC, now since you want to dig into the past lets not forget Fresno State has had a strong baseball team for year CSU has had hit and miss seasons, would you like me to keep going? Now when we are talking about basketball, UConn is still the name brand for the AAC but they have struggled since the AAC formed, why? because they haven’t had the same prestige to recruit. Wichita State would leave the AAC in a heartbeat if the MW offered them a spot because of tougher competition.

Now to the main point. Football, top to bottom the MW is far more superior than the AAC, yes the AAC has “better” opportunities because of bigger TV markets and more favorable start times. But remember the MW had 3 teams finish in the AP top 25 (Boise State did so with 3 losses btw).

Thanks for your opinions, but if you’re going to debate me, I prefer to deal in facts.

Although the AAC appears to be a better football conference over four of the last five years, I’ll repeat… the difference between the two is negligible, and therefore I don’t think the MWC teams would jump ship.

FACT #2: East Carolina and Houston have consistently been the strongest baseball teams in the AAC, not Connecticut and UCF. ECU finished this season ranked in the top 10, concluded the season with a Top 5 RPI, they made an appearance in the Sweet 16, and hosted a regional for the second year in a row. The AAC placed 1/3 of its membership in the NCAA Tournament in what many considered to be a down year for them. Houston has made the NCAA Tournament 5 of the last 6 seasons.

Yes, Fresno State made a magical run in the NCAA Tournament over ten years ago. It was amazing. But that Cinderella run in 2008 doesn’t propel the MWC as a baseball juggernaut. The AAC is a top 5 conference in RPI in baseball. The Mountain West has not even been close to the Top 5.

OTHER NOTES
1. Before you accuse my of east coast bias…. I live in Colorado and can drive to the campuses of Wyoming, Colorado State, and Air Force in less than two hours.
2. I reiterate my original point that I doubt that the difference between the two conferences is enough to make a MWC team jump ship.

The American does not have to eliminate divisions, they just need a waiver like the MAC got (two years with UMass) and C-SUA got (when UAB dropped football for couple years). The waiver is pretty automatic, at least the first time. So it’s a non issue until at least 2022.

To work you just break up one game in the larger Division (6 team “West”), and I’d make it one of Navy’s games. I’d cycle Memphis, Tulsa and Tulane, 2 years each to get through 6 years — to avoid Navy missing a game in Texas (they made being in the west and playing a game in Texas a requirement for their entry). No point planning past that, as every thing changes after the 2025 season when the B12 GOR expires.

Division-less football requires a decision that effects all the conferences and there will be push back from the conferences who do not want it or are afraid it could hurt their conference in realignment or playoff chances. But a waiver is easy to get.

ESPN will decide if any schools are invited or not. The preferred choices, BYU, Army and maybe Air Force are in no need of money and are not interested in moving; each has the situation they desire and is working for them already. The American is not an improvement for the goals set by those schools from their perspective (it’s actually a down grade for BYU). There is not another school ESPN would approve that I can think of. They stay at 11.

ESPN provides all the leverage needed to get the waiver. They want the CCG and they carry the CCGs of the MAC, CUSA, SBC, SEC, B12 and ACC as well as the American. That is easily a super majority who want to side with ESPN. Also all conferences want stability, and a waiver from from absolute round robin is the easiest way to solve the problem and not force continued realignment that no conference wants.

They don’t need a waiver to scrap the divisions now because the Big 12 petitioned for that last year. They have no divisions and a championship game.

But yeah, the AAC could keep the divisions also with a slight imbalance. MAC had that when UMass was a member.

LET THEM STAY, by far makes the most sense for everyone

To be honest, college football in New England is not a big deal. Small, half empty stadiums, no passionate fan bases. UCONN football holds no attraction to any conference. The only plausible P5 conference would be the ACC as kind of a partner with Boston College but on their own they are about as appealing as 3 day old potato salad at a 4th of July picnic after sitting in the sun all day.

A private school should have no business blocking a public school

The ACC I think will add UConn and Cincy once the next wave of realignment comes in a few years. So don’t expect UConn to be indie long. Geographic divisions are too much to resist for the ACC.

Doubtful that the ACC would do this. They already have 15 schools in basketball.

6-30-19 It sure looks like the American is staying with 11 teams for 2020 in football and keeping other sports as is without U-Conn. I wonder what it will take for another Group of 5 team to be invited. BYU , who had their won deal with ESPN, does not seem interested.