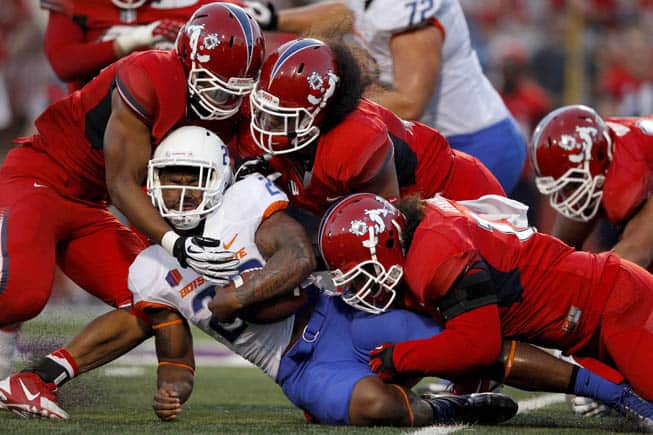 The Mountain West recently announced the conference’s 2014 Friday night schedule. Key conference and non-conference matchups will be televised on ESPN, ESPN2, ESPNU, and CBSSN. For true college football junkies, there’s nothing like getting a jumpstart on Saturday’s action with some historically high-scoring contests that will go a long way in determining who meets in the conference championship game on Saturday, Dec. 6, 2014.

The Bulldogs and Broncos met in September last year in a Friday night classic that saw Fresno State and Derek Carr eek out a one-point victory over Chris Petersen’s Boise State squad. Much has changed in just one year. While Carr prepares for the NFL Draft, Petersen is busy in Seattle as the newly crowned head coach of the Washington Huskies. It’ll be interesting to see how each team adjusts to these big-time changes.

After last year’s tussle, most experts expected a rematch in the Mountain West Championship game, but when Boise State slipped up in OT towards the end of the season at San Diego State, Utah State claimed the Mountain Division title a week later. This year’s fantastic mid-October showdown in Boise, Idaho could very well be the first of two matchups between the schools in 2014.

And then there’s San Diego State. After a brutal home-opening loss to Eastern Illinois in 2013, along with losses to Ohio State and Oregon State, the 0-3 Aztecs rallied nicely to win 8 of their last 10, including the Famous Idaho Potato Bowl. A win at Fresno State on Oct. 3 could give the Southern California ball club an inside track to the West Division crown. One thing the Aztecs will need to improve upon from last year is a 93rd-ranked defense gashed for 31.7 points per game.

Historically pass-happy BYU is coming off a 2013 campaign that saw the school ranked 10th in rushing at an impressive 267 yards per game. Ironically, it was the 339 passing yards by the Cougar’s QB Taysom Hill that propelled BYU to a 37-20 win over the Broncos a year ago.

Washington State probably wants to forget about the last time it faced a Mountain West opponent. Pirate-enthusiast Mike Leach and his Cougars had a commanding 22-point lead over the Colorado State Rams in the 2013 New Mexico Bowl. A few 4th quarter fumbles later, Leach’s squad was walking towards the locker room with a 48-45 defeat.

Washington State will attempt to get non-conference revenge versus a Nevada Wolf Pack team that finished uncharacteristically out of bowl contention in 2013 after the departure of longtime coach Chris Ault. The Wolf Pack simply must shore up a defense that ranked 104th in total points allowed last season, especially against Washington State’s free-wheeling QB Connor Halliday.

San José State makes its lone Friday night appearance against a Utah State team that has had the Spartans number over the past few years. The Aggies were the only thing standing between SJSU and a WAC championship in 2012, and last year the Spartans were thumped at home in the rematch, 40-12. Not only does Utah State looks to be strong again in 2014, but also as of this writing the Spartans have yet to announce who will replace record-setting QB David Fales.

UNLV ended the 2013 regular season with a pair of victories to become bowl eligible, including a monster 45-19 upset of San Diego State The late season surge placed the Rebels into a New Year’s Day Bowl game, the club’s first postseason action since 2000. This CBSSN early-season matchup pits UNLV against a Jordan Lynch-less Northern Illinois team looking to steal a victory in Las Vegas.

One word describes the Wyoming Cowboys defense in 2013: Leakage. The Cowboys sprung leaks all over the field last season, especially in the secondary, en route to giving up over 36 points per game. To help right the ship, the school hired Craig Bohl of North Dakota State fame. Bohl led his team to back-to-back-to-back FCS championships the past three seasons. He and his new coaching staff will get quite a challenge in early November from Utah State, especially with the return of pocket-escape artist Chuckie Keeton at QB.

The Ram-Falcon Trophy will once again be up for grabs when Colorado State travels to Air Force for the school’s 53rd all-time meeting (Air Force leads 31-20-1). While the Rams were finishing their season with a stunning bowl victory over Washington State, the Falcons were at home nursing the wounds of a 2-10 season, including zero victories in conference play.

Much like their military counterparts, Army and Navy, the Falcons were able to move the ball on the ground (262 yards per contest). The problem was actually putting the ball in the end zone. The offense was just 93rd in the country in scoring. When combined with a defense that gave up exactly 40 points per game, it’s easy to see why the Falcons missed the postseason for the first time in 6 years.

Great post…..and while I feel the SJSU- Utah State game should rank higher,the fact is the Aggies have owned the Spartans the past seasons. Both teams are coming off heavy losses but Utah State went bowling with the Spartans staying home…a huge momentum factor for USU. The starting QB for SJSU looks to be redshirt Jr. Joe Gray. Should be a good matchup…

The fact that SJSU at Utah St is a top 5 Friday night game for the MWC, shows how weak the list really is. Also, #7 Utah St. at Wyoming…ouch.

And, BYU, Washington St.,and Northern Illinois save the list from just being the Fresno St.-Boise St.-San Diego St. round robin, plus Colorado St.-Air Force.

Not so fast,Bradley….you are talking about two pretty strong Mountain West teams…while SJSU only finished 6-6,it did beat three teams in the conference that went bowling,including 16th ranked Fresno State. Utah State narrowly lost to Fresno but did beat a decent N.Illinois squad with a Heisman caliber QB. To simply dismiss this match-up means you need to watch the MWC more…

Except it was Derek Carr that eeked out that 1pt victory over Boise, not David. Though I.m sure David wished he had eeked out such victory back in 01.

Fresno State is easily the best team in the Mountain West

Fresno State is the best team in the west? They have shone that nothing works without Derek Carr. The defense did a terrible job against Nebraska. Also the offense only got 105 rushing yards. Yes Nebraska is a good team but it seems like Wyoming did just as good against a #2 Oregon team. I’m not trying to say that Fresno State isn’t a good team but they’re not the best in the west.

The Fresno State loss against San Jose State was a fluke, Fresno State had 6 starters that were hurt. The Dogs also had 2nd and 3rd string DB’s playing in that game which inflated David Fales numbers.

But SJSU had Tyler Ervin and Noel Grigsby injured as well

Very few programs would see an 8 win season as a disaster.
Keep in mind Coach H’s record as the mastermind of BSUs playbook that took home 2BCS wins and made Kellen the winningest QB in history as well as developing players like Clady.
Dont underestimate the Broncos. They wont loose many if any.