Should the CFP Committee consider intent in future scheduling? 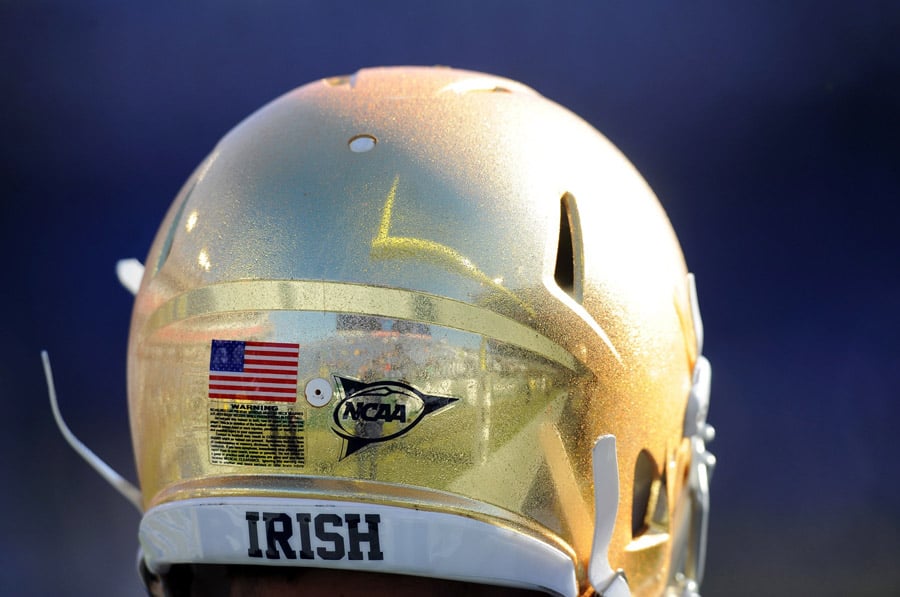 College football teams schedule so far out into the future that it’s impossible to determine the quality of opponents until game time finally rolls around. You can book a Top 10 team in 2012 and eight years later, in 2018, get an unranked opponent. Or, you can schedule a middle-of-the-roader who is magically No. 6 by the time you play them.

Coming into the 2017 season, Rivals’ BlueAndGold.com did a piece on Notre Dame’s director of athletics Jack Swarbrick, capturing his approach to football scheduling. In it, he acknowledges that the ultimate goal of booking opponents is wooing the CFP committee and thereby making the four-team bracket.

“We build and we give our team the platform to get to the CFP, and we want to have the best teams on it…”

Though it all makes perfect sense, engineering a schedule with the highest level of competition possible (especially given the freedom of a partial independent), Swarbrick’s next comment is thought-provoking.

“Intent is part of what the selection committee looks at. A program might be down by the time you get to it, but when you schedule that game – who were they, what does it say about your intent?”

Is he saying that, in the eyes of the CFP committee, intending to play a top-ranked opponent is the same as, or close to, actually playing one?

If that’s the case, then every Power 5 athletic director ought to be on the phone dialing up teams who are up presently and will hopefully crash in the next five to ten years.

Yes, let’s identify the programs whose success stands on shaky ground – like a coach who is older or who has bigger aspirations, or diminishing recruiting rankings, or potential NCAA violations – and schedule them in the future.

Because, well, the committee will understand, and give us credit for, trying to schedule up.

Will Alabama sustain its success after Nick Saban finally retires? What does it mean that Ole Miss’s team recruiting rank has slowly slipped from No. 7 in 2016 to No. 39 in 2017 to No. 27 in 2018? And what about the turmoil at Michigan State?

Though it sounds ridiculous, there is a part of Swarbrick’s logic that makes sense.

Was it Notre Dame’s fault that when, in August of 2010, it scheduled Texas to open the 2015 season that it was intending to play the 2009 version of the Longhorns? That UT team, the one it thought it was signing on with, went 13-1 and finished No. 2 in the final AP after falling to No. 1 Alabama in the BCS Championship Game. It was a far cry from the version of the Horns the Irish got five years after the fact, fresh off a 6-7 campaign (in 2014) and completely devoid of any mention in the Top 25.

If Swarbrick’s understanding of how the committee approaches scheduling intent is valid, then the Irish’s No. 8 slot in the final CFP rankings that season was due, at least in part, to the fact that they attempted to schedule a top-ranked team in the Longhorns.

Though the two schedules are far from an apples-to-apples comparison, FSU beat it’s two highest-ranked regular season opponents that year while Notre Dame lost to theirs. Was it the Irish’s intent to play a top-ranked Texas team that made the difference? And what would have happened if both teams had one loss and Notre Dame finished No. 4 in the CFP rankings and Florida State came in at No. 5, just out of the bracket?

The truth is, we’ll never know.

What we can be certain of is this – no where in the CFP committee’s selection criteria is “intent” mentioned.

Though strength of schedule is one of the four pillars of the protocol, no specific guidelines are offered for how difficulty is determined, and no guidance is given on “how to” build an acceptable schedule.

What is presented is an avenue for independent programs to earn a bracket spot.

The criteria to be provided to the selection committee must be aligned with the ideals of the commissioners, Presidents, athletic directors and coaches to honor regular season success while at the same time providing enough flexibility and discretion to select a non-champion or independent under circumstances where that particular non-champion or independent is unequivocally one of the four best teams in the country.

But again, this has nothing to do with intent, something that Swarbrick not just contends the committee should honor, but that they do use it as a factor in deciding which four teams make the CFP.

To look at it from another angle let’s take Alabama, who opens up against Louisville in Orlando this season. Three years ago, in August 2015, when the matchup was announced the Cardinals were a club that had posted a 32-7 mark in three seasons and had Lamar Jackson cued up. Speed ahead to 2018 and Louisville isn’t even mentioned in ESPN’s post-spring Top 25 and Jackson is off to the NFL.

So, when the dust settles on the 2018 season, based on intent should the Crimson Tide get full or partial credit with the CFP selection committee for opening-up with what was, when they booked them, a top-ranked opponent? The same acknowledgement that say Texas A&M deserves for actually playing Clemson in Week 2?

The truth is, top-tier, money-drawing programs like Notre Dame and Alabama will always get “extra credit” from groups of well-meaning experts fielding playoffs or selecting bowl teams. Subjective concepts like “intent” provide decision-makers with the necessary leeway to justify their subjectivity.

Think about it, if West Virginia tanks and falls from being a contender in 2020 and 2021 (ESPN has the Mountaineers at No. 11 in its post-spring Top 25) will Maryland get the same “intent” credit for scheduling the Mountaineers as fellow Big Ten member Ohio State would have?

The same theory applies to TCU who has Stanford slated for 2027. If the mighty Cardinal are unranked and struggling on the gridiron in nine years, will the Horned Frogs still get intent points from the committee that Oklahoma surely would?

Could it be that Swarbrick’s views on intent is yet another way for Notre Dame to try and assert that its 12-game schedule – as a quasi-independent – can match or trump the 13-game resume (which includes a league title game) of a Power conference champion?

Is this the “flexibility” that’s mentioned in the CFP selection criteria for independents?

Intending to schedule the best set of opponents possible is admirable, but it is irrelevant when deciding which four teams have earned the opportunity to compete for a national championship.

Unless there are more than 4 power-conference teams at the end of the season with fewer than 2 losses, this is just a topic for mid-season sports fan argument. The committee hasn’t yet chosen a team with 2 or more losses, but has chosen 1-loss teams with softer schedules. The clear message from the committee is: If you have 2 or more losses and there are at least 4 teams that don’t, you’re out, and we don’t care how difficult your schedule was.

A further question raised but not fully addressed by the article is whether the committee actually follows its criteria or simply makes a post hoc justification of the teams they choose. I would argue it’s consistently been the latter: the committee’s actual decision process seems to be: pick undefeated and one-loss p5 teams. If there are too many of those, remove the ones with the most recent losses until you have 4. As far as I know, there is no other method that accurately describes the 16 teams placed in the playoff thus far.

Unlike, say, the basketball committee, they don’t seem to emphasize non-conference SOS. In fact SOS in general seems to be irrelevant in their selections and just a stick to beat the g5 with.

The committee has never really spoken on what exactly Strength of Schedule is or when it is measured. I really wish the committee would (1) put more value to the strength of schedule that the school actually can control, (2) define it specifically.

1. Believe the most important is what the strength of schedule is when at the time of the ranking. Will you get 4-9 Michigan St or 9-4 Michigan St? well it matters. The committee should factor in if you beat Maryland with it first string QB or if you beat them with the 4th String QB after the others got hurt, but that is way more important than what you thought they would be when you scheduled them. If you scheduled FAU 5 years ago you get credit for what they are now, not the awful team you thought they would be.
2. It is important to know how good they are at the end of the season, not the beginning. If you played and beat Florida St last year in September you thought that was awesome, but wait they had six loses in 2017, not so impressive.
3. Minnesota in 2018 and 2019 have not scheduled an out of conference Power 5 team and in 2020 only have BYU who people debate if they are Power 5. Even if somehow Miami of Ohio or Georgia Southern play their way into the Top 25 teams in the country, Minnesota and other offenders of this should be shunned by the committee.

Although your point has been correct there was almost a very big exception last year. Week 14 of the rankings, before the conference championship games had 10-2 Auburn at number 2 and 12-0 Wisconsin at #4. Clemson and Oklahoma each had one loss at #1 and #3 respectively. Alabama was one loss (to Auburn) 11-1 at #5 followed by Georgia 11-1 #6 (also lost to Auburn 2 weeks previous). Wisconsin had a soft schedule that year, and in a way Alabama did to a lesser degree. If Auburn had beat Georgia in the SEC championship game it would have stayed a #2 seed, Wisconsin also lost the Big 10 Championship.

Actually I am a quality wins type first and would have applauded the SEC Champ Auburn in the tournament.

Simple……….stop the scheduling decades in advance. Schedule teams no more than 4 years from the end of the season.

Teams will never do that though, unless the NCAA mandates it. To me, it’s not fair to teams like Notre Dame & Alabama who try to schedule top notch OOC competition, and then have it come out flat. Nor do I think teams should be unexpectedly rewarded when they schedule a team like FAU before they hired Kiffin. I believe teams should get partial credit when scheduling.