SEC to Decide on Nine-Game Football Schedule in May 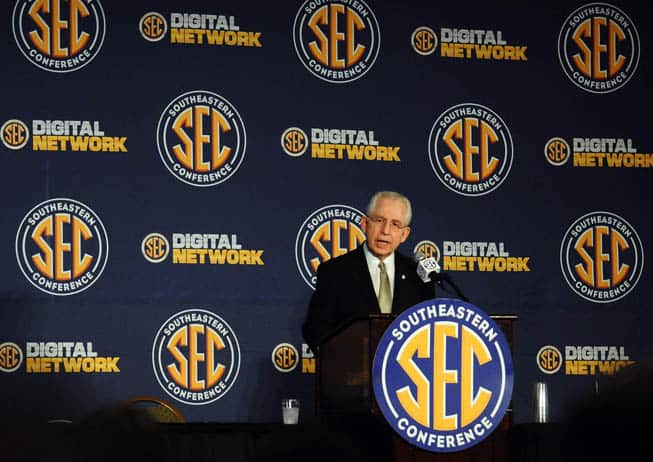 The SEC has been debating moving to a nine-game conference football schedule or remaining at eight games for what seems like a few years now.

But the discussion will finally be over in May by the time the SEC Spring meetings in Destin occur, SEC commissioner Mike Slive told AL.com.

“The important thing is we’ve got a target that we have to shoot for,” Slive said. “The conversation does get all over the place, but the timeframe is finite, not infinite.”

Both the nine-game schedule and permanent rival issues are being reviewed in preparation for the SEC Network, which launches on August 14, 2014, and the new College Football Playoff after the conclusion of the 2014 regular-season.

The SEC is committed to an eight-game, 6-1-1 format schedule through the 2015 season. The 2015 SEC football schedule is also set for release around the same time, according to UGA athletics director Greg McGarity.

For 2016 and beyond, most SEC athletic directors and coaches favor remaining with an eight-game schedule and allowing schools to schedule tougher in the non-conference at their own discretion.

But with the College Football Playoff right around the corner, the SEC is getting outside pressure to play a nine-game conference schedule as two other “Group of Five” conferences already do — Big 12 and Pac-12. The Big Ten moves to nine-games in 2016.

The final decision, Mike Slive said, will be made by presidents and chancellors in concert with their athletic directors.

As previously mentioned, the permanent rivals are also being reviewed. However, the feeling now is that those rivals will remain in place.

“If I’m at a school with a permanent opponent that I like and it’s easier than playing Alabama, LSU or Auburn, why would I want to change?” said Alleva. “You vote for your best interests, which is contrary to what this league usually does. Everybody is supposed to vote for the best interests of the league. I think we’ll probably keep permanent opponents because nobody will have the guts to change it.”

shouldn’t even be a question. 9 games is the answer. when you have 14 teams and a 6-1-1 format, you see the same 7 opponents every season and only see the other 6 TWICE IN TWELVE YEARS.

I think the (6 division teams-1 permanent rival -2 other division teams) nine game format with the previously mentioned SEC/ACC rotating annual game is the best solution for a balanced schedule for both SEC and ACC (with Notre Dame). That leaves two games – one for non-conference rivals (Florida/FSU, GA/GA Tech, Clemson/SC, etc) and one for FCS or Sun Belt school game to round out the season.

I think the (6 division teams-1 permanent rival -2 other division teams) nine game format with the previously mentioned SEC/ACC rotating annual game is the best solution for a balanced schedule for both SEC and ACC (with Notre Dame). That leaves two games – one for non-conference rivals (Florida/FSU, GA/GA Tech, Clemson/SC, etc) and one for FCS or Sun Belt school game to round out the season.”

Why would Fl./FSU, Ga./Ga. Tech, SC/Clemson, Ky./Louisville, (Vandy/Wake Forest?) only have 1 game to work with? This slot would be everybody’s 10th game leaving 2 spaces for whomever.

The Florida-FSU, Georgia-Georgia Tech, etc. games are already SEC-ACC matchups. So, everyone in the conference would have two games for FCS, Sun Belt, or whoever they want to play.

If the SEC were a weaker conference like the Big 12, Big 12, PAC16 or ACC then I would agree they should play 9 games. But what will happen is we’ll end up with a 1 or 2 loss SEC team that should play for the national title but left out because the other conferences are pale in comparison to the SEC and play patsy schedules two weaker yet undefeated teams will end up in a questionable national championship game.

But now you’re gonna have people saying “why should we give the SEC a slot when all other conferences have 9 games? that’s not a level comparison”.

And, this is why the CFP will increase to 8 teams in short order….

The SEC is going to have to move up to a nine game schedule for several main reasons one in 2016 Pac 12 Big 12 and Big 10 will have 9 game schedules which as SouthernBoiSB stated will hurt the SEC in playoff consideration for not playing 9 games when the others have played one more conference game the other is the SEC network for more TV revenue and the other final factor is the time between playing the other division. Case in point Georgia has not played Alabama in Tuscaloosa since 2007 and is not scheduled to play them this year either thats makes 8 years by 2015 this is ridiculous. The 6-1-1 format for 14 teams is not working and the SEC is going to be outside looking in if they don’t fix this problem in the future with not adding a 9th game to the schedule. I believe the BIg 10 will add to more teams to go to 16 in the very near future as they are already looking at other eastern TV markets and the SEC has to keep pace in order to compete in this new playoff format or be left out. THis is not like the BCS system where they got into the final championship game for last 8 years and won 7 of 8 of them. Hopefully they will fix this mess in scheduling and games to adjust and keep pace with the other conferences.

The main reason why the SEC should go to 9 games and the SEC and ACC should develop a schedule affiliation is all about TV exposure and $$. The 9-game schedule will increase the chances to add games like LSU-South Carolina and Alabama-Georgia that will add TV inventory.

Likewise, the chance to have Virginia Tech-LSU, Miami-Alabama, and even Arkansas-North Carolina type matchups will add more quality TV inventory.

Plus, SECS season ticket holders are growing restless about the home schedules that include FCS and Sun Belt opponents.

The catch to that is some people think the SEC West would do better going against the Big 12 because of closer proximity. For example, would you watch TA&M/Texas or Arkansas/Syracuse?

I always find it funny that LSU never complained about Alabama until Alabama was good—and suddently now, they don’t want Florida on their schedule. Florida in the 90’s played Tennessee and FSU every year, and didn’t complain. Likewise, they played Alabama in 2010 and 2011 and now have to play them in 2014 (before UGA or USC, mind you) and never complained. LSU needs to get over itself about its DIVISIONAL opponent and suck it up.

Well said. LSU NEVER talked about unfair schedules when TN automatically put up a “W” on the Alabama game in the 90’s. & now he’s talking about cross-division perm. games like Ole Miss–Vanderbilt and Mississippi State–Kentucky? Guess he doesn’t remember these perm. games:

If you want unfair, everybody but 4 schools had an easy partner (Florida, Tennessee, Arkansas, & Auburn). Didn’t hear any whining against playing Kentucky.

The way I see the solution to this mess with the 6-1-1 format if they stay at 8 games for the divisions and the cross permanent rivals being kept is to move Alabama and Auburn to the East, this will save the Alabama-Tennessee matchup, and Auburn-Georgia game by having them in the East Division, as a few AD’s have mentioned as a possibility, move Missouri which is geographically West and Vanderbilt to the West, now Mizzou and A&M can renew their old Big 12 rivalry, this would eliminate the crossover issues and allow the East and West to play more frequently every few years. The games that Slive does not want to mess with are the Bama/Tenn game and the Auburn/GA game which if they Bama and Auburn were to be moved east would retain those games as well as keeping the Iron Bowl rivalry with Bama and Auburn intact as they would still be in the same division. IF Auburn is to be considered moved to the East as THE AD’s have looked at Bama should be moved as well. If Bama now needs a crossover game then let it be LSU to retain that rivalry and give Florida someone else to play on a yearly basis from the West or rotate the West teams around and leave just the Bama/LSU game as the only crossover game as the PAC 12 does with just a few schools not the whole conference. However if they go to 9 game slate and move Bama and Auburn to the East this would definitely enhance the schedule for more West teams played more frequently.

If the SEC wanted to get a jump on all the other conferences just add 2 more teams from large TV markets as they are looking into VIrginia and the Carolina markets, and go to a 16 team format as the Big 12 has to now add 2 more teams for a conference championship game as the NCAA denied them permission to hold one with the 10 teams they currently have if the BIG 12 adds 2 more teams probably from the ACC or elsewhere the DOMINO effect will cause the other leagues to add more teams as Jim Delaney when asked at the BIG 10 Basketball tourney about more expansion he stated that we are seriously looking into this for the very near future and he did not rule out a 16 to 20 team league this would cause major changes in the conferences and more shuffling. Its all about $$ with the TV revenues BIG 10 Network and the New SEC Network starting in August of 2014 of this year. Delaney has been in talks with ACC schools for more expansion and would buy out the Grant of RIghts that the ACC has in place to allow this to happen as its as I stated is about TV Revenue and $$$.