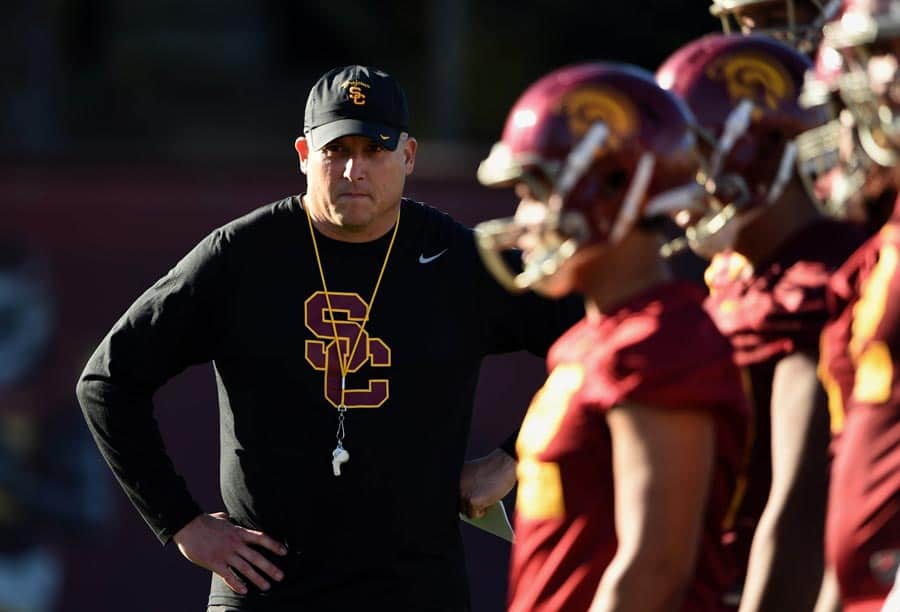 What is the ultimate goal of a Power program? Bowl eligibility? A division or conference title? A coveted spot in the CFB Playoff?

Regardless of what they’re shooting for, the following teams will have a competitive disadvantage in 2016 because of their non-conference schedule.

Where most Power programs have one Power opponent scheduled out of league play, these select few have slated two. It doubles the chances that they’ll carry one extra loss to the finish line.

In order for Clemson to make it back to the CFB Playoff it will have to beat two SEC teams along with its regular ACC slate.

In fact, you have to go all the way back to 2009 to find a Clemson schedule that didn’t feature two Power teams out of ACC play. That year they added No. 15 TCU, still a Mountain West member at the time, to its annual meeting with South Carolina.

Duke’s run of four-consecutive bowl appearances is the first-ever in program history. Getting to five will be more difficult with back-to-back road trips to the Midwest to clash with Northwestern (Sept. 17) and Notre Dame (Sept. 24).

The Blue Devils haven’t faced two Power teams out of ACC play since 2008, when they played Northwestern at home and traveled to Vanderbilt. They lost to the Wildcats (24-20) and edged the Commodores (10-7) on their way to a 4-8 finish.

Florida State last had three non-conference games with Power opponents in 2014 when it opened up vs. Oklahoma State in Arlington, Texas and then hosted Notre Dame and Florida.

That’s also the last year the Seminoles won the ACC and earned a spot in the CFB Playoff.

Georgia scheduled two Power teams out of SEC play as recently as 2014, when it opened up at home vs. Clemson and then closed out the season with its annual clash vs. Georgia Tech.

That also marked the Bulldogs only Top Ten finish—the AP had them at No. 9 in its final poll—since 2013.

After posting an 11-3 record and earning a trip to the Orange Bowl in 2014, Georgia Tech plummeted to a 3-9 mark last season, breaking an 18-season bowl streak.

What didn’t help was the addition of Notre Dame to its annual meeting with Georgia. The Yellow Jackets did play BYU as recently as 2012 and 2013, technically a Power program according to the ACC, but hasn’t played two opponents who are actual members of a Power league since 2011, when it hosted Kansas and Georgia.

After a two-year hiatus, Michigan State and Notre Dame briefly renew their long-standing rivalry with a home-and-home slated for this season and next.

BYU is considered a Power opponent by the Big Ten, making Michigan State the only team in the conference to have two such non-league games.

The last time the Spartans faced two Power teams was in 2008, when they opened the season with a loss at California and then beat Notre Dame in South Bend. They went 9-4 that year including a loss to Georgia in the Capital One Bowl.

Not only do the Tar Heels have an SEC and Big Ten foe scheduled in 2016, they get them both on the road in the first two weeks of the season.

North Carolina also double-dipped last year, losing to South Carolina in the opener and picking up a win two weeks later vs. Illinois. It was the first time since 2003, when the Tar Heels lost at Wisconsin and vs. Arizona State at home.

Oregon scheduled two Power teams out of conference as recently as 2013, when it won 59-10 at Virginia in Week 2 and then equally blew out Tennessee in Eugene (59-14) the next Saturday.

Before that, it was 2004 when the Ducks opened up the season with back-to-back losses vs. Indiana and at No. 2 Oklahoma. With a 5-6 finish, that was also the last Oregon team to miss out on bowl action.

After playing regularly from 1905-2000, Pitt and Penn State renew their in-state rivalry in Week 2. If that weren’t enough, the Panthers travel to Stillwater the next weekend for a first-ever clash with Oklahoma State.

Pitt doubled-up as recently as last season when it lost to Iowa early and then fell to No. 8 Notre Dame in November.

Stanford adds a visit from Kansas State to its annual meeting with Notre Dame in 2016. It’s the second consecutive season for the Cardinal, who traveled to Northwestern on top of hosting the Irish last year.

Prior to that, it was 2012 when Duke visited and Stanford hit the road to play Notre Dame. Is it any coincidence that 2015 and 2012 are also the only two seasons in the last five that the Cardinal hit 12 wins?

Texas’ games with Notre Dame in Austin and Cal in Berkley are both the back end of home-and-home series that started last season.

Before that, it was 1999 when the Longhorns last doubled-up (not counting a series of games over the years vs. BYU, a non-Power foe according to the Big 12). That year they opened the season with back-to-back games vs. NC State (a loss) and Stanford (a win). The team finished 9-5 and ranked #21 after a loss to Arkansas in the Cotton Bowl.

Notre Dame is the only non-Power conference member that the Big 12 has labeled as a Power opponent.

Grading UCLA’s non-conference slate is tricky because of BYU, a program that the Big Ten, ACC and SEC have all tagged as a Power opponent. The Pac-12, on the other hand, hasn’t handed down any scheduling mandates, so BYU doesn’t carry any label other than “non-conference” opponent.

In any case, in this instance we’ll give UCLA credit for technically carrying two Power foes in 2016. The last time the Bruins faced the same challenge was last year when it opened up vs. Virginia and then hosted BYU. Before that, in 2014, it was Virginia and Texas.

Perhaps the toughest non-conference slate in all of college football in 2016, the Trojans get two teams that will start the season in the Top Ten.

Love them or hate them, USC will earn any hardware it is awarded this year.

The Trojans played two Power teams out of Pac-12 play as recently as 2014, when they lost at Boston College and trounced Notre Dame 49-14.

Another team (like USC) that will have to earn its wins out of conference the hard way, Virginia Tech is set to play two Power opponents that ESPN has in the Top 11 in its post-spring Way-Too-Early Top 25.

On top of that is East Carolina, a team the Hokies have dropped two straight games to.

The last time Virginia Tech doubled up was last season when it opened up with a loss to No. 1 Ohio State and then picked up a win at Purdue in Week 3.

Note: West Virginia plays both Missouri and BYU this season. Since the Big 12 does not consider BYU a Power opponent, the Mountaineers technically do not qualify for this list.

By your standard, Oklahoma would have doubled its chances for an out of conference loss by opening against Purdue instead of Houston.

bingo!…such a silly article it defies description. by its same logic North Carolina’s scheduled would have been twice as easy if they’d replace Illinois with Boise State

By SEC standards, West Virginia has two with Missouri and BYU on the schedule.

By Big Ten standards, Temple has three with Connecticut, Cincinnati, and Army.

This is another example of how ESPN can publish really stupid articles. As Greg pointed out, there is a really good chance that OSU or OU will lose one game out of conference and so will Wisconsin of LSU. But, even then, the article was pointless. There is an excellent chance that Power teams will lose games this year. Probably next year too.

Of course, there is always the chance that I am an idiot and so used to reading ESPN stuff that I thought this was just another ESPN article. Well, it’s still pointless.

IMO BYU does count as a P5 as almost all P5 leagues have named them as one!

The title of this article should have simply identified teams playing 2 OOC games with P5 teams.

For a seven teams on this list Michigan State, Texas, WVU USC UCLA Oregon and Stanford that will play a total of 11 games with P5 teams.

In other words the 25 P5 teams playing only nine or less (Boston College) will be at a competitive advantage over those teams playing 10 or more regular season games with P5 teams.
Who are the 25 teams? ND and Baylor are among the 25 and no matter what can not play a 10 game with a P5 team in a CCG. Others who play only 9 regular season games with P5 teams: WSU, Purdue and Maryland
In the ACC: BC, Miami Louisville, Syracuse NC State Wake Forest.

I can pretty much assure you neither ESPN of CBS will bring up this issue as overall it is an issue the playoff committee should take into consideration, like they did with the Big12 not having a CCG(2014) and UNC playing 2 FCS teams in 2015, even though UNC played 10 games with P5 teams.