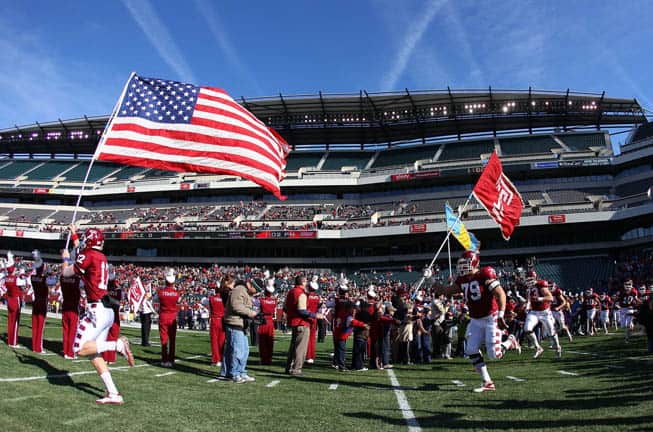 With Notre Dame set to begin playing five football games against ACC teams beginning in 2014, the Irish have been busy altering their future football schedules to accommodate the extra games.

Temple’s interim athletic director Kevin Clark confirmed the move of the Notre Dame game during an interview with Bill Evans of OwlsDaily.com.

The Fighting Irish now only need to cancel or postpone one more game to get their 2014 schedule down to 12 games. The remaining schedule move will likely affect either the Rice, Purdue or Northwestern game.

Earlier this year, it was reported that Notre Dame was going to drop a road game at Arizona State from their 2014 schedule. But the two sides were able to work out an agreement to save the 2014 game, although a 2017 match-up was canceled.

With Temple added to the 2015 schedule, Notre Dame now has 12 games for that season barring any other moves or cancellations.

The addition of Notre Dame to Temple’s 2015 schedule gives them their four non-conference games. The Owls are also scheduled to host Penn State and travel to UMass and Charlotte.

I’d say postpone Rice since the other games are against bigger schools.

Kind of an unrelated comment, but it seems me one answer to the NCAA “woes” would be to pass legislation that would allow for 13 game regular seasons. That would allow the 9 game conference seasons to come on board (which I oppose, I think it’s overkill, but we’re going that direction now it seems) but still allow 4 non cons. That would allow more non-con competition (which I think is good for the game) and possibly let schools still schedule an FCS program, if they wanted.

Also, I can’t stand conference title games, eliminating them would be my next step, but that’s another post.

I like that idea, but only if it also carried with it a rule that capped true home games at 8 per school.

It would be tough without lengthening seasons. 5 out of every 7 seasons are only 14 weeks long so schools in 12 tema leagues would need to schedule 13 games in 13 weeks. Doable with co-operation but the way school turn on one another and back out and buy out of games, it would not work.

ND could cancel the game with Rice, and Rice would be available to TAMU.. TAMU has an open date, and looking at TAMU OOC scheduling Rice would fit right in and maybe even improve the TAMU OOC SOS. This year TAMU plays…Rice, Sam Houston, SMU and UT El Paso. In 2014 TAMU has Lamar, SMU and LUM on the OOC schedule. Heck TAMU might even be willing to pay the ND expense for canceling the 2014Rice game.

TAMU has an OOC schedule set up to insure they can get into a bowl.

TAMU would be better off scheduling SHSU again to boost their SOS as opposed to Rice.