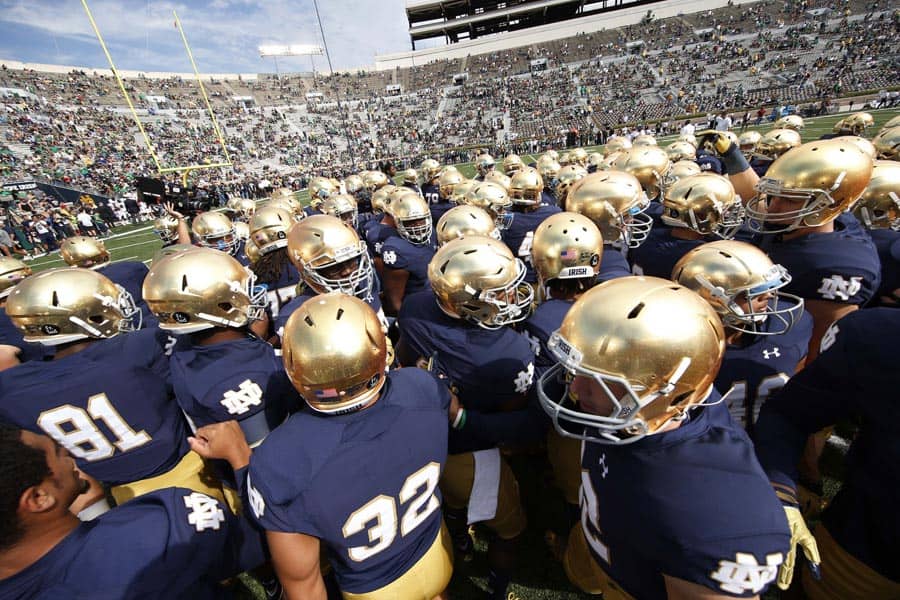 The Notre Dame Fighting Irish have announced kickoff times for their home football games in 2016 and their “Shamrock Series” contest against Army.

Notre Dame’s “Shamrock Series” game against the Army Black Knights will be played at the Alamodome in San Antonio, Texas on Saturday, Nov. 12. The game will be televised by NBC at 3:30pm ET.

Two Fighting Irish home games in 2016 will be televised in prime-time by NBC at 7:30pm ET — the Sept. 17 game against Michigan State and an Oct. 15 matchup with Stanford.

The Fighting Irish will also take on the Navy Midshipmen on Nov. 5 at EverBank Field in Jacksonville, Florida. That game is set for 11:30am ET on CBS.

Kickoff times for road games at Texas, Syracuse, NC State, and USC will be announced at a later date.

Why is it NBC, CBS and other that don’t have back to back games are start at 3:30 eastern? Why not move it up or down a little so all games don’t start and end at same time?

I don’t understand this sentiment. I do not like games that start at off times (5:30, 6, 9) because it’s harder to keep up with those games than it is games with synchronized starts, because you know all games in the 12, 3:30, and 7/8 window are around the same stage.

Because all games don’t end at the same time. It provides a buffer, allows the audience to get a little break if there’s no OT, and provide an update show for the duration between games.