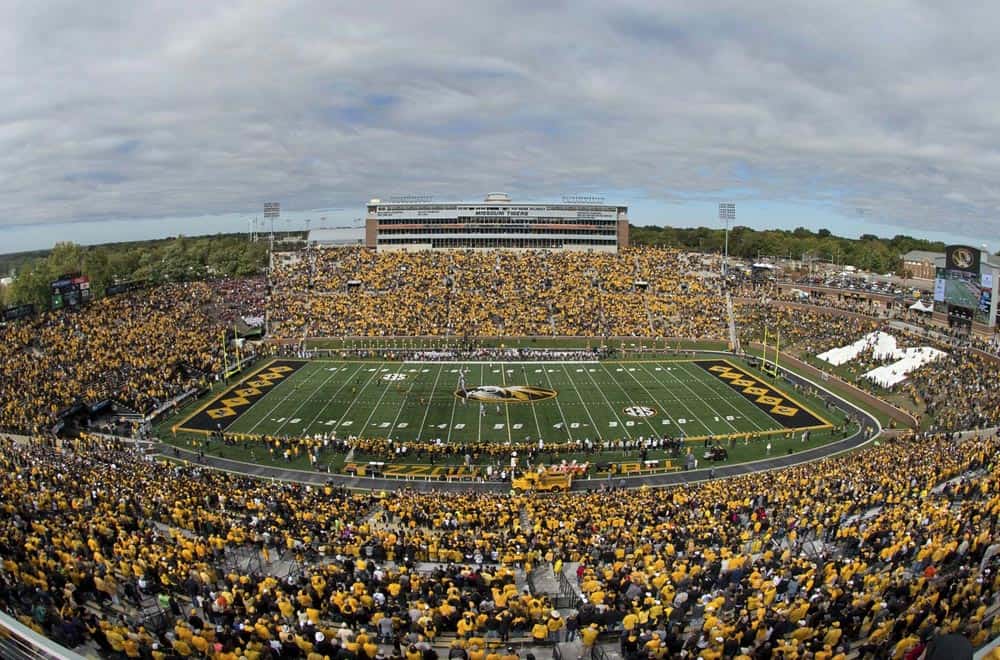 The Missouri Tigers have added future football games against the Troy Trojans and the Miami (Ohio) RedHawks, according to their official website.

Missouri will host Troy at Faurot Field in Columbia on Oct. 19, 2019. The game will be the fourth matchup between the two schools. Missouri currently leads the overall series 2-1.

The addition of Troy tentatively completes the non-conference schedule for Missouri in 2019. The Tigers are also slated to visit Wyoming (Aug. 31) and host West Virginia (Sept. 7) and Southeast Missouri (Sept. 14).

In SEC play in 2019, Missouri is scheduled to host Florida, South Carolina, Tennessee, and Ole Miss and travel to Georgia, Kentucky, Vanderbilt, and Arkansas.

Missouri’s website also indicates that they will travel to face the Miami (Ohio) RedHawks at Yager Stadium in Oxford on Sept. 13, 2025.

Either the location of the game is an error, or the game is likely part of a home-and-home series that will conclude in Columbia sometime after 2025. We’ve reached out to both athletic departments for additional details.

Missouri and Miami (Ohio) have met twice on the gridiron and both games were played in Columbia. Mizzou was victorious in both contests, winning 51-13 in 2010 and 17-6 in 2011.

Great games! This is exactly who we all wanted Missouri to play: Troy and Miami of Ohio You know what, let’s just send them straight to the BCS bowl game. Just by being part of the SEC, they should play in the best bowl game. They don’t need to play 10 Power Teams like everyone else. Just by dreaming about playing the mighty SEC, they deserve to play 3 cupcakes. It only makes sense.

Per the current schedule, P5’s which do not have a P5 OOC opponent AND have completed their schedules. For this analysis BYU considered a P5 program. (strongest scheduled OOC opponent shown in parentheses):

Per the current schedule, P5’s which do not have a P5 OOC opponent AND have NOT yet completed their schedules (BYU considered a P5 program):

Of course the P12, B1G and B12 play 9-game conference schedules.

Oh, come on Maverick, you know there is a state law that forces Missouri to play Troy!

See, that’s why your opinion is invalid. You honestly thought there was a state law that forced Georgia to play Georgia Tech, Florida to play Florida State, Clemson to play South Carolina and Louisville to play Kentucky. You said that. You truly believed that.

None of you complaining or whining has any merit anymore. Not that it did to begin with.

joe,
Yeah, I stretched the truth into a steaming pile of you know what. However, there was talk about it. Even a senator/congressman drew up legislation, but it didn’t pass the state senate. See these links:
For Clemson-USC: http://www.postandcourier.com/article/20120208/PC1603/302089932
For Kentucky-Louisville: http://www.kentucky.com/news/politics-government/article44148582.html

Did they pass? No. But it just goes to show they will likely never get rid of these games even when the eventually move to a 9 game conference schedule like everyone else. Don’t delay the inevitable, SEC and ACC fans. Just accept that it will make college football great again, for everyone. Also, I’m pumped for this opening weekend. More games like this opening weekend 2016 and less like this Mizzou cupcake game.

College football is already great. If anything makes it ‘not great’ it would be uneducated fans who think all Power Five teams are Oklahoma and complain every year about how the SEC is overrated only to watch them beat all of your teams more than not.

If the SEC were that good, they would gladly play more better OOC games. Maybe the 8 plus 2 model (if the SEC schedule is oh so hard)? Prove your worth instead of playing high school teams like the Dillon Panthers.
Your head is so far detached from reality, you don’t understand your ridiculousness. Fans would gladly say “SEC is best” if they actually scheduled like and beat power 5 teams on the road. Instead, you just listen to ESPN (whose tv contract makes it hard for them to be unbiased in their reporting). Get a clue and watch Fox Sports One instead.

Other conferences need the OCC because their conference schedule is so weak. That’s the difference.

Maybe we should get someone to pass a state law that says terrible teams get kicked out of these other conferences so teams like Oklahoma and Ohio State stop getting the benefit of playing in conferences that are awful.

the Miami (O) game has to be more than the one game in Ohio. Miami damn lucky to get a team like Mizzou to come to their 26,000 seat facility.

Missouri was supposed to play at Miami of Ohio a couple years ago but when they moved to the SEC, that game got delayed. That’s why that’s on the schedule.

Thanks. I’m looking into it further to see which season that was.

Wish they would make this a 1 and 1 with TROY. GO TROY!