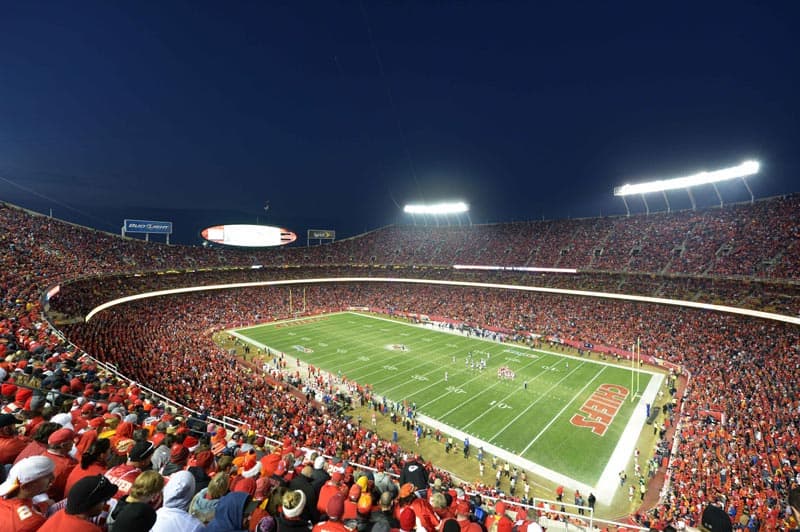 Mizzou and BYU will play at Arrowhead Stadium in 2015. (Kirby Lee-USA TODAY Sports)

The Missouri Tigers and the BYU Cougars have scheduled a two-game football series for 2015 and 2020, the two schools announced today.

On Nov. 7, 2020, Missouri will travel to face BYU at LaVell Edwards Stadium in Provo, Utah for the final game of the two-game series.

The 2015 game will be the second meeting between the two schools. BYU won the first matchup 21-17 in the 1983 Holiday Bowl in San Diego.

The addition of BYU completes the 2015 football schedule for the Missouri Tigers. Other non-conference games for Mizzou next season include vs. Southeast Missouri State (Sept. 5), at Arkansas State (Sept. 12), and vs. UConn (Sept. 19).

In 2020, Missouri is also scheduled to visit the Memphis Tigers on Oct. 3. Missouri needs two more non-conference games for that season, and one needs to be a Power Five opponent.

“We are very pleased to have this opportunity to bring Mizzou to Kansas City. Having a presence there is very important to us, and this game underscores our commitment to doing just that, as we indicated when we moved to the Southeastern Conference,” Missouri Director of Athletics Mike Alden said. “This is an exciting, high-profile game for our fans, and we’re looking forward to working with the Kansas City Chiefs and the KC Sports Commission. We know from past experiences that they will do an outstanding job of making this a special event for Tiger fans.”

BYU has again made a change to their 2015 schedule with the addition of Missouri. The Cougars were previously scheduled to play at UNLV on Nov. 14. That game will be moved to either 2016 or 2017.

“It’s a great opportunity and challenge for our football team to play such a fine school as Missouri,” said BYU director of athletics Tom Holmoe. “They are a new SEC school with a rich football tradition going back to the Big 12. It will also be exciting for our team to play at Arrowhead Stadium in a region of the country where we haven’t been in a while.”

BYU scheduling is not smart. They seem to think they are better than they are as they have scheduled 4 P5’s on the road for 2015. Nebraska, UCLA. MIchigan, Mizzou. Nebraska and UCLA are top 25 teams this year and likely next since they return alot of key players.

The only way that BYU will get any recognition is if they play big games and win. It would be foolish not to schedule P5’s. I would much rather have a potential win or suffer a BYU loss to Missouri than have three wins over UNLV, Savannah State, and Middle Tennessee.

“BYU scheduling is not smart.”

Yeah, bringing an SEC team into Lavell Edwards Stadium in November is dumb and something fans won’t be interested in watching.

Sounds like a smart move to me. It is true that they might lose any game they schedule, but it never hurts to have a solid SEC team play BYU twice in November (and one in LES).

Michigan is definitely not a top 25 team.

BYU simply cannot turn down a Power 5 home and home that has both games in November. That is exactly what they need,

This is a good match up. Hope that BYU is all healed up by next year (Taysom, Williams, Kafusi, Hine, Johnson, Kurtz…). They will all be needed.

By then the SEC will accept BYU as a p5, so the Tigers won’t have to find another ‘p5’ game.

I’ll try to find the URL again but a Missouri beat writer had some great background from the Missouri Associate AD. One insight was that the 2015 switcheroo involved 5 teams and ESPN. My understanding is that there is a BYU opponent that will be moved from BYU’s schedule to UNLV’s to ease the schedule. (While that is likely Idaho State, it could also be forgotten-about Southern Miss, who is looking for road pay cheques.) With ISU off BYU’s schedule, my impression was that Missouri was helping BYU find a 12th opponent. BYU has some future home vs. road imbalances, it would likely be 1 and none. So perhaps a fave Missouri FCS team…or perhaps Southern Miss here too as will take road games. But anyway it seems:

ISU may be at UNLV
FCS other than ISU at BYU

USM still pushing games versus BYU out as far as Notre Dame is.

I don’t about who was doing who a favor. Mizzo desperately needed a game for next season. The deal previously was reported as a home-and-home-and neutral three game series. So good for BYU and its fans and smart scheduling by Mizzo as well.

The writing is on the wall for BYU to be considered a “P5” caliber program and other programs will schedule BYU accordingly. The Pac-12 is already scheduling BYU as such. Good to see some non Pac-12 programs grow in the west. (Will see how Boise St and Colorado St proceeds or recedes).

Now that the ND-ACC scheduling arrangement is known thru 2025, BYU and ND should be able to finalize scheduling a two home-and-home series.

Notre Dame doesn’t do home-and-home series with most teams. Their scheduling agreement with BYU was 2 two-for-one’s. Notre Dame has already had their two home games done on the first agreement. They will have to play at least one at BYU, probably before the 2020 season. Tom Holmoe has said he is willing to let the second two-for-one be pushed past the date of the contract, but he doesn’t want to cancel it.

BYU and Colorado State: the two natural additions to the Big XII. Then they’re both P5.
Both have the enrollments, endowments, and alumni base to support it.
Boise St and Cincy maybe later. Need more alumni, need more endowment.

They talked about this yesterday on Countdown to Kickoff and on the ESPNU broadcast. Both agreed the thing that would currently keep Colorado State out is their football stadium. However they said Colorado State, UCF, or USF would likely be the best bets if neither TCU nor Baylor make the College Football Playoff this season and the Big 12 looks to expand to 12.

Southern Miss already has 2015 road game pay days scheduled against Missi St and Nebraska. Or maybe you were referring to another season?

It appears BYU is working its way up to scheduling 8 P5, 3 G5 and 1 FCS program each season. Good job BYU AD. Need to turn a few more P5 home-and-homes and get the ND home-and-homes on the schedule.

What a great move for BYU. Huge schedule next year and what a win to get a good game in November. I hate to complain, but couldn’t we have mixed up home and aways. Little better in October? 4 home games in as row? With that said, so nice to have a game to look forward to toward the end of the season, followed by a great final game against Utah St. One of the better Novembers since independence began. Can’t wait for some more of these bigger teams to come to Provo.

Love it. Waiting to hear who the 12th game will be. Could be Boston College or UCF.

One underappreciated win by BYU AD Tom Holmoe here – he has pushed games against the three 2015 opponents (USM, ISU, UNLV) who would be the biggest SOS drags into the future, including having two of three play each other instead.