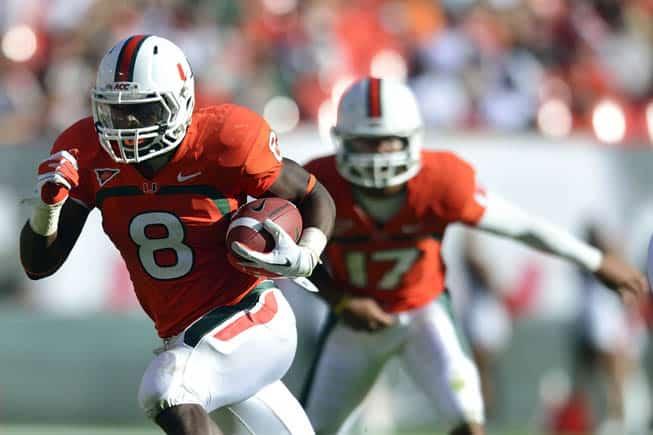 Earlier this week it was revealed that the Miami Hurricanes will likely play a home-and-home football series with Arkansas State beginning in 2014, though the Arkansas State Sports Information Director released a statement on Twitter making it known that nothing is official yet.

On Friday, Barry Jackson of The Miami Herald also reported that the Hurricanes are finalizing a home-and-home series with Southern Miss. The first game of the series would be played in Miami in 2014.

Currently, the non-conference schedule for the Hurricanes in 2014 tentatively includes a visit from Florida A&M along with a trip to Lincoln to play Nebraska.

Memphis was on the slate for 2014, but the Herald reported late last year that that series would be canceled.

Adding Arkansas State and Southern Miss would round out Miami’s 2014 non-conference schedule at four games.

The Hurricanes and Golden Eagles have never met on the football field, and an exact date for their first meeting has not been released yet. The Memphis series was scheduled for September 13, 2014 at Sun Life Stadium, so that could be a possibility.

As for the future, the Hurricanes are scheduled to finish their home-and-home with Nebraska in Miami in 2015. Also, Miami will begin the first half of a home-and-home series with Toledo.

The Herald also reported on Friday that Miami is in “advanced talks” with Penn State for a home-and-home series. If you’ll recall, news of this series was first reported by the paper in April. At that time, they stated a neutral site game was a possibility.

I really wonder why Miami would chicken out of the Memphis game to play two weaker teams? They were really afraid of a loss and we all know they are afraid of a losing season so they are scheduling cream puffs.

Two weaker teams than Memphis? Really? Arkansas State has gone 20-6 and won the Sun Belt the last two years and beat Memphis both years. Even with the horrendous year USM had last year, they are still the better program than the Tigers. Memphis is also 9-39 since 2009 so I highly doubt they were afraid of a loss to them.

Arkansas State has beaten Memphis the past 2 years. Losing Memphis and picking up Arkansas State would be an upgrade to UM’s schedule. The Sun Belt has been strong against non conference foes of late.As an example from the ACC
, MTSU destroyed Georgia Tech last year then MTSU got hammered by Arkansas State the last game of the year 45-0.

OK, then let’s look at it in a document light. If it is a sure win for them then why not play Memphis since it was already scheduled instead of chickining out????

They are hoping Southern Miss gets back to being Southern Miss(a program with 10 straight bowl games and 18 winning seasons I a row) and that Arkansas St continues to rise up. Strength of schedule is a big factor so they are trying to beef up their SOS. Makes perfect sense to me Memphis has been terrible in football lately.

Memphis is a nobody and I seriously doubt Miami, a team that has Florida on their schedule this year and Nebraska the next couple of years. They just played Ohio State and Oklahoma two times each (splitting 1-1 with both of them) and playing VT and FSU every year. So I very much doubt being ‘afraid’ of Memphis was a factor..LOL S. Miss traditionally has been a decent football program except for the last couple of years. Who has Memphis even beaten in the past 20 years that is of note nationally..LOL

I look forward to playing Southern Miss, they are a solid program and have been one for years.

Memphis does suck and I can’t fathom why Miami ever scheduled them at all, but since you asked, their win over Peyton Manning and #6 Tennessee was in the timeframe (1996).

Have you seen your schedule over the last 15 years do you really think the Dawgs can laugh at many people, The SEC is the most dominant conference right now but it wasn’t always like that an you know it.

So many people forget to know their History and those who do fail, U need to get past the Herchel Walker Era, Cause the dogs ain’t won at Title since win. Now laugh at that.