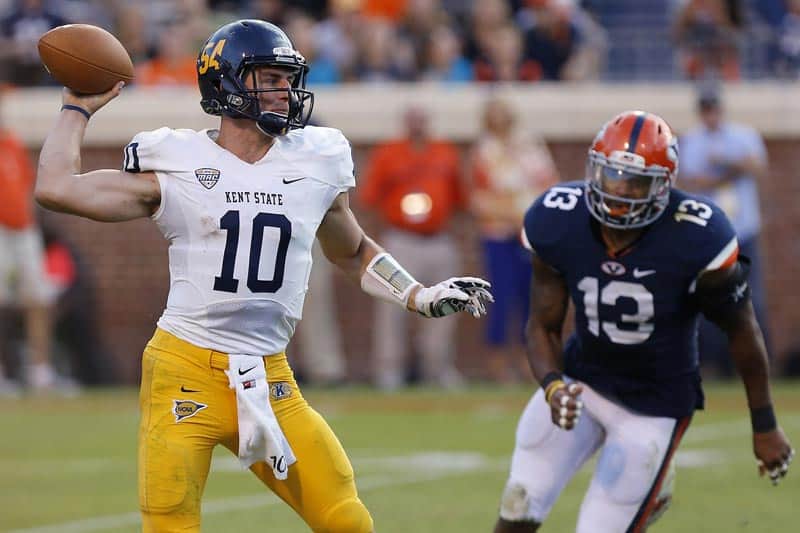 The Kent State Golden Flashes have added games against Alabama, Howard, and Kennesaw State to their future football schedules, FBSchedules.com has learned through records obtained from KSU.

Kent State will travel to face the Alabama Crimson Tide at Bryant-Denny Stadium in Tuscaloosa on Sept. 24, 2016. The Golden Flashes will receive a $1.5 million guarantee for playing the game, according to a copy of the contract.

Alabama and Kent State’s first and only meeting took place in Tuscaloosa in 2011. The Crimson Tide won that contest 48-7.

Kent State will play Howard, an FCS program they’ve never faced, in consecutive seasons. The Golden Flashes are set to host the Bison at Dix Stadium in Kent, Ohio on Sept. 9, 2017 and Sept. 8, 2018.

Howard will receive a $290,000 guarantee for each game played against Kent State.

Kent State opens the 2017 season at Clemson (Sept. 2) and also travels to Marshall (Sept. 16). The Golden Flashes need one more game to complete their 2017 slate.

Kent State has also added a pair of games against another FCS opponent. The Golden Flashes will host the Kennesaw State Owls at Dix Stadium on Thursday, Aug. 29, 2019 and again on Thursday, Sept. 3, 2020, both season-openers.

Kennesaw State, which is located in Kennesaw, Georgia, recently started their football program. They begin play in 2015 and will be a member of the Big South Conference in the Football Championship Subdivision.

LOL.. Bama are willing to play 1.5 mil for a pay game b/c they are too cowardly to play a home and home or go to 9 game conf schedule. Btw, SEC fools who think 6-1-1 format makes since with 14 teams the low level FBS schools are laughing all the way to the bank extorting you for 1.5 mil to play and it’s only going to get worse. Besides making no sense to play 8 games with 14 teams b/c you play 6 teams in your conf twice over 12 years, the other reason the B10 did it was the ridiculous cost of pay games which at that time they made the decision averaged 900K. You not only save the cost of 1 pay game(now whih are 1 mil+ and growing) a year but also help build/maintain rivalries by cross division games among your top teams more. In a 6-3 format parity scheduling Nebraska and OSU will play 4 times in 6 years cross division. I guess the people in the SEC aren’t smart enough to want to see Bama/UF or Bama/GA for example 4 in 6 years instead of twice in 12 years. They prefer to see another cream puff game.

LOL @ you! It never fails, Alabama and SEC haters do all they can to trash the conference and mention “cupcakes”, yet they often go to great lengths, like yourself, not to reveal which team they actually pull for due to the fact that the entire world would be laughing hysterically for the next two hours because of your hypocritical comments. Your jealousy is overwhelming, and jealousy is the greatest form of flattery. So, on behalf of SEC fans everywhere, keep bringing the heat, we feed on it. Whether we are receiving anger, jealousy, or love, we are continuously being discussed, which obviously means we are more than relevant. When the comments end and the haters turn away, that’s when you know you’re not being taken seriously, and are no longer at the top of your game. Thanks for keeping us more relevant than ever!

Schoup,
Some of your points have merit but why all the hate of the South and name calling of Southerners? No point in all of that. You could make you point without being nasty about it…..

What name calling? The SEC conference is the strongest football conference but the SEC scheduling format is indeed “foolish”. For a defender of tough SEC football you have some thin skin.

One P5 opponent + 2 SunBelt/CUSA/MAC/AAC opponents + one FCS opponent (all mostly played at home) does NOT equal a quality/balanced non-conference schedule.

Within the SEC there are a lot of mixed thoughts on the way the SEC schedules. Eventually the SEC will move to a 9-game schedule. SEC leaders will soon figure out that the SEC Network revenue (and for other TV network contracts) will improve by having a larger inventory of SEC vs SEC games, versus SEC vs SunBelt/CUSA games. And at the same time more balanced schedules will grow from that. Some leaders of SEC institutions are having trouble seeing the long term and are shortsighted trying to protect fading legacies.

But hard to give too much credit to SEC fans who enjoy the following non-quality non-conference schedules:

The home-and-home rivalry games save the non-conference schedules for South Carolina, Florida, Georgia, and Kentucky. But what about other SEC programs?vGiving Missouri and Texas A&M a temporary grace due to conference transition. Indeed the Aggies have future home-and-homes scheduled with UCLA and Oregon. And Miss St is finally trying to turn the corner scheduling home-and-homes with Kansas St, Arizona and NC St. And LSU has a series with Syracuse, UCLA and Arizona St. Arkansas has TCU, Texas Tech, Michigan and Texas. Auburn has Kansas St and Clemson. Georgia has Clemson and Notre Dame. The Vols have a series with Oklahoma and USC.

But what about Alabama and Ol Miss? Alabama is addicted to one “neutral site” game and three powder puffs each season. Home and home does not appear in the Alabama dictionary. Mississippi is even worse with four lesser quality non-conference opponents per year.

Count on the playoff committee observing the overall and specific weaknesses of SEC non-conference schedules and grading accordingly. Ouch!

eventually SEC fans will say enough is enough with all the cream puffs and cupcakes that the SEC is addicted too. The SEC mentality is that we are so tough that we need to feast on cream puffs to the detriment of nearly everyone else. The guiltiest team is Florida who has not played a non league game outside of Gainesville since Reagan was in office. They lost a west coast bowl game (Freedom Bowl) to Washington 34-7 in 1989. Most SEC teams like to play only in Central or East Coast time zones. How about Georgia vs Alabama in mid November instead of Elon, Presbyterian, ULL, UT Martin,, the Citadel or Coastal Carolina? Come on SEC backers, tell me again why you need all of those home game cupcakes and then play all of your bowl games within a few hours drive?

Is it really more important to beat New Mexico St. or MIddle Tennessee or Elon 55-3 and pay them 1.2 million than play another conference game?

I don’t really see any of these top schools with an outstanding OOC schedule. That shouldn’t even be in the argument. You got to look at conference schedule. There are great teams in each conference, but when you look at talent, the SEC has had more players drafted in the NFL for 8 years in a row. The SEC is on their run, just like the BIG 10 and Notre Dame and USC have had. BTW- I have already lost faith in the playoff system. BAD IDEA!

I don’t really like Nick Saban; however, I have strong respect for what he has done here. Saban played and coached at Kent State and has chosen to use his influence and position to help his old school out. Tremendous gesture. For that (only) I applaud him.

Really, because he also coached at MSU and now that they look like they’re going to be a good squad for some time he tucked his tail between his legs and 86’d the home-and-home.

Dave you are so right! Always having 3-4 punching bag games always at home inflates the win/loss column and the pompous attitude of the AD’s and overpaid coaches than playing real challenging teams.

Why does the SEC rarely play big nonconference games?
The only ones that I can remember of recent times are Tennessee’s home/homes with Oregon and UCLA, Oregon vs LSU in Arlington TX, and Tennessee vs Cal when they ran all over the Vols. Florida also lost to the U last year, and Georgia lost to Clemson last year. Florida got manhandled in the Sugar Bowl against Louisville, and Alabama lost to Oklahoma the following year. Alabama also lost to Utah in 2008.
Are they just too scared?

You seem to remember all the losses, what about the wins. Bama beat Texas & Notre Dame. Florida beat OSU, Penn St, Cincinnati & Oklahoma & The U. Georgia played home/n/home with Zona St & one game with Colorado in Boulder. LSU had home/n/home with Washington & won both also you forgot about LSU beating Oregon in Dallas a couple years back. Georgia returned the favor to Clemson this year, LSU beat Wisconsin, Bama beat West Virginia. Ole Miss beat Texas & Boise St. Not sure if the SEC is really scared of losing games. You can’t pick & choose what you remember. But you can’t win them all either.

I notice that in 2018 Kent state plays Ill. and Penn State but I guess that Kent State needs to play a couple of punching bag games.

Tennessee and LSU have indded had the courage to play home-and-homes with west coast programs and continue to do so. And Texas A&M schedule shows a similar future.

However what’s the excuse for Alabama and Auburn? And Georgia cancelled a home-and-home with Oregon.

Not cherry picking at all. Evan wants to ask why the SEC does not play big non-conference opponents & from what they remember all the games were losses. So I mentioned all the wins. Tennessee & LSU are doing a great job in future scheduling & Georgia canceling the Oregon game is not that big of a deal, it was mutually, no buy out. Please keep in mind that Georgia plays Ga.tech & just picked up ND for home/n/home. As for Bama & Auburn, neutral sites work for them right now & when or if they stop working then that will be it for neutral site games, I have no control over it, I just enjoy at the beginning of the season. They are exciting, like you said, good for recruiting, big pay checks, great for television & the cities there are in. If the teams or fans suffered from they then there would be none but of course they are popping up all over, may be a fad, may be the future.

Why would you want to play a home and home with Kent State. Ala seats over 100,000 thousand fans that the reason they can pay Kent State 1.5 million to play them in Alabama. the small college like the big pay days and it helps out their bottom line.

Bama as usual scheduling cupcakes. So only 8 conference games total. 8 home games of which 2 against FCS lames, then the likes of SEC jokes like Kentucky, Vandy, Ark, Mizzou, etc.
But hey they might play a “NEUTRAL” site game down south in Dallas, Houston or Atlanta so thats a home game also. Can 3/4 of the SEC travel up north in November rather than play Georgia Southern or Chattanooga? Or go out west, its ok to play home and home series SEC, don’t be scared to get exposed. You’re already likely playing a bowl game down south so your fans can travel to that and make that a home game also. Lets start a SEC chant. Some of us can see thru your scheduling, those of us that aren’t foolish cool-aid drinkers.