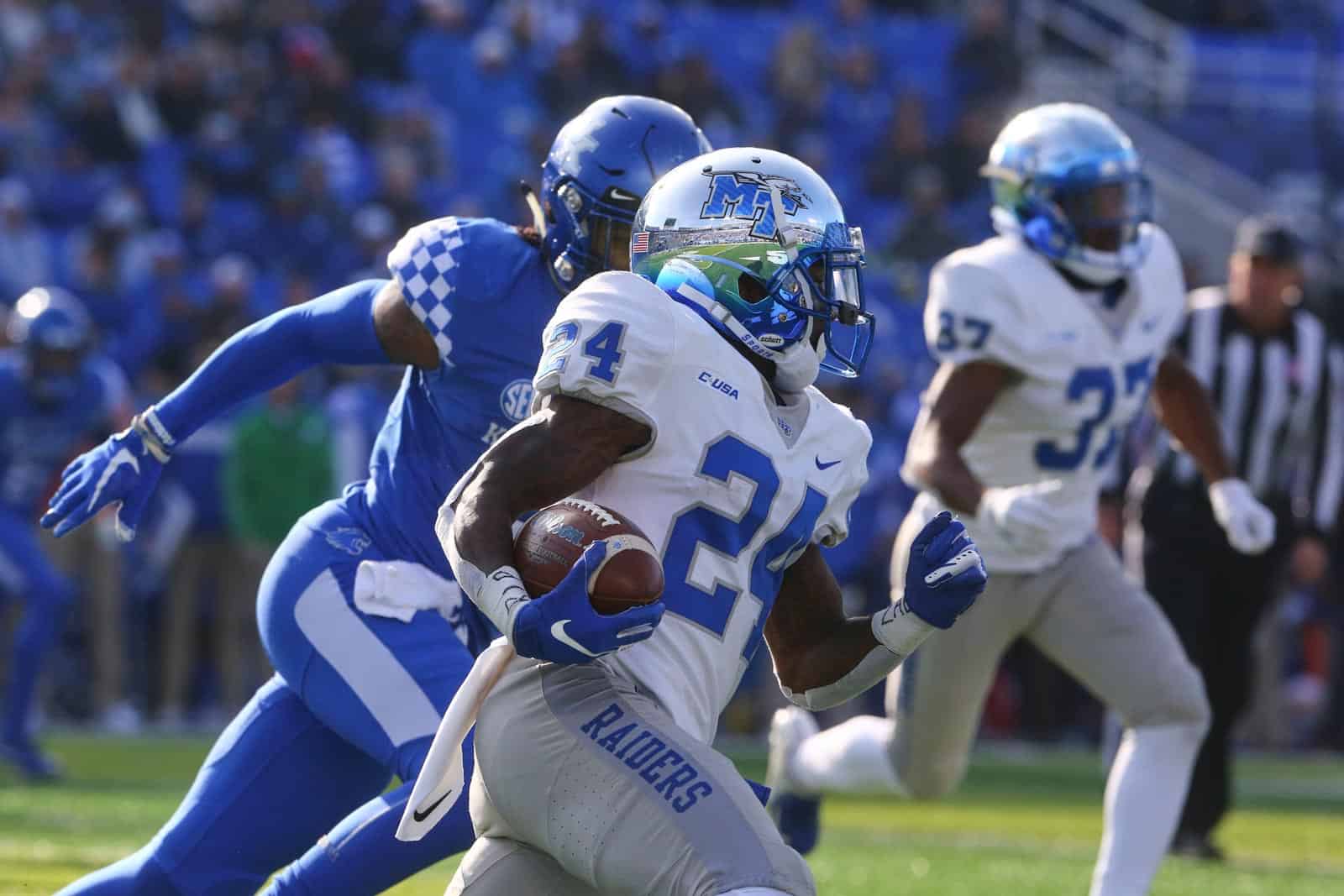 While the exact origin of the phrase “Go big or go home” is unknown, the following seven Group of 5 programs are living its meaning in 2019.

Where the bulk of such programs have slated one or two Power opponents this season, the teams mentioned here have three almost-impossible tasks lined up. It’s, at minimum, a one-game disadvantage for the bold. And, in comparison to programs like Marshall – which has zero Power foes – it’s a legitimate three-game swing.

It’s something worth keeping in mind when the dust settles on 2019 and all that remains is a list of wins and losses. Even though there won’t be an asterisk next to their names – reminding us that these teams played a more difficult schedule than their counterparts – their path to bowl eligibility will have been substantially more difficult.

By conference, the list is almost split evenly between three leagues – C-USA, the Mountain West, and the MAC. The American has one while the Sun Belt isn’t represented.

Notre Dame and BYU are both counted as Power opponents in this exercise.

Hawaii goes from playing just one Power opponent (technically, as it was BYU) a year ago to a whopping three this season. The Warriors scheduled three Power 5 members as recently as 2016 when they dropped games vs. Cal, at (7) Michigan. and at Arizona. They haven’t beaten a big boy since opening the 2015 campaign with a 28-20 home win over Colorado.

Kent State’s difficulty level is amped up with two of its three Power opponents receiving mention in USA Today’s post-spring Top 25. Auburn is No. 16 while Wisconsin slipped in at No. 25. This is the second-straight season that the Golden Flashes have booked three Power foes – losing at Illinois, at (10) Penn State, and at Ole Miss in 2018. Their last win over a current P5 member came in 2012 when they knocked off (18) Rutgers 35-23 on the road.

No stranger to “going big” this is Middle Tennessee’s third-consecutive season with a trio of Power opponents on its slate, posting a 1-5 mark along the way. In 2018, the Blue Raiders lost at Vanderbilt, at (3) Georgia, and at (20) Kentucky and in 2017 they fell at home vs. the Commodores and at Minnesota. The sole win came that same season at Syracuse, a 30-23 victory over an Orange team that was a ten-point favorite.

Northern Illinois gets all its Power action consecutively (minus a Sept. 21 bye) and on the road. By the time Week 5 rolls around, the Huskies ought to be ready to play anybody. That’s precisely how it went down last season – NIU started the season 1-3 with a win over Central Michigan and losses at Iowa, vs. Utah, and at Florida State. After regrouping, the Huskies went 7-2 down the stretch, including edging Buffalo in the MAC championship game. NIU’s most recent win over a P5 opponent came in 2017 when it waltzed into Lincoln as an 11-point underdog and knocked off Nebraska 21-17.

Rice has consistently booked two Power 5 programs every season since 2011, when it scheduled four such opponents. The Owls dropped games at Texas, at (17) Baylor, and at Northwestern that season but managed a 24-22 upset win over Purdue at home. Rice’s most recent win over a P5 opponent came in 2013, when it hosted Kansas and won 23-14.

Utah State also booked three games with teams classified as Power schools in 2017 – falling at (9) Wisconsin and at Wake Forest but beating BYU at home. The Aggies also beat the Cougars in 2018, pounding them 45-20 in Provo. They haven’t beaten a true Power 5 member since 2014, when they hosted the Demon Deacons and won 36-24.

USF recorded two wins over Power 5 teams last season after defeating Georgia Tech at home, 48-38, and Illinois at Soldier Field in Chicago, 25-19. The Bulls last scheduled three Power Five non-conference opponents in the same season in 2015 when they lost at Florida State and Maryland and defeated Syracuse in Tampa.

CORRECTION: A previous version of this article did not include USF.

For what possible reason would you include BYU as power 5..by no metric are they power 5 and several group of 5 programs are superior to BYU

Because they are considered a P5 for scheduling purposes by several conferences.

What metric defines a P5? If it’s part of a P5 conference, then kick out ND as well. If it’s by performance, BYU certainly does. If you’re going to tell me Vanderbilt, Kansas, Purdue, Illinois, Oregon State, Maryland, Rutgers, Virginia, etc., are P5, but BYU isn’t on their level, I’m going to call you crazy, and/or Utah Ute fan.

lol BYU as a P5 is a completely arbitrary thing. A couple of conferences include Army but don’t include Navy or Air Force which makes absolutely zero sense.

I hope that the payoff from those 3 roads will cover all of the medical expenses incurred.

True, but NMSU is Independent, not Group of 5.

No, because only the Power conferences have scheduling mandates that include Army, BYU, Notre Dame and some others as P5 teams.

So the G5 teams don’t count the independents as P5 teams? So this article about G5 teams playing P5 team is misleading because the G5 don’t count BYU as P5.

Just add NMSU, or remove USF and Utah State. The absence of the former while the presence of the latter two completely questions the credibility of the writer. If you want I can write the blurb for you.

It’s not the writers fault that the P5 conferences arbitrarily select who counts as a P5 and who doesn’t.

I think N. Illinois has a chance to win all three. I know Utah and Nebraska are ranked in the 2nd half of the top 25 but they have won some big games before.